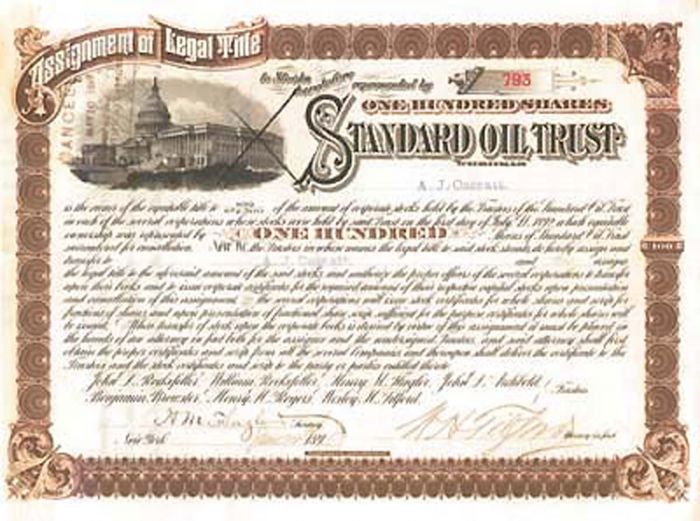 Years: 1895
STANDARD OIL TRUST. 100 share certificate signed by Henry M. Flagler and W.H. Tilford, both very important officers in the Standard Oil Trust. Most importantly, it was issued to A.J. Cassatt and signed at the back. Cassatt was a civil engineer and Railroad executive. As President of Penn Railroad he nearly doubled their earnings. He was the brother of the extremely famous artist, Mary Cassatt.

Cassatt more than doubled the Pennsylvania Railroad's total assets during his term, from $276 million to $594 million (an increase of 115 percent). Track and equipment investment increased by 146 percent. The route from New York through Philadelphia, Harrisburg and Altoona to Pittsburgh was made four-tracked throughout, Pennsy's "Broad Way". Many other lines were double-tracked; almost every part of the system was improved. New freight cutoffs avoided stations; grade crossings were eliminated, flyovers were built to streamline common paths through junctions, terminals were redesigned, and much more. Cassatt initiated the Pennsy's program of electrification which led to the road being the United States' most electrified system.

Cassatt died in 1906 after a six-month illness. He was succeeded as Pennsylvania Railroad president by James McCrea.

Henry Morrison Flagler
(1830-1913)
Through the grain and distillery business, he met John D. Rockefeller, in Bellevue, Ohio. After a business disaster as a salt manufacturer in Saginaw, Michigan, he moved to Cleveland and soon joined Rockefeller and chemist and inventor Samuel Andrews in forming Rockefeller, Andrews & Flagler in 1867, which they were soon to develop into Standard Oil. By 1872, it led the American oil refining industry, producing 10,000 barrels per day.

Wesley Hunt Tilford was born in Lexington, Kentucky, on July 14, 1850. His boyhood was spent there. His father, John B. Tilford, had long been a banker in Lexington, but at the close of the sixties, he pulled up stakes, and came to New York, where he once more took up the banking business. Young Wesley went to Columbia College where he studied for a couple of years, but the call of business was too strong to allow him to wait for his bachelor's degree. His elder brother, John B. Tilford, Jr., had entered the fleld of oil, associating himself with Jabez A. Bostwick in the firm of Bostwick & Tilford. Attracted by the prospects of petroleum, Wesley gave up his college course, and entered as a clerk in the firm of his brother, then doing business in Pearl Street. When the firm dissolved the two brothers joined in a partnership of their own under the title of John B. Tilford Jr. & Co., which did well from the start and continued to prosper until, at the period of the Eastern oil amalgamations, a substantial offer from the Standard Oil Company induced them to cast their fortunes with that vigorous organization. As has been said, those were busy formative times in the oil business, and the new recruit proved his mettle by the splendid success of his visit to the Pacific slope in 1878. He there organized the oil trade in California, Oregon, Colorado and the surrounding States. On his return to the East he was welcomed to a high place in the home office, taking charge of the vast transportation problem with vigor and effectiveness. And so, strong in the esteem and confidence of all his co-workers, he continued to the end. He was a member of the New York Chamber of Commerce and belonged to the Metropolitan and Tuxedo Clubs.

Tilford, one of the Vice Presidents of the Standard Oil Company, left behind him a notable record of over thirty years in the service of the Company and of some years before that in a petroleum business with which his family was connected. ln his time he had passed through all grades of the merchandising of petroleum, filling post after post with loyalty, credit and acumen. For nine years before his elevation to the Vice Presidency in 1908, he had filled the office of Treasurer of the Standard Oil Company, and from 1892 onward he had been a Director. Despite this long and prominent career, few outside the oil business knew him, so unobtrusive was he by nature. He was a man of few words but of great grasp of affairs, particularly strong in organizing qualities, and gifted with fine and accurate judgment. ln addition he was a man of wide information and varied reading. He was courtly, kind-hearted and charitable. The great good fortune of the Standard Oil Company was the securing of the service of such a man. Ordinary qualities sharpened by business experience may carry a man safely through the details of an established business easily filling its place in the commercial economy; but to win and retain a leading place in a business ever growing, ever reaching out, ever conquering new worlds and gaining and holding new markets, called for qualities far beyond the ordinary, and it is the testimony of his associates that he always deserved his promotions. This is high praise from men themselves the peers of the giants of business in all ages and all climes.