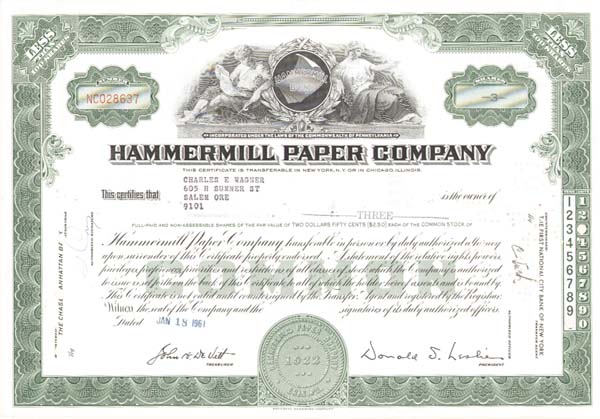 Male and Female figures seated on each side of 'Hammermill Bond' logo. Available in Orange or Green. Please specify color.

Hammermill Paper Company is an American paper manufacturer originally founded in 1898 as the Ernst R. Behrend Company. The company was purchased in 1986 by International Paper Company, where the namesake survives as a brand of paper.

Hammermill Paper Company was founded in 1898 by the brothers Ernst, Otto, and Bernard Behrend and their father Moritz Behrend in Erie, Pennsylvania. Ernst served as President and Otto, secretary. Construction of their first paper mill, in Erie, began that same year.

Behrend changed the name of the company before the first mill even opened in honor of his father's papermills in Germany. The company expanded by buying a mill in Oswego, New York, that was making copier paper exclusively for Xerox. In the 1960s, mills were acquired in Lock Haven, Pennsylvania and near Selma, Alabama. In 1962, they bought the Strathmore Paper Company. After a failed takeover by Paul Bilzerian and brothers William and Earle I. Mack (sons of New Jersey real estate developer H. Bert Mack), Hammermill was purchased in 1986, by International Paper Company, with customer services and operations moving to their Memphis headquarters in 1988.