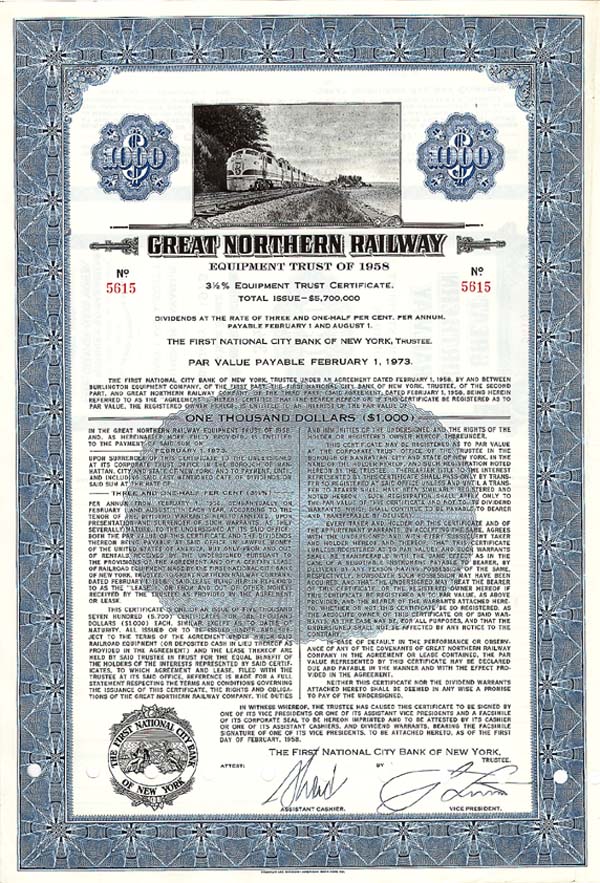 The Great Northern Railway (reporting mark GN) was an American Class I railroad. Running from Saint Paul, Minnesota, to Seattle, Washington, it was the creation of 19th-century railroad entrepreneur James J. Hill and was developed from the Saint Paul & Pacific Railroad. The Great Northern's route was the northernmost transcontinental railroad route in the U.S.

The Great Northern was slowly built in stages, slowly creating profitable lines, before extending the road further into the undeveloped Western territories. In a series of the earliest public relations campaigns, contests were held to promote interest in the railroad and the ranchlands along its route. Fred J. Adams used promotional incentives such as feed and seed donations to farmers getting started along the line. Contests were all-inclusive, from largest farm animals to largest freight carload capacity and were promoted heavily to immigrants and newcomers from the East.

The very first predecessor railroad to the company was the St. Paul and Pacific Railroad owned by William Crooks. He had gone bankrupt running a small line between St. Paul and Minneapolis. He named the locomotive he ran for himself and the William Crooks would be the first locomotive of the Great Northern Railway. J.J. Hill convinced New York banker John S. Kennedy, Norman Kittson (a wealthy fur trader friend), Donald Smith (a Hudson's Bay Company executive), George Stephen (Smith's cousin and president of the Bank of Montreal), and others to invest $5.5 million in purchasing the railroad. On March 13, 1878, the road's creditors formally signed an agreement transferring their bonds and control of the railroad to J.J. Hill's investment group. On September 18, 1889, Hill changed the name of the Minneapolis and St. Cloud Railway (a railroad which existed primarily on paper, but which held very extensive land grants throughout the Midwest and Pacific Northwest) to the Great Northern Railway. On February 1, 1890, he consolidated his ownership of the StPM&M, Montana Central Railway, and other rail lines to the Great Northern.

The Great Northern had branches that ran north to the CanadaUS border in Minnesota, North Dakota, and Montana. It also had branches that ran to Superior, Wisconsin, and Butte, Montana, connecting with the iron range of Minnesota and copper mines of Montana. In 1898 Hill purchased control of large parts of the Messabe Iron Range in Minnesota and its rail lines. The Great Northern began large-scale shipment of ore to the steel mills of the Midwest.

The railroad's best-known engineer was John Frank Stevens, who served from 1889 to 1903. Stevens was acclaimed for his 1889 exploration of Marias Pass in Montana and determined its practicability for a railroad. Stevens was an efficient administrator with remarkable technical skills and imagination. He discovered Stevens Pass through the Cascade Mountains, set railroad construction standards in the Mesabi Range, and supervised the construction of the Oregon Trunk Line. He then became the chief engineer of the Panama Canal.

The logo of the railroad, a Rocky Mountain goat, was based on a goat William Kenney, one of the railroad's presidents, had used to haul newspapers as a boy.

The mainline began at Saint Paul, Minnesota, heading west along the Mississippi River bluffs, crossing the river to Minneapolis on a massive multi-piered stone arch bridge just below the Saint Anthony Falls. The bridge ceased to be used as a railroad bridge in 1978 and is now used as a pedestrian river crossing with excellent views of the falls and of the lock system. The mainline headed northwest from the Twin Cities, across North Dakota and eastern Montana. The line then crossed the Rocky Mountains at Marias Pass. It then followed the Flathead River and then Kootenai River to Bonners Ferry, Idaho, south to Sandpoint, Idaho, west to Newport, Washington, and then to Spokane, Washington. The extensive railroad facility of Hillyard, Washington was built along the line. From there the mainline crossed the Cascade Mountains through the Cascade Tunnel under Stevens Pass, reaching Seattle, Washington, in 1893, with the driving of the last spike at Scenic, Washington, on January 6, 1893.

The mainline west of Marias Pass has been relocated twice. The original route over Haskell Pass, via Kalispell and Marion, Montana was replaced in 1904 by a more circuitous but flatter route via Whitefish and Eureka, joining the Kootenai River at Rexford, Montana. A further reroute was necessitated by the construction of the Libby Dam on the Kootenai River in the late 1960s. The United States Army Corps of Engineers built a new route through the Salish Mountains, including the 7-mile-long Flathead Tunnel, second-longest in the United States, to relocate the tracks away from the Kootenai River. This route opened in 1970. The surviving portions of the older routes (from Columbia Falls to Kalispell and Stryker to Eureka), are now operated by Watco as the Mission Mountain Railroad.

The Great Northern mainline crossed the continental divide through Marias Pass, the lowest crossing of the Rockies south of the CanadaUS border. Here, the mainline forms the southern border of Glacier National Park, which the GN promoted heavily as a tourist attraction. GN constructed stations at East Glacier and West Glacier entries to the park, stone and timber lodges at the entries, and other inns and lodges throughout the Park. Many of the structures have been listed on the National Register of Historic Places due to unique construction, location, and the beauty of the surrounding regions.

In 1931 the GN also developed the "Inside Gateway", a route to California that rivaled the Southern Pacific Railroad's route between Oregon and California. The GN route was further inland than the SP route and ran south from the Columbia River in Oregon. The GN connected with the Western Pacific at Bieber, California; the Western Pacific connected with the Atchison, Topeka, and Santa Fe in Stockton, California, and together the three railroads (GN, WP, and ATSF) competed with Southern Pacific for traffic between California and the Pacific Northwest. With a terminus at Superior, Wisconsin, the Great Northern was able to provide transportation from the Pacific to the Atlantic by taking advantage of the shorter distance to Duluth from the ocean, as compared to Chicago.

The Great Northern energetically promoted settlement along its lines in North Dakota and Montana, especially by Germans and Scandinavians from Europe. The Great Northern bought its lands from the federal government  it received no land grants  and resold them to farmers one by one. It operated agencies in Germany and Scandinavia that promoted its lands, and brought families over at low cost, building special colonist cars to transport immigrant families. The rapidly increasing settlement in North Dakota's Red River Valley along the Minnesota border between 1871 and 1890 was a major example of large-scale "bonanza" farming.

During WWII the Army moved its Military Railway Service (MRS) headquarters to Fort Snelling, MN. The MRS worked collaboratively with commercial railroading in the U.S. The Great Northern sponsored the 704th Grand Railroad Division. It was the second Grand Division that the Army stood up. The Great Northern also sponsored the 732nd Railroad Operating Battalion (ROB). They were one of two spearhead ROBs. The 732nd operated in support of the Patton's 3rd Armored Division crossing into Germany with them. The Officers of the 732nd were all previous employees of the Great Northern.

The Great Northern Railway is considered to have inspired (in broad outline, not in specific details) the Taggart Transcontinental railroad in Ayn Rand's Atlas Shrugged. The railroad is mentioned in the lyrics of the Grateful Dead song Jack Straw: "Great Northern, out of Cheyenne, from sea to shining sea".

In Season One of Hey Arnold, the episode "Haunted Train" depicts the fictitious Engine 25, a 4-8-2 under the GNR mantle wrecked near Arnold's hometown due to a psychotic engineer. Now the ghost of the train apparently picks up unsuspecting passengers and takes them to Hell, driven by the insane engineer.

In addition to the Stone Arch Bridge, parts of the railway has been turned into pedestrian and bicycle trails. In Minnesota, the Cedar Lake Trail is built in areas that were formerly railroad yards for the Great Northern Railway and the Minneapolis and St. Louis Railway. Also in Minnesota, the Dakota Rail Trail is built on 26.5 miles of the railroad right-of-way. Further west, the Iron Goat Trail in Washington follows the late 19th-century route of the Great Northern Railway through the cascades and gets its name from the railway's logo.