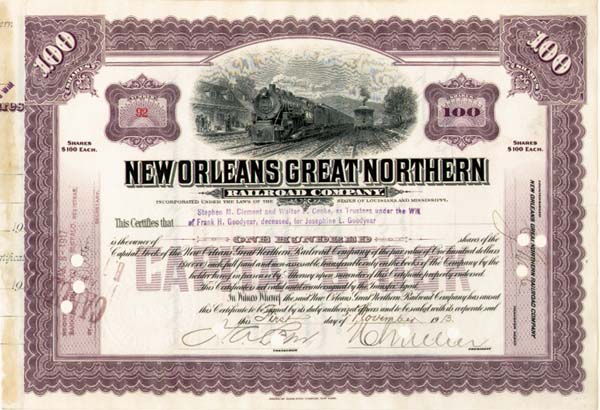 The New Orleans Great Northern (also known as the Nogan), like the Meridian and Memphis, the Jackson and Eastern, most of the Gulf, Mobile and Northern, and countless other segments of railroads in Mississippi, was built for the primary, purpose of serving as a lumber hauling road. The line was developed by a group of wealthy Yankee lumbermen who began their operations in the Mississippi timber regions after 1900. This group, led by F. H. and C. W. Goodyear, of Buffalo, New York, purchased a tremendous amount of standing timber in the southwestern part of Mississippi and adjacent areas of Louisiana. Their plan was to erect a large-scale sawmill somewhere in the vicinity of their holdings and to process their timber at this central point. Since there was no railroad through much of their holdings, the group, of necessity, had to build a line to haul their timber to the mill and the lumber to market. After extensive study, the group decided to build the Great Southern Lumber Company at the site of what is now the city of Bogalusa, Louisiana. The town was built alongside Bogue Lusa Creek and thus received its unusual name. There was no town, lumber mill, or railroad when the project started, so all three essentials to this operation were begun at about the same time. The plan called for a town to house 8,000 people, a mill to manufacture a million feet of lumber each day, and a railroad some 200 or more miles long to run between New Orleans and Jackson, Mississippi by way of Bogalusa. The New Orleans Great Northern Railroad Company was incorporated under Louisiana law on January 27, 1905. A sister concern, the New Orleans Great Northern Railroad Company of Mississippi, was incorporated on May 9, 1905, and the two companies were merged into one under the Louisiana charter on August 6, 1906. On June 1, 1905, the New Orleans Great Northern bought the East Louisiana Railroad (which had been incorporated on July 8, 1887 to buy, build, or operate a railroad in certain sections of Louisiana and Mississippi). This line had been started by a group of local businessmen whose principal purpose was to open up the timber reserves in the area north of Lake Pontchartrain. The principal properties of the East Louisiana were acquired from the Poitevant and Favre Lumber Company of Mandeville, Louisiana, which had built a log road from Florenville, Louisiana, to a point on West Pearl River near the present town of Pearl River, Louisiana. In 1929, the Gulf, Mobile & Northern Railroad took control of the line through a stock exchange agreement. The agreement allowed the Nogan to operate as a separate corporate entity. Earlier the GM&N and the Chicago, Burlington & Quincy Railroad had entered into a traffic agreement with the Nogan. This stock exchange program authored by the GM&N was proposed basically to protect the Nogans New Orleans line, which was considered vital to the GM&Ns future. In 1932, as a result of its heavy debt load, the Nogan fell into receivership. A year later, the company emerged as a the re-organized New Orleans Great Northern Railway. It was immediately leased for a period of 99 years to the GM&N, and subsequently controlled by the GM&N and the Gulf, Mobile & Ohio Railroad.