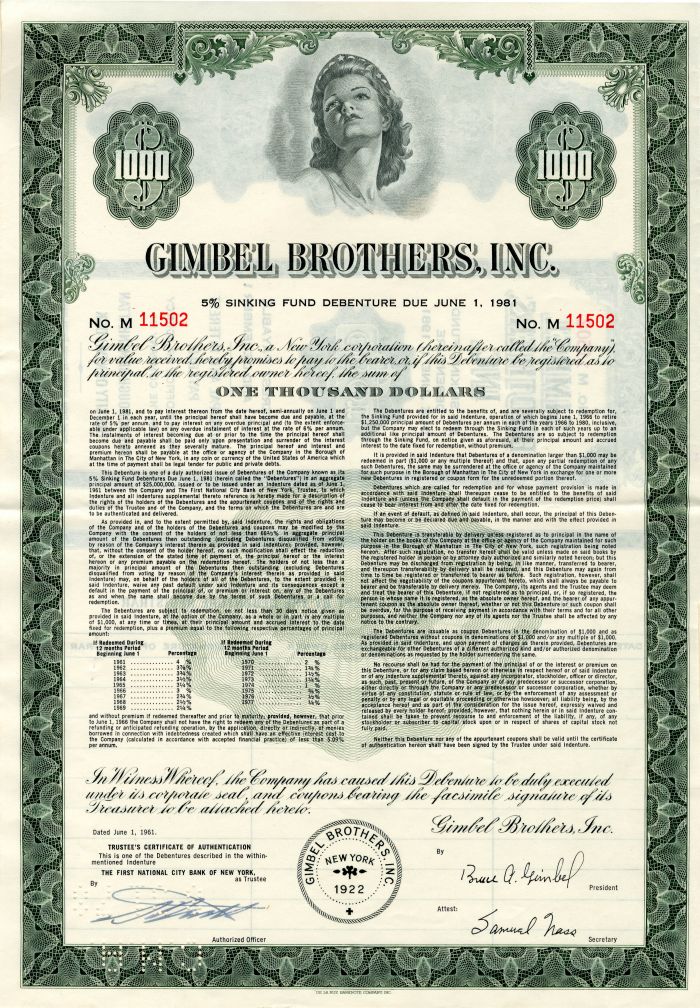 Gimbel Brothers (Gimbels) was an American department store corporation that operated for a century, from 1887 until 1987. Adam Gimbel opened his first store in Vincennes, Indiana, in 1842. In 1887, the company moved its operations to the Gimbel Brothers Department Store in Milwaukee, Wisconsin, then became a chain when it opened a second, larger store in Philadelphia, Pennsylvania in 1894, moving its headquarters there. At the urging of future company president Bernard Gimbel, grandson of the founder, the company expanded to New York City in 1910.

The company is known for creating the Gimbels Thanksgiving Day Parade, started in 1920 in Philadelphia. As of 1930, Gimbels had grown to 20 stores, whose sales revenue made it the largest department store chain in the world. The company expanded to a peak of 53 stores by 1965, and closed in 1987 with 35 stores in Pennsylvania, New York, New Jersey, Wisconsin, and Connecticut.

The company, founded by a young Bavarian Jewish immigrant, Adam Gimbel, began as a general store in Vincennes, Indiana. After a brief stay in Danville, Illinois, Gimbel relocated in 1887 to Milwaukee, Wisconsin, which was then a boomtown. The new store quickly became the leading department store in Milwaukee. However, with seven sons, Adam Gimbel saw that one store, no matter how successful, would not accommodate his family's future.

In 1894, Gimbelsthen led by the founder's son, Isaac Gimbelacquired the Granville Haines store (originally built and operated by Cooper and Conard) in Philadelphia, Pennsylvania, and in 1910, opened another branch in New York City. With its arrival in New York, Gimbels prospered, and soon became the primary rival to the leading Herald Square retailer, Macy's, whose flagship store was located a block north. This rivalry entered into the American popular argot as "Does Macy's tell Gimbels?", an idiom used to brush off any query about matters the speaker didn't wish to divulge. To distinguish itself from Herald Square neighbors, Gimbels' advertising promised more: "Select, don't settle."

Gimbels became so successful that in 1922 the chain went public, offering shares on the New York Stock Exchange (though the family retained a controlling interest). The stock sales provided capital for expansion, starting with the 1923 purchase of across-the-street rival Saks & Co., which operated under the name Saks Thirty-Fourth Street; with ownership of Saks, Gimbel created an uptown branch called Saks Fifth Avenue. In 1925, Gimbels entered the Pittsburgh market with its purchase of Kaufmann & Baer's. Also acquired in this transaction was Gimbels' third radio outlet, WCAE; the company already owned WGBS in New York and WIP in Philadelphia. Although expansion spurred talk of the stores becoming a nationwide chain, the Great Depression ended that prospect. Gimbel did increase the number of more upscale (and enormously profitable) Saks Fifth Avenue stores in the 1930s, opening branches in Chicago, Boston and San Francisco.

By 1930, Gimbels had seven flagship stores throughout the country and sales of $123 million ($1.9 billion today) across 20 stores; this made Gimbel Brothers Inc. the largest department store corporation in the world. By 1953, sales had risen to $300 million ($2.9 billion today). In 1962, Gimbels acquired Milwaukee competitor Schuster's, and in that region operated stores from both chains for a while as Gimbels Schuster's. By 1965, Gimbel Brothers Inc. consisted of 53 stores throughout the country, which included 22 Gimbels, 27 Saks Fifth Avenue stores, and four Saks 34th St.

Gimbels principles and merchandise sought to reflect the ideals of middle class America. Their principles consisted of "courtesy, reliability, good value, and enlightened management." By using middle class values Gimbels attracted shoppers to a store that also could fit their budgets. Keeping the store plain and less extravagant than some of its competitors, Gimbels used the slogan "the customer pays for fancy frills." Gimbels was about the product, not the aesthetics. By offering a wide range of cutting-edge technology in its merchandise, Gimbels reflected the ideals held by the middle class of staying up to date with technologies and carrying new appliances and merchandise at an affordable price.

Gimbels Department Store offered a variety of merchandise and products, including home appliances, outdoor equipment, furniture, clothing, and much more. With multiple floors in its flagship stores, each floor offered a given category of merchandise. The Philadelphia Gimbels specifically offered fine jewelry, men's clothing, women's clothing, children's clothing, furniture, toys, art supplies, and appliances for the house. This store also contained The Gimbel Auditorium, Television Headquarters, a salon, and music center. With a wide variety of options Gimbels was a one stop shop that made shopping easy and accessible.

Despite its limited presence, Gimbels was well-known nationwide, in part because of the carefully cultivated rivalry with Macy's, but also thanks to an endless stream of publicity. The New York store received considerable attention as the site of the 193940 sale of art and antiquities from the William Randolph Hearst collection. Gimbels also gained publicity from the 1947 film Miracle on 34th Street, the 1967 film Fitzwilly, and was frequently mentioned as a shopping destination of Lucy Ricardo and Ethel Mertz on the hit 1950s TV series I Love Lucy.

The idea of a department-store parade originated in 1920 with Gimbels Department Store in Philadelphia with the parade now known as the 6abc Dunkin' Donuts Thanksgiving Day Parade. The Gimbel family saw the parade as a way to promote holiday shopping at its various store locations. Macy's did not start a parade until 1924. When Gimbels ceased operating in 1986, television station WPVI assumed responsibility for the parade, with sponsorship by Reading, Pennsylvania-based Boscov's. Currently, Dunkin' Donuts is the chief sponsor of the parade.

BATUS initially left the Gimbels chain in the four autonomous divisions that had been established under Gimbel family ownership: Gimbels New York, Gimbels Philadelphia, Gimbels Pittsburgh, and Gimbels Milwaukee. Each division operated independently of each other in advertising and buying. Each division offered their own charge card which could only be used at Gimbels stores in the same division. In 1983, Gimbels New York and Gimbels Philadelphia were combined into a single entity, Gimbels East, in an attempt to reduce operating losses in both divisions.

Deciding that Gimbels was a marginal performer with little potential for increased profitability, BATUS in 1986 decided to close its Gimbels division and sell its store properties. Some of the more attractive branches were taken over by Stern's (Allied Stores), Pomeroy's (Allied Stores), Kaufmann's (May Department Stores, now part of the corporate family of rival Macy's), or P.A. Bergner & Co.'s Boston Store) The cornerstone of the chain, the downtown Milwaukee store where Adam Gimbel had first found success (and alleged to be the most profitable Gimbel store), was handed to BATUS sister division Marshall Field's, but eventually closed in 1997. The downtown Milwaukee building was remodelled in 1998 and now houses a fitness club (formerly a Borders), the headquarters of the American Society for Quality along with other offices, and a 131-room extended stay hotel.

The Gimbels New York City flagship store was located in the cluster of large department stores that surrounded Herald Square, in Midtown Manhattan. Designed by architect Daniel Burnham, the structure, which once offered 27 acres (110,000 m2) of selling space, has since been modernized and entirely revamped. When this building opened, on September 29, 1910, a major selling point was its many doors leading to the Herald Square New York City Subway station. Due to such easy access, by the time Gimbels closed in 1986, this store had the highest rate of "shrinkage", or shoplifting losses, in the world. Doors also opened to a pedestrian passage under 32nd Street, connecting Penn Station to the 34th Street (New York City Subway) and 33rd Street (PATH) stations. This Gimbels Passageway was closed in the 1990s for security reasons during a period of high crime.

The building that housed a Gimbels branch at 86th Street and Lexington Avenue remains, but has been converted to apartments.

In Pittsburgh, Starrett & van Vleck designed the downtown flagship of the Gimbels Department Store, which was built in 1914 at 339 Sixth Avenue. After Gimbels ceased operations in the late 1980s, the building became the Heinz 57 Center. In 1997, it was added to the list of historic landmarks by the Pittsburgh History and Landmarks Foundation.

Gimbels appeared in the 1947 film Miracle on 34th Street.

Gimbels is mentioned in the 1958 film Auntie Mame during the Macy's scene in which Mame meets her future husband Beauregard Jackson Pickett Burnside. Don't forget the skates for the little nippers. Get them at Gimbels!

In the 1997 film Out to Sea, main character Herb Sullivan is retired from Gimbels, where he "survived 48 white sales."

Although the store had been closed for sixteen years, the New York City Gimbels was portrayed as the workplace of some of the main characters in the 2003 film Elf, but exterior shots were filmed at the Textile Building at 295 Fifth Avenue with visual effects added later, while interior shots were filmed in the 34th Street Macy's flagship store.

One of the characters in Happy! is the son of a Gimbels Santa, and a closed Gimbels store appears in the show.

In The Goldbergs, Erica, played by Hayley Orrantia, was portrayed working as a cashier in Gimbels' Philadelphia store. The series, set in the 1980s, also depicts the closing of Gimbels.

Gimbels is mentioned in the fourth-season episode "Operation Mongoose" of the ABC fantasy series Once Upon a Time.

Gimbel Brothers is the department store Number Five breaks into to remove the mannequin Dolores in "Run Boy Run," the second episode of Netflix's The Umbrella Academy.

Gimbels is mentioned in The Simpsons by Agnes during Marge's franchise war. Agnes claimed that she is Macy's and Marge is Gimbels.

The television series The White Shadow also referenced Macy's and Gimbels. In the episode "Car Repo", Vitaglia gives Salami the phone number of a girl they were both pursuing. When Salami asks why Vitaglia hadn't told him he had her number before, he responds, "Does Macy's tell Gimbel's?"