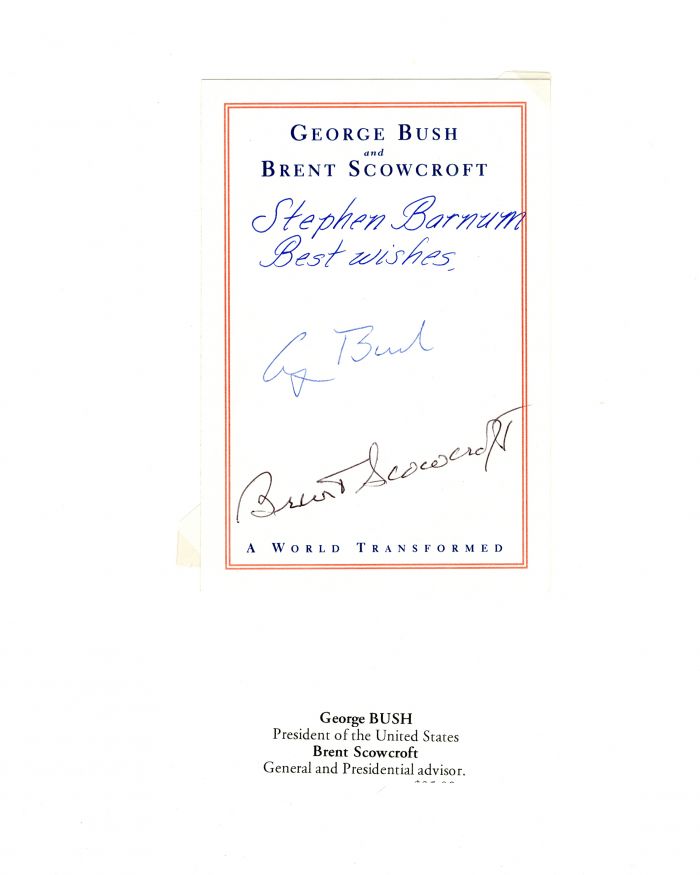 Book Plate signed by both George Bush, President of the U.S. and Brent Scowcroft, General and Presidential advisor.

George Walker Bush (born July 6, 1946) is an American politician and businessman who served as the 43rd president of the United States from 2001 to 2009. A member of the Republican Party, he had previously served as the 46th governor of Texas from 1995 to 2000. Born into the Bush family, his father, George H. W. Bush, served as the 41st president of the United States from 1989 to 1993. Bush is the eldest son of Barbara and George H. W. Bush, and the second son to become the American president after his father, the first being John Quincy Adams. After graduating from Yale University in 1968 and Harvard Business School in 1975, he worked in the oil industry. Bush married Laura Welch in 1977 and unsuccessfully ran for the U.S. House of Representatives shortly thereafter. He later co-owned the Texas Rangers baseball team before defeating Ann Richards in the 1994 Texas gubernatorial election. Bush was elected president of the United States in 2000 when he defeated Democratic incumbent Vice President Al Gore after a narrow and contested win that involved a Supreme Court decision to stop a recount in Florida. He became the fourth person to be elected president without a popular vote victory. In response to the September 11 terrorist attacks, Bush launched a "War on Terror" that began with the war in Afghanistan in 2001. He also launch the Iraq War in 2003, with the administration arguing that the Saddam Hussein regime possessed an active weapons of mass destruction (WMD) program, and that the Iraqi government posed a threat to the United States. Some administration officials falsely claimed that Hussein had an operational relationship with Al-Qaeda, the perpetrators of the 9/11 attack. No stockpiles of WMDs or an active WMD program were ever found in Iraq. Signature legislation passed during his presidency included broad tax cuts, the Patriot Act, the No Child Left Behind Act, the Partial-Birth Abortion Ban Act, the Medicare Modernization Act, and funding for the AIDS relief program known as PEPFAR. In the 2004 presidential race, Bush defeated Democratic Senator John Kerry in a close election. After his re-election, Bush received criticism from across the political spectrum for his handling of the Iraq War, Hurricane Katrina, and other challenges. Amid this criticism, the Democratic Party regained control of Congress in the 2006 elections. In December 2007, the United States entered its longest post-World War II recession, often referred to as the "Great Recession", prompting the Bush administration to obtain congressional approval for multiple economic programs intended to preserve the country's financial system. Bush was among the most popular, as well as unpopular, U.S. presidents in history; he received the highest recorded approval ratings in the wake of the 9/11 attacks, but one of the lowest such ratings during the 2008 financial crisis. Bush finished his second term in office in 2009 and returned to Texas. In 2010, he published his memoir, Decision Points. His presidential library opened in 2013. His presidency has been rated as one of the worst in historians' polls, although his favorability ratings have improved since leaving office.

Brent Scowcroft (/ˈskoʊkrɒft/; born March 19, 1925) is a former United States Air Force officer who was a two-time United States National Security Advisor - first under U.S. President Gerald Ford and then under George H. W. Bush. He also served as Military Assistant to President Richard Nixon and as Deputy Assistant to the President for National Security Affairs in the Nixon and Ford administrations. He served as Chairman of the President's Foreign Intelligence Advisory Board under President George W. Bush from 2001 to 2005 and assisted President Barack Obama in choosing his national security team.