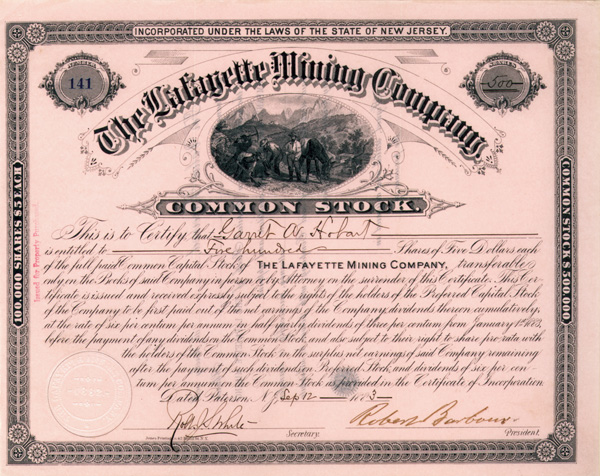 Garrett A. Hobart (1844-1899), Lawyer, and Vice-President of the U.S. under McKinley 1897-99.
The 24th Vice President of the United States. He was born in Long Branch, New Jersey, and grew up in Marlboro Township. He graduated from Rutgers College in 1863. Although the nation was deeply engaged in the Civil War, Hobart did not join the Union army. Instead, he studied law in Paterson, New Jersey, under the tutelage of Socrates Tuttle, a childhood friend of his father's. He became a lawyer in 1866, and on July 21, 1869, married Tuttle's daughter, Jennie. Hobart's family had long been Democrats, but marriage into the Republican Tuttle household converted the young man to the Grand Old Party. Hobart served in the New Jersey General Assembly from 1872 to 1876, serving as speaker in 1874. He was a member of the New Jersey Senate from 1876 to 1882, serving as its president in 1881. It seems startling that someone who never held prior office outside of a state legislature could be nominated and elected Vice President of the United States, as was Garret Augustus Hobart in 1896. By the time convention delegates chose the last nineteenth-century vice president, they had come to regard that office as little more than a "fifth wheel to the executive coach." The nomination was in their view simply a device for balancing the ticket, either by ideology or by region. "Gus" Hobart, an easterner chosen to run with a middle westerner, William McKinley of Ohio, completely shared McKinley's conservative political philosophy. With warm feelings for Hobart, President McKinley decided to rescue the vice-presidency from its low estate. McKinley so embraced the vice president as his friend, associate, and confidant that Hobart's home on Lafayette Square became known as the "Little Cream White House," and Hobart as the "Assistant President." The success of Mr. Hobart in politics is largely due to a geniality and bonhommie of nature rarely met with, and to a large-heartedness and generosity, which gave him a personal following perhaps equalled by no public man in the State. Mr. Hobarts capacity for business had led others to seek his aid in the organization and development of perhaps more corporate and private enterprises than any other citizen of New Jersey, and with many of these he was connected, either as counsel, director or in some other capacity more or less responsible and active. He was president of The Passaic Water Company, supplying the city of Paterson; The Acquackanonk Water Co.,supplying the city of Passaic; The Morris County Railroad, and The Patterson Electric Railway; a director of The Dundee Water Power & Land Co, The New York, Susquehanna & Western Railroad, and The Lehigh & Hudson River Railroad, The First National Bank of Paterson, The Paterson Savings Institution, The Liberty National Bank of the city of New York, The Barbour Flax Spinning Co., The Barbour Bros Co., The Pioneer Silk Co., The Peoples Gas Light Co., The Passaic Gas Light Co., The Patterson Electric Light Co., The American Cotton Oil Co. of the city of New York, and The Citizens Insurance Co. of the same city. The Long Branch Water Co. and The Highland Water Co.; counsel for the East Jersey Water Co., The West Milford Water Storage Co., The Montclair Water Co., and other allied interests; treasurer of The Cedar Lawn Cemetery Co. of Paterson, and of several land companies; and was president or director in a least a score of other corporations, doing business in New Jersey and elsewhere. Some of Mr. Hobarts most notable achievements have been the discharge of the trusts of receiver of The New Jersey Midland Railroad, The Montclair Railroad, The Jersey City & Albany Railroad, and The First National Bank of Newark, in 1880. The last named important work was done with an energy and ability, which drew from the Comptroller of the Currency the warmest expressions of approval, the complicated business being wound up and the depositors paid in full inside of six months.