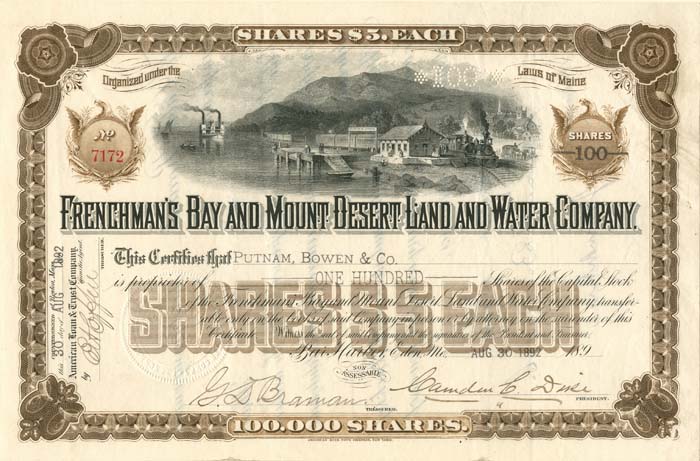 Frenchman Bay in Maine, part of "Down East" Hancock County, is the large body of ocean between the northeastern shoreline of Mount Desert Island and the southern coast of Maine extending along the western shoreline of Schoodic Peninsula. It was named in honor of the famous French Explorer Samuel de Champlain who first sailed in and charted this area for France in early September of 1604. There are many islands in the bay area including Bar Island, Bald Porcupine, Sheep Porcupine, and Long Porcupine Islands.

Even though the largest (by population) and most well known town bordering Frenchman Bay is Bar Harbor on Mount Desert Island, it is the municipality of Gouldsboro in which most of these islands are, including even Bar Island which is within walking distance of Bar Harbor at low tide when a natural land bridge appears. (From acadiamagic.com)

Mount Desert is a town on Mount Desert Island in Hancock County, Maine, United States. The population was 2,053 at the 2010 census. Incorporated in 1789, the town currently encompasses the villages of Otter Creek, Seal Harbor, Northeast Harbor, Somesville, Hall Quarry, and Pretty Marsh.

Item ordered may not be exact piece shown. All original and authentic.
OUT OF STOCK
Request re-stock notice?
Email this to a friend
Request Info
Previous Item (Bronxmont Realty Syndicate)    (State of Kansas First Mortgage Real Estate Bond) Next Item