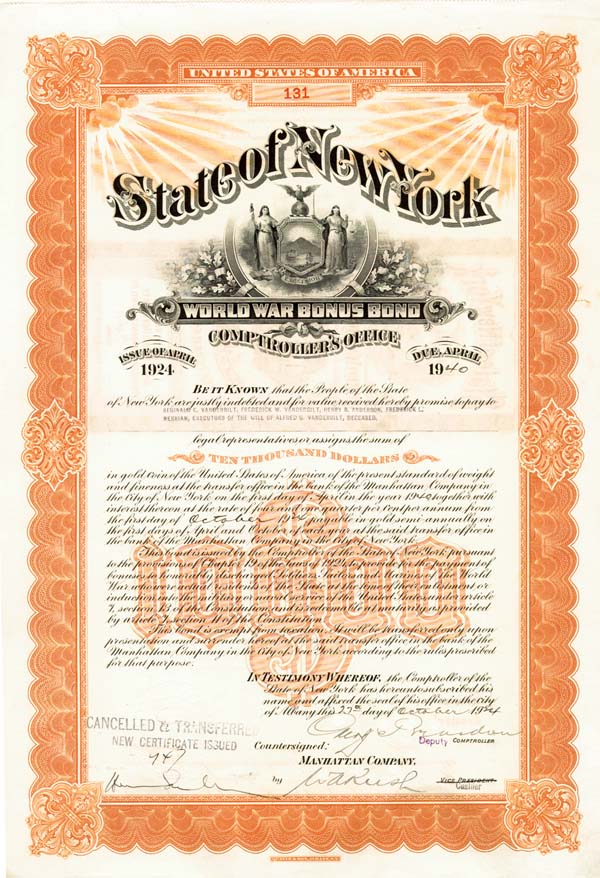 Frederick W. Vanderbilt (1856-1938), Capitalist, Son of Wm. H. Vanderbilt. Obtained business training in offices of his fathers railroad system. Owned a great Steam Yacht The Warrior. Exceptional estate at Hyde Park on the Hudson. Director of many railroads and other corporations. Along with his brothers Cornelius and William K, he kept the New York Central System strong. This Historic $10,000 bond is made out to Reginald C. Vanderbilt, Frederick W. Vanderbilt, Henry B. Anderson, Frederick L. Merriam, Executors of the will of Alfred G. Vanderbilt, Deceased. Interesting to note that Alfred G. died in the Sinking of the Lusitania. Frederick W. signs the transfer document along with others as Executors of the will. His signature is bold and uncanceled. This 1920s bond is dealing with the funds to be used for a World War I New York State Bonus for Veterans. Excellent Condition.

Item ordered may not be exact piece shown. All original and authentic.
Email this to a friend
Request Info
Previous Item (Frederick W Vanderbilt)    (Gallatin Brothers - Mohawk and Hudson Railroad) Next Item