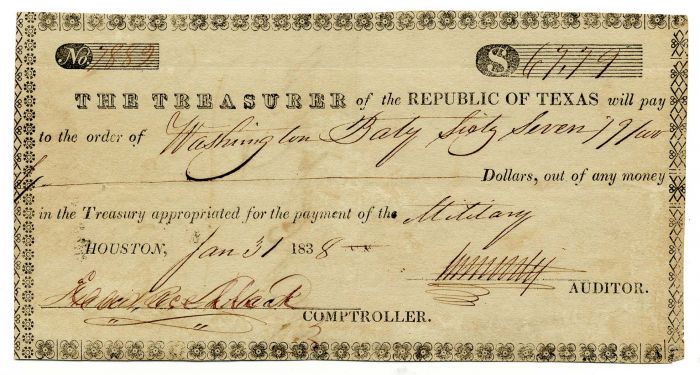 Francis Richard Lubbock (October 16, 1815  June 22, 1905) was the ninth Governor of Texas and was in office during the American Civil War. He was the brother of Thomas Saltus Lubbock, for whom Lubbock County, Texas, and the eponymous county seat are named.

Lubbock was a businessman in South Carolina before moving to Texas in 1836. During the Republic of Texas period, President Sam Houston appointed Lubbock to be comptroller.

In 1857, Lubbock was elected lieutenant governor of Texas as a Democrat, but failed in his re-election bid in 1859. Following the Confederate secession in 1861, Lubbock won the governorship of Texas. During his tenure, he supported Confederate conscription, working to draft all able-bodied men, including resident aliens, into the Confederate States Army. He was known to praise the Great Hanging at Gainesville, where in October 1862, some 42 suspected Unionists were murdered, convicted and killed by hanging through sentences by a "Citizens Court" organized by Texas state troops, but not recognized under state law, with some 14 lynched without benefit even of a show trial. It was part of an outbreak of violence, often caused by Confederate or state troops, in North Texas in the early years of the war.

When Lubbock's term ended in 1863, he joined the Confederate Army. He was commissioned as a lieutenant colonel, serving under Major General John B. Magruder. By 1864, Lubbock was promoted to aide-de-camp for Jefferson Davis. Following the Confederacy's military collapse, Lubbock fled from Richmond, Virginia, with Davis. They were soon caught by Union troops in Georgia. He was imprisoned at Fort Delaware with John Reagan and Jefferson Davis for eight months before being paroled.

On his return to Texas, Lubbock continued to pursue business interests in Houston and Galveston. From 1878 to 1891, he served as Texas State Treasurer.