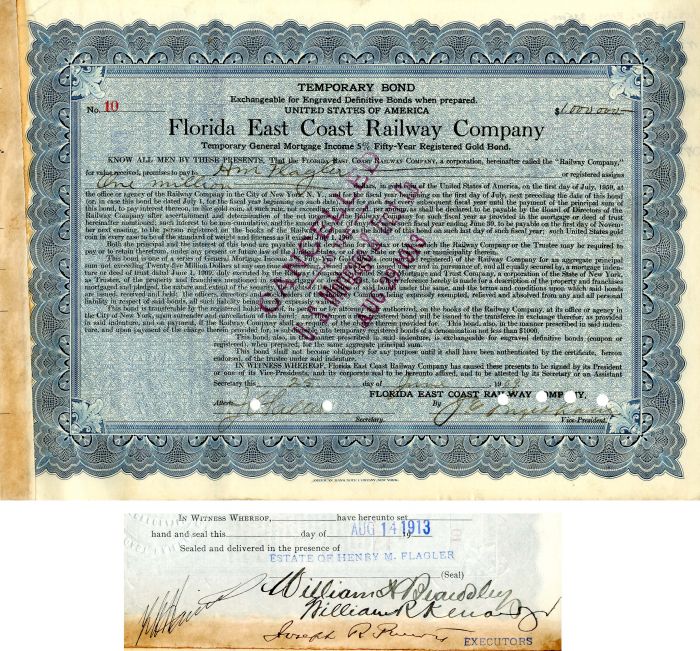 Temporary Bond issued to HM Flagler and signed on back by Wm. H. Beardsley, private secretary to Rockefeller.

Henry Morrison Flagler (1830-1913)  Through the grain and distillery business, he met John D. Rockefeller, in Bellevue, Ohio. After a business disaster as a salt manufacturer in Saginaw, Michigan, he moved to Cleveland and soon joined Rockefeller and chemist and inventor Samuel Andrews in forming Rockefeller, Andrews & Flagler in 1867, which they were soon to develop into Standard Oil. By 1872, it led the American oil refining industry, producing 10,000 barrels per day.

William H. Beardsley was born in 1850. He was the son of Henry Beardsley and Laura O'Connor. He passed away in 1925. One of the enterprising and well known native sons of Butler county Ohio is William H Beardsley, who by a career characterized by a spirit of enterprise and progress, has well earned representation in this work. William H Beardsley was educated in the public schools of Hamilton, which was supplemented by attendance at the Miami University, at Oxford. Upon completion of his studies, he entered the employ of the Niles Tool Works at Hamilton, but subsequently engaged in the publishing business, with the late J. H. Long, on North Second Street. Disposing of his interest in the printing business, he engaged in the school furniture and real slate blackboard business, in which he was quite successful. In I888, George Beardsley, a civil engineer, removed from Hamilton to Phoenix, Arizona and was there called upon to investigate the practicability of irrigating sixty thousand acres of arid land in the Maricopa county, that territory. The survey demonstrating the feasibility of the undertaking. In 1891, the subject of this sketch formed the Agua Pria Construction Company, to carry on the projected work of irrigation. It is a mammoth undertaking, but the work is progressing satisfactorily and, when completed, it will render all of this vast tract of now arid land marketable, and a monument to Mr. Beardsley's energy and ability. On December 11, I888, Mr. Beardsley was united in marriage with Mrs. Ida R. (Oglesby) Forney, daughter of the late William B. Oglesby, formerly treasurer of Butler County, and to this union has been born one son, Robert Oglesby, now aged fourteen years. Socially, Mr. Beardsley is a member of the Benevolent and Protective Order of Elks, at Middletown, and takes a deep interest in the welfare of the order. As a business man, he has exhibited abilities of the highest order, and a disposition and temperament that enable him to push to completion any project which he undertakes. He is held in the highest esteem by all his acquaintances because of his many estimable traits of character.