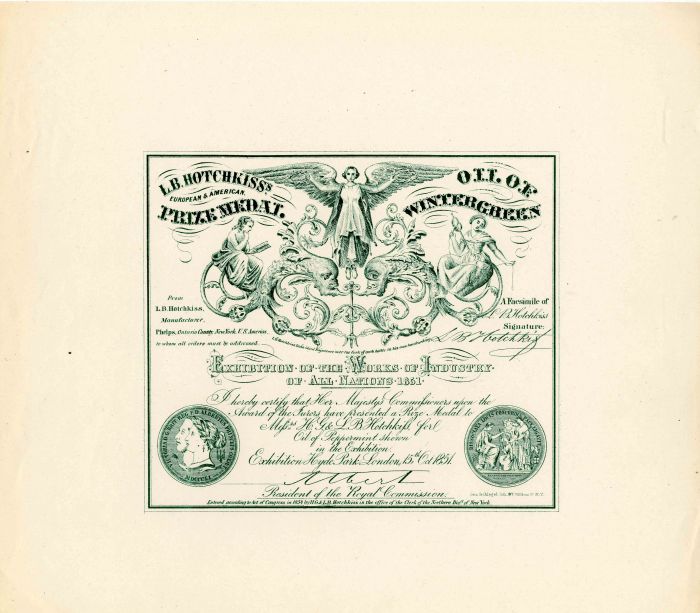 Award to L.B. Hotchkiss for Oil of Peppermint shown at the Crystal Palace Exhibition at the World's Fair in London, England.

The Great Exhibition of the Works of Industry of All Nations or The Great Exhibition (sometimes referred to as the Crystal Palace Exhibition in reference to the temporary structure in which it was held), an international exhibition, took place in Hyde Park, London, from 1 May to 15 October 1851. It was the first in a series of World's Fairs, exhibitions of culture and industry that became popular in the 19th century. The Great Exhibition was organised by Henry Cole and by Prince Albert, husband of the reigning monarch of the United Kingdom, Queen Victoria. Famous people of the time attended, including Charles Darwin, Karl Marx, Samuel Colt, members of the Orléanist Royal Family and the writers Charlotte Brontë, Charles Dickens, Lewis Carroll, George Eliot, Alfred Tennyson and William Makepeace Thackeray.

The Exposition des produits de l'industrie française (Exhibition of Products of French Industry) organised in Paris, France, from 1798 to 1849 were precursors to the Great Exhibition of 1851 in London.

The Great Exhibition of the Works of Industry of All Nations was organised by Prince Albert, Henry Cole, Francis Henry, George Wallis, Charles Dilke and other members of the Royal Society for the Encouragement of Arts, Manufactures and Commerce as a celebration of modern industrial technology and design. It was arguably a response to the highly effective French Industrial Exposition of 1844: indeed, its prime motive was for Britain to make "clear to the world its role as industrial leader". Prince Albert, Queen Victoria's consort, was an enthusiastic promoter of the self-financing exhibition; the government was persuaded to form the Royal Commission for the Exhibition of 1851 to establish the viability of hosting such an exhibition. Queen Victoria and her family visited three times. Although the Great Exhibition was a platform on which countries from around the world could display their achievements, Britain sought to prove its own superiority. The British exhibits at the Great Exhibition "held the lead in almost every field where strength, durability, utility and quality were concerned, whether in iron and steel, machinery or textiles." Britain also sought to provide the world with the hope of a better future. Europe had just struggled through "two difficult decades of political and social upheaval," and now Britain hoped to show that technology, particularly its own, was the key to a better future.

Sophie Forgan says of the Exhibition that "Large, piled-up 'trophy' exhibits in the central avenue revealed the organisers' priorities; they generally put art or colonial raw materials in the most prestigious place. Technology and moving machinery were popular, especially working exhibits." She also notes that visitors "could watch the entire process of cotton production from spinning to finished cloth. Scientific instruments were found in class X, and included electric telegraphs, microscopes, air pumps and barometers, as well as musical, horological and surgical instruments."

A special building, nicknamed The Crystal Palace, or "The Great Shalimar", was built to house the show. It was designed by Joseph Paxton with support from structural engineer Charles Fox, the committee overseeing its construction including Isambard Kingdom Brunel, and went from its organisation to the grand opening in just nine months. The building was architecturally adventurous, drawing on Paxton's experience designing greenhouses for the sixth Duke of Devonshire. It took the form of a massive glass house, 1848 feet long by 454 feet wide (about 563 metres by 138 metres) and was constructed from cast iron-frame components and glass made almost exclusively in Birmingham and Smethwick. From the interior, the building's large size was emphasized with trees and statues; this served, not only to add beauty to the spectacle, but also to demonstrate man's triumph over nature. The Crystal Palace was an enormous success, considered an architectural marvel, but also an engineering triumph that showed the importance of the Exhibition itself. The building was later moved and re-erected in 1854 in enlarged form at Sydenham Hill in south London, an area that was renamed Crystal Palace. It was destroyed by fire on 30 November 1936.

Six million peopleequivalent to a third of the entire population of Britain at the timevisited the Great Exhibition. The average daily attendance was 42,831 with a peak attendance of 109,915 on 7 October. The event made a surplus of £186,000 (£18,370,000 in 2015), which was used to found the Victoria and Albert Museum, the Science Museum and the Natural History Museum. They were all built in the area to the south of the exhibition, nicknamed Albertopolis, alongside the Imperial Institute. The remaining surplus was used to set up an educational trust to provide grants and scholarships for industrial research; it continues to do so today.

The Exhibition caused controversy as its opening approached. Some conservatives feared that the mass of visitors might become a revolutionary mob. The English-born King Ernest Augustus I of Hanover, shortly before his death, wrote to Lord Strangford about it:

The folly and absurdity of the Queen in allowing this trumpery must strike every sensible and well-thinking mind, and I am astonished the ministers themselves do not insist on her at least going to Osborne during the Exhibition, as no human being can possibly answer for what may occur on the occasion. The idea ... must shock every honest and well-meaning Englishman. But it seems everything is conspiring to lower us in the eyes of Europe.

In modern times, the Great Exhibition is a symbol of the Victorian Age, and its thick catalogue, illustrated with steel engravings, is a primary source for High Victorian design. A memorial to the exhibition, crowned with a statue of Prince Albert, is located behind the Royal Albert Hall. It is inscribed with statistics from the exhibition, including the number of visitors and exhibitors (British and foreign), and the profit made.

The official descriptive and illustrated catalogue of the event lists exhibitors not only from throughout Britain but also from its 'Colonies and Dependencies' and 44 'Foreign States' in Europe and the Americas. Numbering 13,000 in total, the exhibits included a Jacquard loom, an envelope machine, kitchen appliances, steel-making displays and a reaping machine that was sent from the United States.

Admission prices to the Crystal Palace varied according to the date of visit, with ticket prices decreasing as the parliamentary season drew to an end and London traditionally emptied of wealthy individuals. Prices varied from three guineas (£300 in 2015) (two guineas for a woman) for a season ticket, or £1 per day (for the first two days only), then reducing to five shillings per day (until May 22). The admission price was then further reduced to one shilling (£5 in 2015), per day  except on Fridays, when it was set at two shillings and six pence and on Saturdays when it remained at five shillings. The one-shilling ticket proved most successful amongst the industrial classes, with four and a half million shillings (£22,000,000 in 2015) being taken from attendees in this manner. Two thousand five hundred tickets were printed for the opening day, all of which were bought.

To attract future custom from the working classes, the newly expanding railways offered highly discounted tickets for people to travel from distant parts of the country and special rates were offered to parties, often led by the local vicar. Those too poor to travel lined up by the rail tracks to watch the long trains of open carriages steaming past.

The Great Exhibition of 1851 encouraged the production of souvenirs. Several manufacturers produced stereoscope cards which provided a three-dimensional view of the Exhibition. These paper souvenirs were printed lithographic cards which were hand-coloured and held together by cloth to give a three-dimensional view of the Great Exhibition. They offered a miniature view of the Crystal Palace Exhibition when one viewed the cards through the peep holes on the front cover. Visitors purchased these souvenirs so that they could relive the experience of going to the exhibition.

Condition: Excellent
Item ordered may not be exact piece shown. All original and authentic.
OUT OF STOCK
Request re-stock notice?
Email this to a friend
Request Info
Previous Item (Essex Agricultural Society of Massachusetts Certificate)    (Diploma from the Soule Commercial College and Literary Institute) Next Item