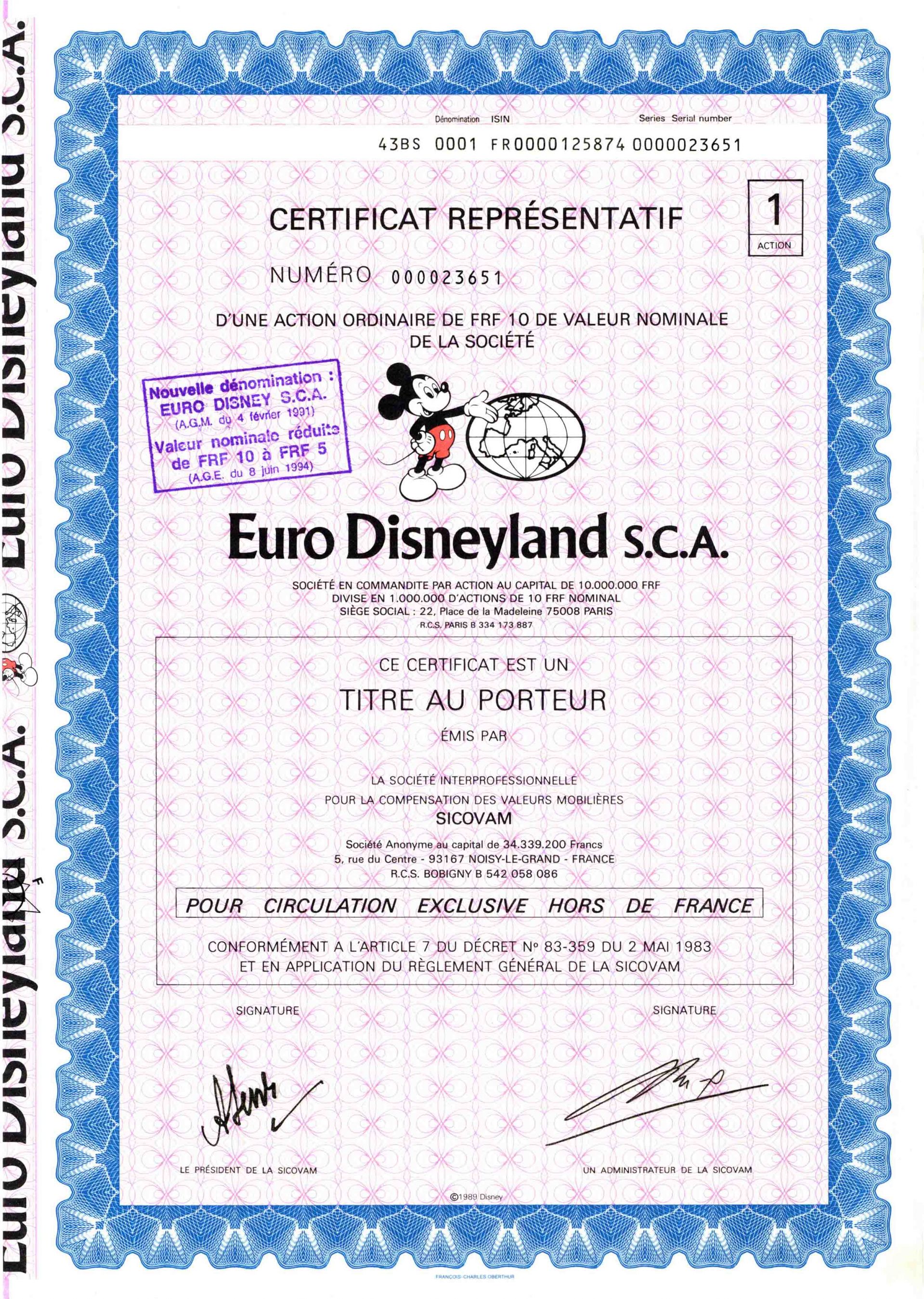 Stock with unusual colors of blue & pink. Vignette of 'Mickey Mouse and Globe', has a touch of red.

Disneyland Park, originally Euro Disneyland Park, is a theme park found at Disneyland Paris in Marne-la-Vallée, France. The park opened on 12 April 1992 as the first of the two parks built at the resort. Designed and built by Walt Disney Imagineering, its layout is similar to Disneyland Park in California and Magic Kingdom Park at Walt Disney World in Florida. Spanning 56.656 ha (140 acres)the second largest Disney park based on the original, after Shanghai Disneyland Parkit is dedicated to fairy tales and Disney characters.

In order to make things more distinct and not be a mere copy of the original, modifications were made to the park's concepts and designs. Among the changes was the change of Tomorrowland to Discoveryland, giving the area a retrofuturistic theme. Other altered elements include the Haunted Mansion, which was redesigned as Phantom Manor and a retro, more intense version of Space Mountain (now Hyperspace Mountain). The park's location brought forth its own challenges. Sleeping Beauty Castle (Le Château de la Belle au Bois Dormant) is said by its designers to have been necessarily reevaluated for a continent on which authentic castles stand. Modifications to the park were made to protect against changes in weather in the Parisian climate. Covered walkways referred to as "arcades" were added, and Michael Eisner ordered the installation of 35 fireplaces in hotels and restaurants.

Michael Eisner noted, "As Americans, the word 'Euro' is believed to mean glamorous or exciting. For Europeans it turned out to be a term they associated with business, currency, and commerce. Renaming the park 'Disneyland Paris' was a way of identifying it with one of the most romantic and exciting cities in the world."

On March 14, 2020, Disneyland Park, alongside the Walt Disney Studios Park, was temporarily closed due to the ongoing COVID-19 pandemic. Both parks remained closed for four months, resuming operations on July 15, 2020 with strict rules such as limited guest attendance, social distancing, and mandatory wearing of face masks. The park closed again on 29 October 2020 following a second nationwide lockdown. The park reopened in June 17th, 2021.

Disneyland Park is divided into five themed "lands", which house 49 attractions. Designed like a wheel with the hub on Central Plaza before Sleeping Beauty Castle, pathways spoke out across the 140 acres (57 ha) of the park and lead to the lands. The 3 ft (914 mm) narrow gauge Disneyland Railroad runs along the perimeter of the park and stops in Main Street, U.S.A., Frontierland, Fantasyland and Discoveryland.