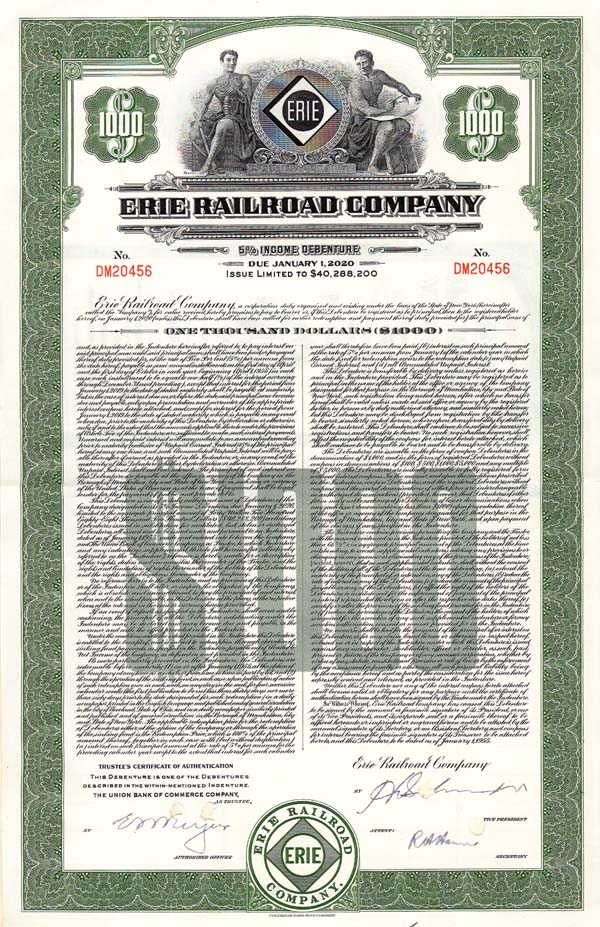 The Erie Railroad (reporting mark ERIE) was a railroad that operated in the northeastern United States, originally connecting New York City  more specifically Jersey City, New Jersey, where Erie's former terminal, long demolished, used to stand  with Lake Erie. It expanded west to Chicago with its 1941 merger with the former Atlantic and Great Western Railroad, also known as the New York, Pennsylvania and Ohio Railroad (NYPANO RR). Its mainline route proved influential in the development and economic growth of the Southern Tier of New York State, including cities such as Binghamton, Elmira, and Hornell. The Erie Railroad repair shops were located in Hornell and was Hornell's largest employer. Hornell was also where Erie's mainline split into two routes, one north to Buffalo and the other west to Cleveland.

On October 17, 1960, the Erie merged with former rival Delaware, Lackawanna & Western Railroad to form the Erie Lackawanna Railroad. The Hornell repair shops were closed when Conrail took over, and repair operations moved to the Lackawanna's Scranton facility; this had a devastating effect on Hornell from which it has never recovered. (The repair shops have subsequently been used, intermittently, for the assembly of railroad and transit cars.) It is now run by Alstom. Much of the former Erie line between Hornell and Binghamton was damaged in 1972 by the floods of Hurricane Agnes, but the damage was quickly repaired and this line is today a key link in the Norfolk Southern Railway's Southern Tier mainline. What was left of the Erie Lackawanna became part of Conrail in 1976. In 1983 Erie remnants became part of New Jersey Transit rail operations, including parts of its Main Line. Today most of the surviving Erie Railroad routes are operated by the Norfolk Southern Railway.

The New York and Erie Rail Road was chartered April 24, 1832, by Governor of New York, Enos T. Throop to connect the Hudson River at Piermont, north of New York City, west to Lake Erie at Dunkirk. On February 16, 1841, the railroad was authorized to cross into the northeast corner of Pennsylvania on the west side of the Delaware River. Construction began in 1836 and was opened in sections until reaching the full length to Dunkirk May 19, 1851. At Dunkirk steamboats continued across Lake Erie to Detroit, Michigan.

When the route was completed in May 1851, President Millard Fillmore and several members of his cabinet, including Secretary of State Daniel Webster, made a special, two-day excursion run to open the railway. It is reported that Webster viewed the entire run from a rocking chair attached to a flatcar, with a steamer rug and jug of high-quality Medford rum. At stops, he would get down and speechify.

The line was built as 6 ft (1,829 mm) wide gauge; this was believed to be a superior technology to standard gauge, providing more stability.

In 1848 the railroad built the Starrucca Viaduct, a stone railroad bridge over Starrucca Creek in Lanesboro, Pennsylvania, which has survived and is still in use today. The viaduct is 1,040 feet (317 m) long, 100 feet (30.5 m) high and 25 feet (7.6 m) wide at the top. It is the oldest stone rail bridge in Pennsylvania still in use.

In August 1859, the company went into receivership due to the large costs of building, and on June 25, 1861, it was reorganized as the Erie Railway. This was the first bankruptcy of a major trunk line in the U.S.

In the Erie War of the 1860s, four well-known financiers struggled for control of the company; Cornelius Vanderbilt versus Daniel Drew, James Fisk and Jay Gould. Gould ultimately triumphed in this struggle but was forced to relinquish control in 187273, due to unfavorable public opinion following his involvement in 1869 gold-rigging scandal and to his loss of $1 million of Erie Railroad stock to the British con-man Lord Gordon-Gordon.

In 1869, the railroad moved its main shops facilities from Dunkirk to Buffalo. Rather than demolishing the shops in Dunkirk, the facility was leased to Horatio G. Brooks, the former chief engineer of the NY&E who was at the controls of the first train into Dunkirk in 1851. Horatio Brooks used the facilities to begin Brooks Locomotive Works, which remained in independent business until 1901 when it was merged with seven other locomotive manufacturing firms to create ALCO. ALCO continued new locomotive production at this facility until 1934, then closed the plant completely in 1962.

The cost of breaking bulk cargo in order to interchange with standard gauge lines led the Erie to introduce a line of cars designed to operate on either broad or standard gauge trucks. Starting in 1871, this allowed interchange traffic by means of truck exchange, including through passenger and freight connections to Saint Louis, Missouri using a Nutter car hoist in Urbana, Ohio.

Beginning in 1876, the Erie began plans to convert their line to standard gauge, as it became clear that the cost of changing from one gauge to another was not justified by the stability brought by the wider gauge. By the time of its reorganization in 1878, the Erie had built a third rail along the entire mainline from Buffalo to Jersey City. This project all but brought the railroad to bankruptcy.

The Erie still did not see profits and via bankruptcy was sold in 1878 to become the New York, Lake Erie and Western Railroad.

In 1886, it was reported that the Erie and the Reading Railroad shared ferry services between their two Jersey City terminals, the larger being Pavonia Terminal, and Fulton Ferry in Brooklyn, New York for 11 round trips on weekdays and Saturdays, and four round trips on Sunday. In 1889, it opened a new bridge across the Hackensack River improving service to its terminals.

By 1893, the New York, Lake Erie and Western Railroad went into bankruptcy reorganization again and emerged in 1895 as the Erie Railroad.

George W. Perkins brought Frederick D. Underwood into the Erie Railroad in 1910. During the eastern railroad strike of 1913 Underwood agreed to accept any ruling made by mediators under the Newlands Reclamation Act. One of the demands made by Erie employees was a 20% increase in wages. Erie management had refused a wage increase but compromised by asking employees to wait until January 1915 for any advance. Union leaders agreed to make this an issue which Erie management would settle with its own men. However, W.G. Lee, president of the brotherhood of railroad trainmen, asserted that the only way "to deal with the Erie is through J.P. Morgan & Company, or the banks". Underwood responded from his home in Wauwatosa, Wisconsin, saying "I am running the Erie Railroad: not George W. Perkins, nor J.P. Morgan & Co., nor anybody else."

In mid-1920s the successful Van Sweringen brothers gained control of the Erie, improving operations (such as standardizing the railroad's locomotives and rolling stock) and bottom-line earnings. Unfortunately, both brotherswho at the time owned several other railroadsdied at an early age but had they lived the shape of railroads in the east would likely look very different today.

Despite the ravages of the Great Depression, the Erie managed to hold its own until it entered bankruptcy on January 18, 1938. Its reorganization, accomplished by December 1941, included the purchase of the leased Cleveland and Mahoning Valley Railroad, swapping high rent for lower interest payments, and the purchase of formerly subsidized and leased lines. The reorganization paid off, as the Erie managed to pay dividends to its shareholders after the dust had settled.

In 1938, the Erie Railroad was involved in the famous U.S. Supreme Court case of Erie Railroad Co. v. Tompkins. The Erie doctrine, which governs the application of state common law in federal courts, is still taught in American law schools today.

On September 15, 1948, the Cleveland Union Terminal Company allowed the Erie to use the Union Terminal adjacent to Terminal Tower in lieu of its old station. Also that year the Erie purchased a share of the Niagara Junction Railway, along with the New York Central and the Lehigh Valley.

Steam last operated on the Erie on March 17, 1954, when the fires were dropped on K-1 class Pacific locomotive No. 2530, used on a commuter run between Jersey City and Spring Valley, New York.

The Erie prospered throughout the mid-1950s, but then began an irreversible decline. The company's 1957 income was half of that in 1956; by 1958 and 1959, the Erie posted deficits. The business recession that occurred in the 1950s led the Erie to explore the idea of doing business with the nearby Delaware, Lackawanna and Western Railroad (DL&W). The first result of this was the abandonment of duplicate freight facilities in Binghamton and Elmira, New York. Between 1956 and 1957, the Erie shifted its passenger trains from its Pavonia Terminal to the DL&W's newer Hoboken Terminal. Also, the DL&W's mainline between Binghamton and Elmira was abandoned in favor of the Erie's parallel mainline in 1958. These successful business consolidations led to merger talks (which, at first, also included the Delaware and Hudson Railroad); on October 17, 1960, the two railroads merged to create the Erie Lackawanna Railroad. Erie's large repair facility in Hornell were closed when Conrail took over in 1976 and operations were consolidated at the Lackawanna's Scranton facility. However, the merged railroad only survived for a decade and a half before continued decline forced it to join Conrail in 1976.

The former Erie tracks between Hornell and Binghamton were destroyed in 1972 by Hurricane Agnes.

Item ordered may not be exact piece shown. All original and authentic.
Email this to a friend
Request Info
Previous Item (Boston Terminal - Bond)    (Lake Shore and Michigan Southern Railway - Bond) Next Item