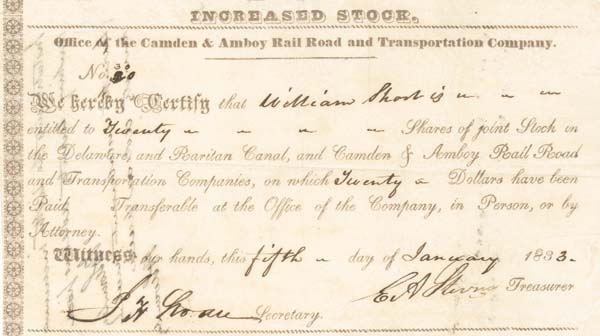 Edwin Augustus Stevens (1795-1868), Financier. Son of John Stevens whose business affairs he managed in great part; brother of Robert L. Stevens. Organized the Camden & Amboy Railroad in 1830 and managed it with great success until his death. Experimented with construction of an armored or iron-clad warship (1814), which came to fruition in his vessel named the Stevens Battery (1854). 1833 Camden & Amboy RR stock has a nice signature of Stevens. Excellent Condition. Quite Rare!

Item ordered may not be exact piece shown. All original and authentic.
Email this to a friend
Request Info
Previous Item (Edward Hardy Clark - Homestake Mining Co - Stock Certificate)    (Elimination of Railroad Grade Crossings Issued to the Will of Alfred G. Vanderbilt - $5,000 - Bond) Next Item