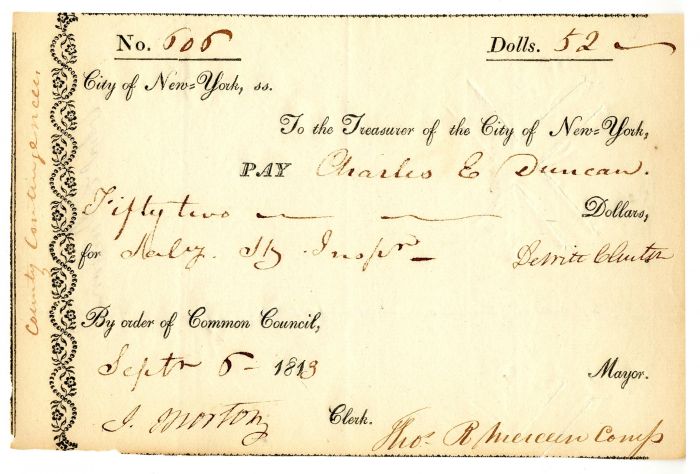 Pay Order issued to and signed by Dewitt Clinton.

DeWitt Clinton (March 2, 1769  February 11, 1828), whose name was almost always spelled De Witt during his lifetime and until the late 20th century, was an American politician and naturalist. He served as a United States Senator, Mayor of New York City, and as the sixth Governor of New York. In this last capacity, he was largely responsible for the construction of the Erie Canal.[1][2] Clinton was a major candidate for the American presidency in the election of 1812, challenging incumbent James Madison.

A nephew of long-time New York Governor George Clinton, DeWitt Clinton served as his uncle's secretary before launching his own political career. As a Democratic-Republican, Clinton won election to the New York State Legislature in 1798 before briefly serving as a U.S. Senator. Returning to New York, Clinton served three terms as appointed Mayor of New York City and Lieutenant Governor of New York. In the 1812 presidential election, Clinton won support from the Federalists as well as a group of Democratic-Republicans dissatisfied with Madison. Though Madison won re-election, Clinton carried most of the Northeastern United States and fared significantly better than the previous two Federalist-supported candidates. After the presidential election, Clinton continued to affiliate with the Democratic-Republican Party.

Clinton was Governor of New York from 1817 to 1822 and from 1825 to 1828, presiding over the construction of the Erie Canal. Clinton believed that infrastructure improvements could transform American life, drive economic growth, and encourage political participation. He heavily influenced the development of New York State and the United States.