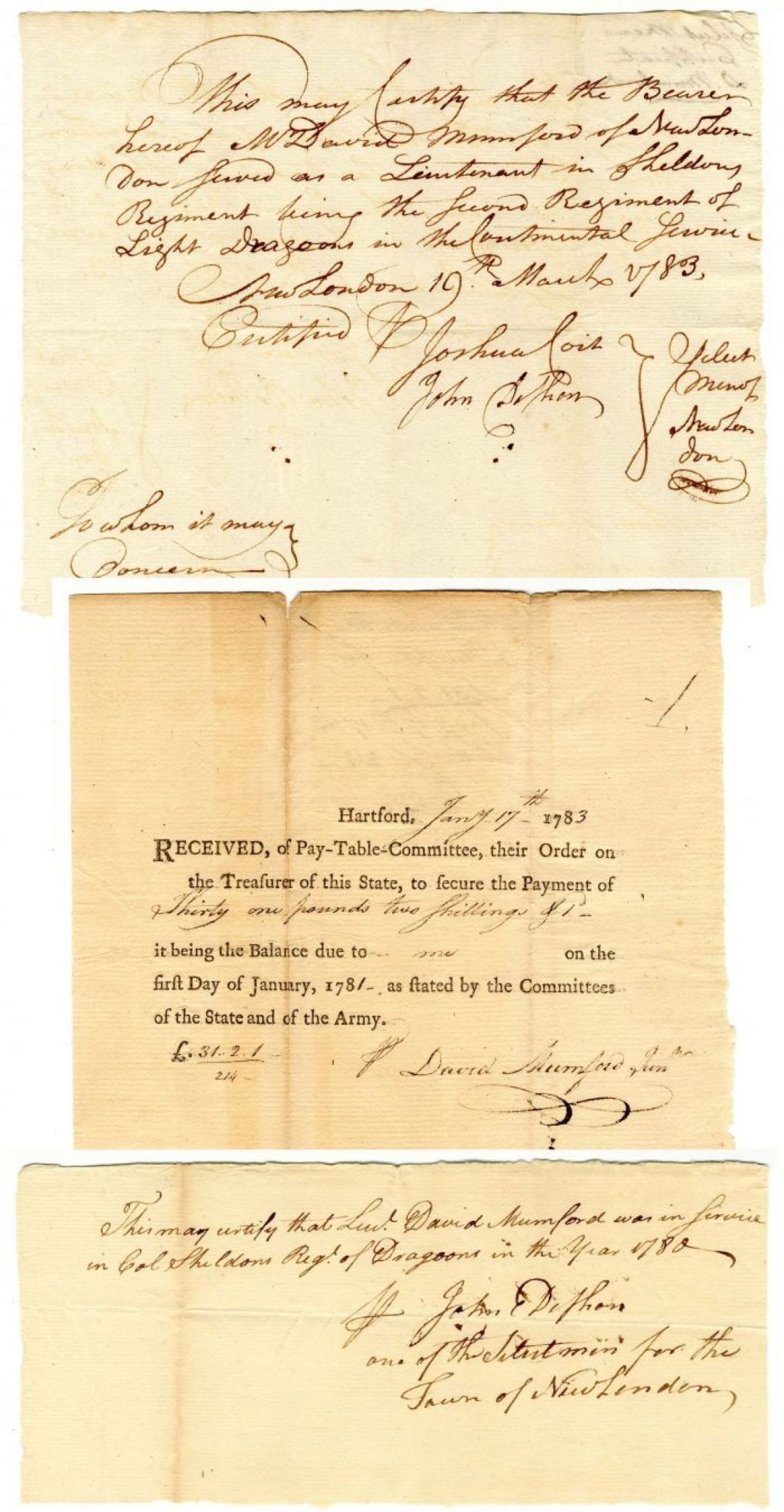 3 Documents related to and 1 signed by David Mumford, Lieutenant in the Regiment of Dragoons.

Dragoons were originally a class of mounted infantry, who used horses for mobility, but dismounted to fight on foot. From the early 17th century onward, dragoons were increasingly also employed as conventional cavalry and trained for combat with swords and firearms from horseback. While their use goes back to the late 16th century, dragoon regiments were established in most European armies during the 17th and early 18th centuries; they provided greater mobility than regular infantry but were far less expensive than cavalry.

The name reputedly derives from a type of firearm, called a dragon, which was a handgun version of a blunderbuss, carried by dragoons of the French Army.

The title has been retained in modern times by a number of armoured or ceremonial mounted regiments.

The establishment of dragoons evolved from the practice of sometimes transporting infantry by horse when speed of movement was needed. In 1552, Alexander Farnese, Duke of Parma mounted several companies of infantry on pack horses to achieve surprise, another example being that used by Louis of Nassau in 1572 during operations near Mons in Hainaut, when 500 infantry were transported this way. It is also suggested the first dragoons were raised by the Marshal de Brissac in 1600. According to old German literature, dragoons were invented by Count Ernst von Mansfeld, one of the greatest German military commanders, in the early 1620s. There are other instances of mounted infantry predating this. However Mansfeld, who had learned his profession in Hungary and the Netherlands, often used horses to make his foot troops more mobile, creating what was called an "armée volante" (French for flying army).

During the Spanish Conquest of Peru in the 16th century, conquistadors fought on horse with arquebuses, prefiguring the origin of European dragoons.

The name possibly derives from an early weapon, a short wheellock, called a dragon because its muzzle was decorated with a dragon's head. The practice comes from a time when all gunpowder weapons had distinctive names, including the culverin, serpentine, falcon, falconet, etc. It is also sometimes claimed a galloping infantryman with his loose coat and the burning match resembled a dragon.

It has also been suggested that the name derives from the German "tragen" or the Dutch "dragen", both being the verb "to carry" in their respective languages. Howard Reid claims the name and role descend from the Latin Draconarius.

Dragoon is occasionally used as a verb to mean to subjugate or persecute by the imposition of troops; and by extension to compel by any violent measures or threats. The term dates from 1689, at a time when dragoons were being used by the French monarchy to persecute Protestants, particularly by forcing Protestants to lodge a dragoon in their house to watch over them, at the householder's expense.

Early dragoons were not organized in squadrons or troops as were cavalry, but in companies like the infantry. Their commissioned and non-commissioned officers bore infantry ranks, while they used drummers, not buglers, to communicate orders on the battlefield. The flexibility of mounted infantry made dragoons a useful arm, especially when employed for what would now be termed "internal security" against smugglers or civil unrest, and on line of communication security duties.

In Britain, companies of dragoons were first raised during the Wars of the Three Kingdoms and prior to 1645 served either as independent troops or were attached to cavalry units. When the New Model Army was first approved by Parliament in January 1645, it included ten regiments of cavalry, each with a company of dragoons attached. At the urging of Sir Thomas Fairfax, on 1 March they were formed into a separate unit of 1,000 men, commanded by Colonel John Okey, and played an important part at the Battle of Naseby in June.

Supplied with inferior horses and more basic equipment, the dragoon regiments were cheaper to raise and maintain than the expensive regiments of cavalry. When in the 17th century Gustav II Adolf introduced dragoons into the Swedish Army, he provided them with a sabre, an axe and a matchlock musket, using them as "labourers on horseback". Many of the European armies henceforth imitated this all-purpose set of weaponry. Dragoons of the late 17th and early 18th centuries retained strong links with infantry in appearance and equipment, differing mainly in the substitution of riding boots for shoes and the adoption of caps instead of broad-brimmed hats to enable muskets to be worn slung.

A non-military use of dragoons was the 1681 Dragonnades, a policy instituted by Louis XIV to intimidate Huguenot families into either leaving France or re-converting to Catholicism by billeting ill-disciplined dragoons in Protestant households. While other categories of infantry and cavalry were also used, the mobility, flexibility and available numbers of the dragoon regiments made them particularly suitable for repressive work of this nature over a wide area.

In the Spanish Army, Pedro de la Puente organized a body of dragoons in Innsbruck in 1635. In 1640, a tercio of a thousand dragoons armed with the arquebus was created in Spain. By the end of the 17th century, the Spanish Army had three tercios of dragoons in Spain, plus three in the Netherlands and three more in Milan. In 1704, the Spanish dragoons were reorganised into regiments by Philip V, as were the rest of the tercios.

Dragoons were at a disadvantage when engaged against true cavalry, and constantly sought to improve their horsemanship, armament and social status. By the Seven Years' War in 1756, their primary role in most European armies had progressed from that of mounted infantry to that of heavy cavalry. They were sometimes described as 'medium' cavalry, midway between heavy/armoured and light/unarmoured regiments, though this was a classification that was rarely used at the time. Their original responsibilities for scouting and picket duty had passed to hussars and similar light cavalry corps in the French, Austrian, Prussian, and other armies. In the Imperial Russian Army, due to the availability of the Cossack troops, the dragoons were retained in their original role for much longer.

An exception to the rule was the British Army, which from 1746 onward gradually redesignated all regiments of "Horse" (regular cavalry) as lower paid "Dragoons", in an economy measure. Starting in 1756, seven regiments of Light Dragoons were raised and trained in reconnaissance, skirmishing and other work requiring endurance in accordance with contemporary standards of light cavalry performance. The success of this new class of cavalry was such that another eight dragoon regiments were converted between 1768 and 1783. When this reorganisation was completed in 1788, the cavalry arm consisted of regular dragoons and seven units of Dragoon Guards. The designation of Dragoon Guards did not mean that these regiments (the former 2nd to 8th Horse) had become Household Troops, but simply that they had been given a more dignified title to compensate for the loss of pay and prestige.

Towards the end of 1776, George Washington realized the need for a mounted branch of the American military. In January 1777 four regiments of light dragoons were raised. Short term enlistments were abandoned and the dragoons joined for three years, or "the war". They participated in most of the major engagements of the American War of Independence, including the Battles of White Plains, Trenton, Princeton, Brandywine, Germantown, Saratoga, Cowpens, and Monmouth, as well as the Yorktown campaign.