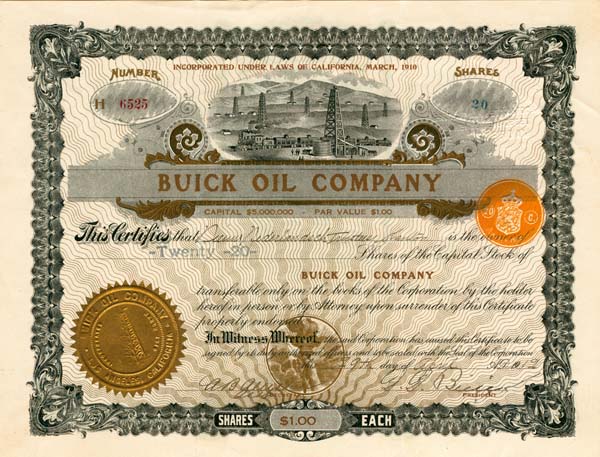 The Buick Oil Company was founded by the auto pioneer David Dunbar Buick (1854-1929) and was incorporated in Los Angeles, California in March, 1910. D. D. Buick signs this great stock as President. Rare and Excellent Condition. Outstanding!

David Dunbar Buick - 1854-1929
Inventor, Manufacturer, and Founder of the Buick Motor Car Company
A remarkable Scotsman was born in Arbroath, Scotland. He was a man who deserved fame and fortune, yet died in poverty and is virtually unknown in his native land. He was David Dunbar Buick, born September 17, 1854 at 26 Green Street, Arbroath. David Buick founded the company that grew into the General Motors Corporation of America. Over 17,000,000 cars bearing his name and crest have rolled off production lines, yet he was involved in making only 120 of them.

His father, Alexander Buick, a joiner, immigrated to America with his wife and son when he was two years old. As a young man, David Buick settled in Detroit, where he started manufacturing plumbing materials. He made a tiny fortune after he invented a process for heat-binding porcelain to wrought iron to make white bath tubs -- a much sought-after status symbol in those days.

Around the turn of the century, David became obsessed with cars and, in 1902; he organized Buick Manufacturing Company. He borrowed $5,000 from a friend, Ben Briscoe, who didn't doubt David Buick's ability as a craftsman but was wary of his business abilities.

When Briscoe heard that a firm at Flint, was thinking of starting car production, he persuaded Buick to team up with them. The firm was impressed with Buick's car. They borrowed $10,000 from a local bank to settle the Buick debts. The Buick plant was shifted lock, stock and starting crank to Flint. The firm completed 16 cars in 1903 and 34 in 1904, all experimental machines at $1,200 each.

At this point, William C. Durant came onto the scene. A brilliant businessman, he'd already made a fortune in the carriage industry. On November 1, 1904, Durant became general manager of the Buick Motor Co. with Buick president. Durant, who would later create General Motors, was a go-getter. Like Ford, he knew the industry's future lay in speeding up production and cutting assembly costs. But Buick was a craftsman who regarded each car as a unique invention. One of the two had to go. It was David Buick. In 1906, aged 52, he severed his last link with the firm and returned to Detroit with his wife and son.

The company went from strength to strength. In 1908, Durant acquired Oldsmobile and Cadillac to form General Motors. Chevrolet joined in 1918. Britain's Vauxhall was acquired in 1926, and Germany's Opel some years later. Buick vehicle production reached 100,000 cars a year in 1923. Today, the Buick production facility is a 300-acre complex employing over 20,000 people and produces over 350,000 cars annually.

On March 5, 1929, David Buick died of colon cancer, impoverished and forgotten, in Harper Hospital, Detroit. Only a few weeks earlier, at the age of 74, Buick was still working as an inspector at Detroit's trade school. His wife died some years later followed by his son Thomas in 1943. Ben Briscoe wrote sadly in 1921, that had David Buick been able to keep his shares in the firm, they would have been worth more than $10,000,000 at that time. Their value today would be almost incalculable.