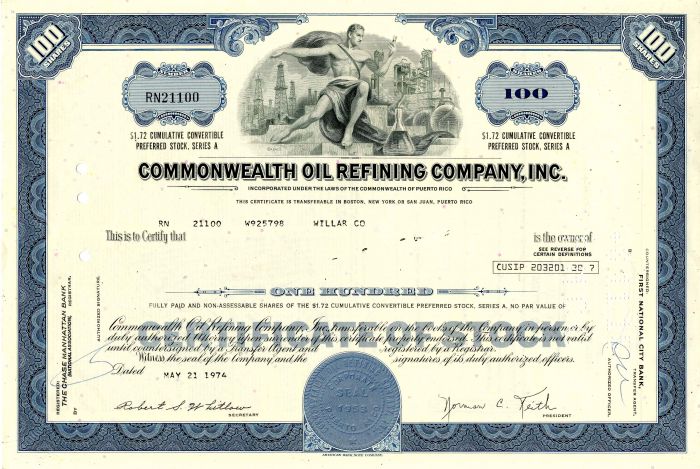 Commonwealth Oil Refining Company, Inc. (CORCO) was an oil refinery established in the towns of Peñuelas and Guayanilla in Puerto Rico in the second half of the 20th century. At one point, the company was ranked among the 500 largest in the United States by Fortune Magazine. In 1978, it supplied 80% of all petroleum products consumed in Puerto Rico and, at 2700 employees, it was Puerto Rico's largest employer. In addition, it was considered "among the largest independent petroleum refiners and petrochemical producers in the world."

The project started as part of Operation Bootstrap with the first unit being constructed in 1954. The company started operations in 1956. Hugo David Storer Tavarez was one of the men in charge of seeing that CORCO became a reality. The financing for CORCO was provided by First Boston Corporation.

The refinery is located in an 800-acre (3.2 km2) site. Its proximity to the Guayanilla bay made it ideal for the bulk import/export of chemicals it produced. By 1965 the company was a major producer of toluene, benzene, and xylene.

CORCO represented an investment of $25 million and had the capacity to refine 23,500 barrels (3,740 m3) of oil daily. The economic impact in the region was felt immediately, with lower unemployment rate being registered and higher standard of living. The refinery propelled related chemical industries to build in adjacent lands, and Phillips Puerto Rico, Peerless Petrochemicals, Caribbean Gulf Refining Co., and PPG Industries added large facilities next to CORCO, providing further employment in the region. Caribe Nitrogen, Union Carbide were also located there. The company created 8,000 direct jobs.

The refinery bought most of its oil from Venezuela and the 1970s Oil embargo shot up the price of crude oil imports to the United States, and thus Puerto Rico, and made it difficult for the company to be compete profitably against oil refineries in US, as the American refineries were able to soften the blow of higher crude prices by purchasing domestic (American) crude. This reality led to a gradual closing of operations starting in 1974. After operating under bankruptcy laws for several years, the ailing company finally shut down in March 1982, with "devastating" economic results for the region.

Today it functions as a terminal for the marine transportation and land-based storage of crude oil and petroleum products. After the refinery ceased operations, an entity called Desarrollo Integral del Sur (South Integral Development) began developing a long-term plan for the reuse of the lands and properties in the area.