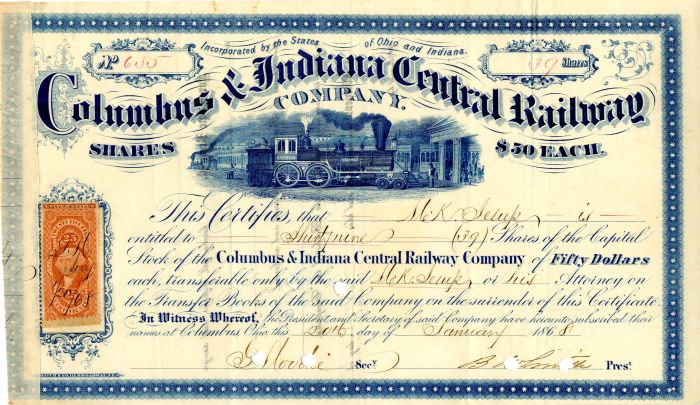 Stock issued to but not signed by M.K. Jesup.

Morris Ketchum Jesup (1830-1908) Morris Ketchum Jesup was a United States banker and philanthropist. He was the president of the American Museum of Natural History. He was born at Westport, Connecticut. In 1842 he went to New York City, where after some experience in business, he established a banking house in 1852. In 1856 he organized the banking firm of MK Jesup & Company, which after two reorganizations became Cuyler, Morgan & Jesup. He became widely known as a financier, retiring from active business in 1884. Before his retirement, he was already active in a wide variety of philanthropic endeavors. Jesup was one of the organizers of the United States Christian Commission during the Civil War, which helped provide care for wounded soldiers. He was one of the founders of the Young Men's Christian Association, and served as its president in New York in 1872. After 1860 he helped found and served as president of the Five Points House of Industry in New York, a type of settlement house in Lower Manhattan to teach new European immigrants the skills needed in the United States. After 1881 he was president of the New York City Mission Society and donated the funds for construction of the mission's DeWitt Memorial Church in Rivington Street on the Lower East Side, a center of immigrant settlement. Jesup contributed funds and worked personally to better social conditions in New York, in a period when the city was struggling to aid many poor immigrants from rural areas of southern and eastern Europe, including the Russian Empire. He was best known as a patron of scientific research: Jesup was a major contributor to fund the Arctic expeditions of Commander Robert E Peary. He was elected president of the Peary Arctic Club in 1899. Jesup also funded the Jesup North Pacific Expedition (1897-1902), a major ethnographic project led by the anthropologist Franz Boas. Jesup contributed to educational institutions. His contributions to Tuskegee Institute enabled George Washington Carver to develop a mobile educational station that he took to farmers. Jesup was treasurer of the Slater Fund at its beginning. He served as a member of the Peabody Educational Board and of the General Education Board. He was appointed president of the American Museum of Natural History, in New York City, to which he gave large sums in his lifetime and bequeathed $1,000,000. In 1915 the Metropolitan Museum, New York, received by bequest of Mrs. Jesup, a large and valuable collection of paintings. Jesup was president of the New York Chamber of Commerce from 1899 until 1907, and was the largest subscriber to its new building. To his native town he donated funds to construct the Westport Public Library. He died in New York City on 22 January 1908, aged 77.