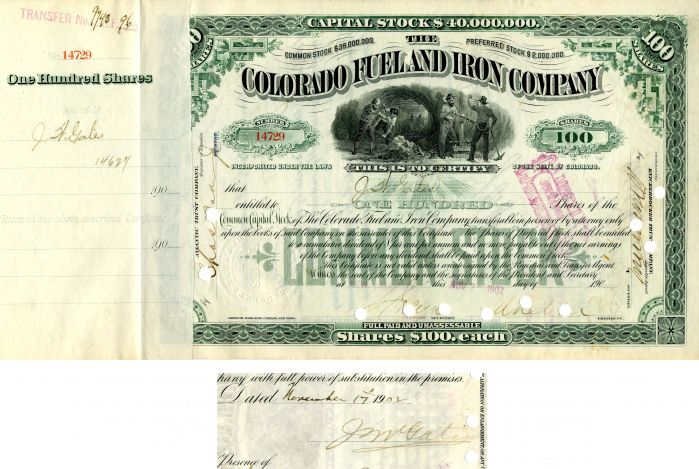 Issued to and signed on the back by John W. Gates.

John Warne Gates (May 18, 1855  August 9, 1911), also known as "Bet-a-Million" Gates, was a pioneer promoter of barbed wire who became a Gilded Age industrialist. Gates was born in Winfield, Illinois and married Delora R. Baker of St. Charles, Illinois in 1874. The couple had one son, Charles Gilbert Gates. Gates graduated in 1876 from North Central College in Naperville, Illinois. Gates' career began with a trip to San Antonio, Texas in 1876 when Isaac Ellwood hired him as a salesman for the Washburn-Moen barbed wire company, and a dramatic demonstration with cattle penned into Military Plaza. He later started the Southern Wire Company of St. Louis, Missouri, which merged with the wire company of William Edenborn to form Braddock Wire Company, from which Consolidated Steel and Wire Company was organized in 1888. With the help of Chicago attorney Elbert Henry Gary he created a monopoly in the US wire industry in 1898 with American Steel and Wire Company, which was sold in 1901 to J. P. Morgan in a deal (also negotiated by Gary) to become part of the new U.S. Steel conglomerate. Gates was a founder of the The Texas Company which became the Texaco oil company. He became influential in the development of the city of Port Arthur, Texas when he took over the Kansas City, Pittsburg and Gulf Railroad in December 1899 after he forced it into bankruptcy along with its previous owner and Port Arthur founder Arthur Edward Stilwell. In a 1900 horse race in England, Gates won $600,000 on a $70,000 bet, which rumors escalated to over $1 million and conferred on him the nickname "Bet-A-Million". A compulsive gambler, he once participated in a marathon poker game on a train journey from Chicago to New York. After a week of nearly constant play (meals were taken at the poker table), the match ended with about half a million dollars changing hands. Another story of Gates's gambling proclivities tells of his betting a million dollars on which of two raindrops on a window would reach the bottom first. He lost. Gates died in Paris, France in 1911, following an unsuccessful operation to remove a throat tumor. His funeral was held in the ballroom of the Plaza Hotel in New York. He was buried in Woodlawn Cemetery. The Gates Memorial Library in Port Arthur was funded by his widow and donated to the city in 1918. Originally the city's public library, Gates Memorial now serves as the campus library for Lamar State CollegePort Arthur.