Cleveland and Toledo Rail-Road Co. Issued to and Signed by D.N. Barney 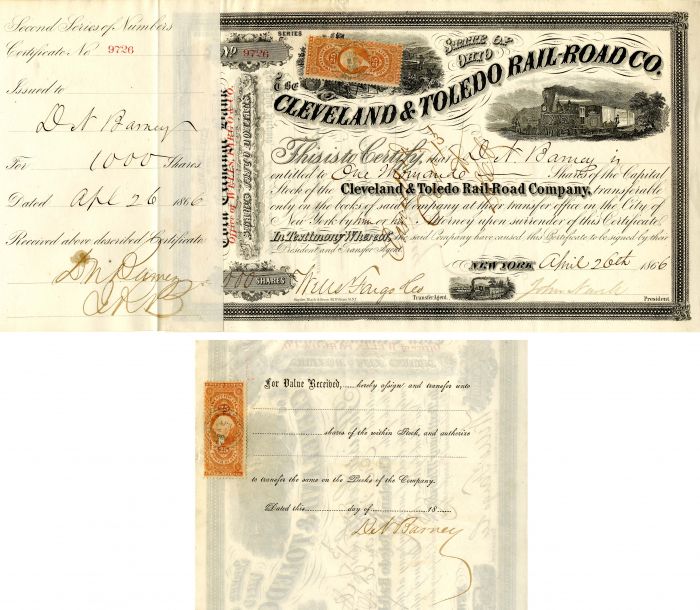 Stock issued to and signed on back by D.N. Barney.

Barney was born in 1808 at Henderson, New York, the son of John Barney (17751863) and Sarah (née Grow) Barney. His father was a farmer in Jefferson County, New York, when Danford and his younger brother Ashbel were born.

He was a descendant of Jacob Barney of Bradenham, Buckinghamshire, England, who settled at Salem, Massachusetts, about 1630. Through his brother, he was uncle to Charles T. Barney, the president of the Knickerbocker Trust Company, the collapse of which shortly before Barney's death sparked the Panic of 1907.

As a young man, Barney went to Sacketts Harbor, New York, where he was cashier in a bank. In 1842, Barney and his brother, Ashbel, went to Cleveland, Ohio, and engaged in business as forwarding and commission merchants as Danford N. Barney & Company. Barney resided in Cleveland at 24 Public Square and later 169 Euclid Street.

In 1849, Barney moved to Buffalo, New York, where he was a commission merchant and proprietor of a bank. When Edwin Barber Morgan resigned as president of Wells Fargo & Company on November 26, 1853, Barney was elected to succeed him. He was also elected to the board of directors, of which he remained a member until 1870.

In 1856, he moved to New York City. Besides serving as president and a director of Wells Fargo, Barney was also a director of John Butterfield's Overland Mail Company, organized in 1857 to provide government mail coach service from Tipton, Missouri, to San Francisco, California, by way of El Paso, Texas, and Yuma, Arizona. On April 15, 1863, Danford Barney, Benjamin Pierce Cheney and William Fargo were appointed a committee in New York to go to California "in the best interests of the company". Traveling by stage, they spent most of July, all of August, and most of September 1863 in California looking after the company's affairs. Similarly, on February 8, 1865, Barney was asked to visit London "in reference to a financial agency of the California Railroad" (i.e., the Central Pacific Railroad, the western portion of the transcontinental railroad then under construction).

In 1870, Danford Barney retired from the board of directors of Wells Fargo. He was one of the incorporators of the New York Elevated Railroad in 1871, serving as president upon his death.

Item ordered may not be exact piece shown. All original and authentic.
Email this to a friend
Request Info
Previous Item (Cleveland and Marietta Railway Company signed by Morris K. Jesup)    (Cleveland and Toledo Rail-Road Co. Issued to Jay Cooke and Co. - Stock Certificate) Next Item