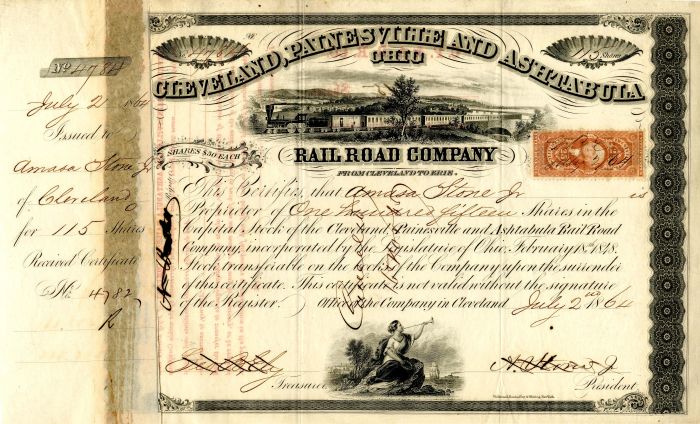 Amasa Stone, Jr. (April 27, 1818  May 11, 1883) was an American industrialist who is best remembered for having created a regional railroad empire centered in the U.S. state of Ohio from 1860 to 1883. He gained fame in New England in the 1840s for building hundreds of bridges, most of them Howe truss bridges (the patent for which he had licensed from its inventor). After moving into railroad construction in 1848, Stone moved to Cleveland, Ohio, in 1850. Within four years he was a director of the Cleveland, Columbus and Cincinnati Railroad and the Cleveland, Painesville and Ashtabula Railroad. The latter merged with the Lake Shore and Michigan Southern Railway, of which Stone was appointed director. Stone was also a director or president of numerous railroads in Ohio, New York, Pennsylvania, Indiana, Illinois, Iowa, and Michigan.

Stone played a critical role in helping the Standard Oil company form its monopoly, and he was a major force in the Cleveland banking, steel, and iron industries. Stone's reputation was significantly tarnished after the Ashtabula River railroad bridge, which he designed and constructed, collapsed in 1876 in the Ashtabula River railroad disaster. Stone spent many of his last years engaging in major charitable endeavors. Among the most prominent was his gift which allowed Western Reserve College (later known as Case Western Reserve University) to relocate from Hudson, Ohio, to Cleveland
Condition: Excellent