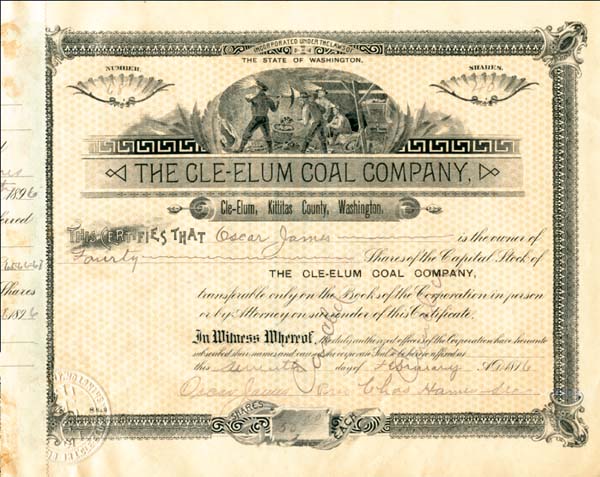 Coal Mines Trail is a pleasant, 4.7 mile, path that allows visitors to stroll in the footsteps of coal mining history. Though the trail actually starts in Cle Elum and extends to Ronald, it is easily accessible from Roslyn near the South-East end of Runje Field. The trail follows the path of the Northern Pacific Railroad branch line developed in 1886 to transport coal from the Roslyn/Cle Elum Coal Field. In 1887, the branch was extended to the #3 Mine where Ronald developed. The Roslyn/Ronald line was operated until 1986, and then in 1994, it began its conversion to this public recreational trail. (http://whyroslyn.com) Also available unissued at a lesser price. Please inquire if interested.

Cle Elum (/kli ˈɛləm/ klee ELL-um) is a city in Kittitas County, Washington, United States. The population was 1,872 at the 2010 census. About 96 miles (154 km) by car from Seattle, Cle Elum is a popular area for camping and outdoor activities.

Some assert that the selection of the Stampede Pass was determined by the coal discovery. In the spring of 1886 the railroad engineers under Mr. Virgil Bogue and Mr. Herbert Huson were making their survey through the region with the intent of establishing a station. At the site of the future city, a Northern Pacific Railway station was named Clealum after the Kittitas name Tle-el-Lum (tlielləm), meaning "swift water", referring to the Cle Elum River. Maps of the United States Postal Guide used two words while other early maps show it as one word: Clealum. In 1908, Clealum was altered to Cle Elum. The name was given to the river, the city, and Cle Elum Lake. Walter Reed entered into a partnership with Thomas Johnson of Ellensburg and laid out sixty-five acres as a site. This was legally dedicated on July 26, 1886. Mr. Johnson had owned a sawmill on Wilson Creek, in Grant County and he moved the mill to the new location in the vicinity of the new town. The partners, Reed and Johnson, established what was undoubtedly the largest mill up to that time in central or Eastern Washington, cutting 40,000 feet of board lumber per day. At the same time, Frederick Leonhard, who, with his brother-in-law, Gerrit d'Ablaing, had been carrying on a mill on Cooke Creek and later on the Naneum, moved to the vicinity of Cle Elum. They cut a large part of the lumber for the Stampede Tunnel.

Tragedy struck the area when on July 16, 1908, two carloads of blasting powder being unloaded by the Northwest Improvement Company exploded, killing at least nine people including miners, NIC store employees and a family with children living in a tent near the building. The explosion, located about three-quarters of a mile from Cle Elum's downtown, scattered debris and human remains and shattered windows across town. Accounts from residents equated the explosion to an earthquake.

In December 1910, loggers working for the Cascade Lumber Company near Cle Elum went on strike after the company reduced pay and began charging $5 per week for board. (equivalent to $139 in 2020)

In 1913, steps were taken to improve automobile access across the Cascade Mountains via Snoqualmie Pass. A $1,500,000 levy (equivalent to $39,300,000 in 2020) was approved in 1913 to improve and expand the state's highways. The majority of the levy ($590,743) went to construction of the Sunset Highway between Spokane and Seattle. This major cross-state highway would pass directly through Cle Elum's business district, and as it was one of the first towns reached after traveling east across the pass, would greatly benefit from its construction. That same year, reflecting on the prosperity of the coal mines, the city's second bank was chartered. By 1914, Cle Elum's population had risen to 3,000 from about 100 at the turn of the 20th century.

Cle Elum's greatest disaster occurred on June 25, 1918, when a huge fire wiped out over seventy acres of the city (29 city blocks) causing over $500,000 (about $8.6 million today) in damages. The cause was later determined to most likely to be a cigarette butt thrown into a pile of garbage behind a theater. Thirty businesses and 205 houses were destroyed, leaving more than 1,800 people homeless. Following the incident, aid from across the state began pouring in. The Red Cross brought tents from Camp Lewis to house displaced citizens while soldiers were sent from Ellensburg to guard businesses. Yakima and Portland also sent aid to the city. No lives were lost in the incident.

High insurance rates on Cle Elum's many wooden structures inhibited many people from purchasing them. One of the few buildings in downtown Cle Elum to survive the fire was the Cle Elum State Bank Building, built in 1906; it still stands today. The rest of downtown was quickly rebuilt with brick and many of these buildings still stand.