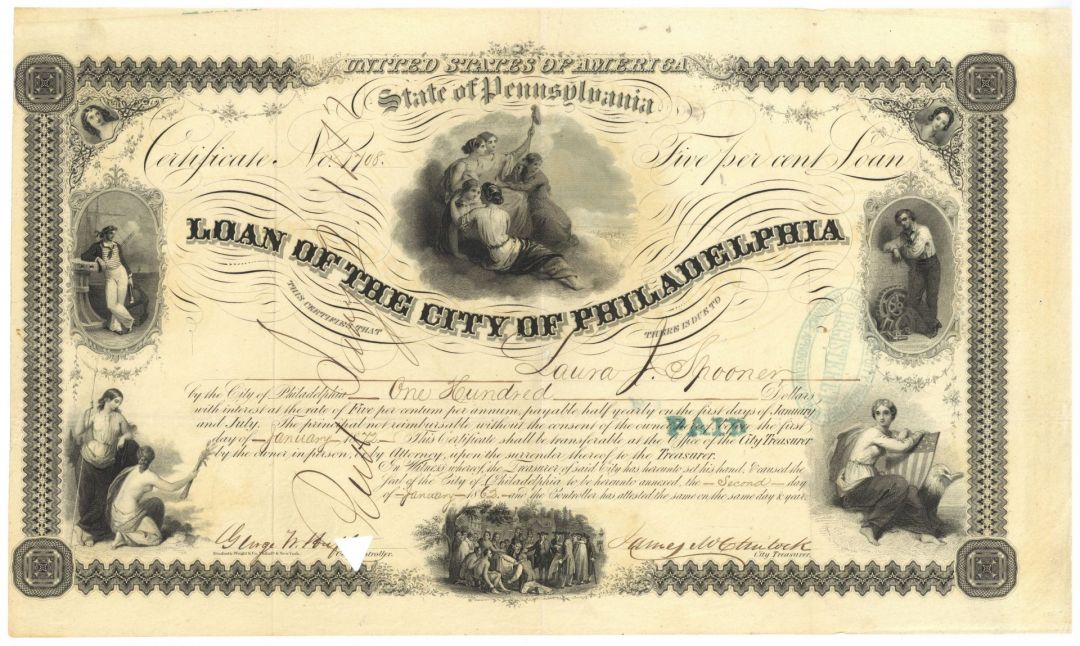 Philadelphia was founded in 1682 by William Penn, an English Quaker. The city served as capital of the Pennsylvania Colony during the British colonial era. Philadelphia went on to play a historic and vital role in the 18th century as the central meeting place for the nation's founding fathers whose plans and actions in Philadelphia ultimately inspired and resulted in the American Revolution. Philadelphia hosted the First Continental Congress in 1774 following the Boston Tea Party, preserved the Liberty Bell, and hosted the Second Continental Congress during which the founders signed the Declaration of Independence, which historian Joseph Ellis has described as "the most potent and consequential words in American history." Once the Revolutionary War commenced, both the Battle of Germantown and the Siege of Fort Mifflin were fought within Philadelphia's city limits.

The U.S. Constitution was later ratified in Philadelphia at the Philadelphia Convention of 1787. Philadelphia remained the nation's largest city until 1790, when it was surpassed by New York City, and served as the nation's first capital from May 10, 1775 until December 12, 1776 and on four subsequent occasions during and following the American Revolution, including from 1790 to 1800 while the new national capital of Washington, D.C. was under construction.

In the 19th and 20th centuries, Philadelphia became a major national industrial center and railroad hub. Its industrial jobs attracted European immigrants, most of whom initially came from Germany and Ireland, the two largest reported ancestry groups in the city as of 2015. Later immigrant groups in the 20th century came from Italy and other Southern European and Eastern European countries. In the early 20th century, Philadelphia became a prime destination for African Americans during the Great Migration after the American Civil War. Puerto Ricans began moving to the city in large numbers in the period between World War I and II, and in even greater numbers in the post-war period. The city's population doubled from one million to two million people between 1890 and 1950.

Philadelphia's many universities and colleges make it a top national center for education and academic research. As of 2019, the Philadelphia metropolitan area was estimated to be the nation's ninth largest metropolitan economy with a gross metropolitan product (GMP) of $490 billion. Philadelphia is the center of economic activity in Pennsylvania and is home to five Fortune 1000 companies. The Philadelphia skyline is expanding, with a market of almost 81,900 commercial properties in 2016, including several nationally prominent skyscrapers. Philadelphia has more outdoor sculptures and murals than any other American city. Fairmount Park, when combined with the adjacent Wissahickon Valley Park in the same watershed, is one of the largest contiguous urban park areas in the United States. The city is known for its arts, culture, cuisine, and colonial and Revolution-era history, attracting 42 million domestic tourists in 2016 who spent $6.8 billion, generating an estimated $11 billion in total economic impact in the city and surrounding four counties of Pennsylvania. Philadelphia and the Delaware Valley have become a biotechnology and venture capital hub; and the Philadelphia Stock Exchange, now owned by Nasdaq, tracks the Philadelphia Semiconductor Index, also known as the SOX. Philadelphia is home to a culturally and philanthropically active LGBTQ+ community and culture. The city has five professional sports teams and has played an influential role in the development and evolution of American music, especially R&B, soul, and rock.

Philadelphia has spawned many U.S. firsts, including the nation's first library (1731), hospital (1751), medical school (1765), national capital (1774), university (by some accounts) (1779), stock exchange (1790), zoo (1874), and business school (1881). Philadelphia contains 67 National Historic Landmarks, including the World Heritage Site of Independence Hall. In 2015, Philadelphia was the first U.S. city to be named to the Organization of World Heritage Cities. Throughout its history through the present day, a number of notable Philadelphians have proven influential across a broad range of fields, including government and politics, business, academia, public advocacy, art, music, and professional and Olympic sports.