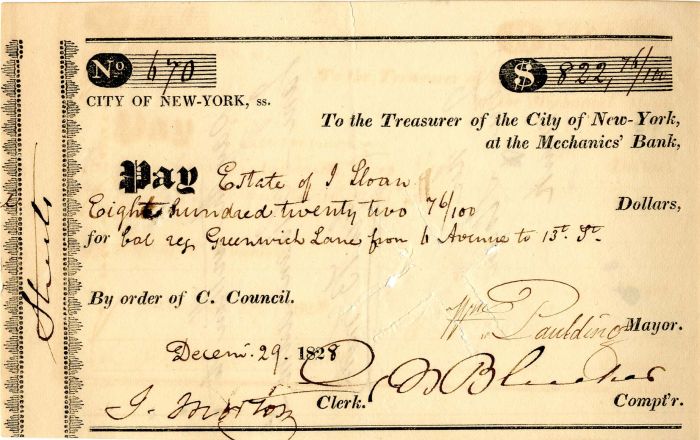 Early Check signed by the then mayor of NYC, William Paulding, Jr.

William Paulding Jr. (March 7, 1770  February 11, 1854) was a United States Representative from New York and the 56th and 58th Mayor of New York City. He was the Adjutant General of New York for two non-consecutive terms. Paulding was born in Philipsburgh (now Tarrytown) in the Province of New York on March 7, 1770. He was the son of William Paulding Sr. (17351835) and the brother of Julia Paulding (wife of U.S. Representative William Irving) Catharine Paulding (wife of Mordecai Hale), and James Kirke Paulding, the United States Secretary of the Navy under President Martin Van Buren. Paulding was a cousin of Revolutionary war hero John Paulding, one of the captors of Major John André.

He completed preparatory studies, studied law, was admitted to the bar and commenced practice in New York.

He was elected as a Democratic-Republican to the Twelfth Congress, holding office from March 4, 1811, to March 3, 1813 and was a brigadier general of the New York militia. He served in the War of 1812 and was a delegate to the New York constitutional convention in 1821.

Paulding was Adjutant General of New York. From 1824 to 1826 he was Mayor of New York City.

Paulding was married to Maria Rhinehander (17841851), and commissioned Lyndhurst near Tarrytown, the extant mansion designed by Alexander Jackson Davis, later owned by merchant George Merritt, and railroad tycoon Jay Gould. Together, they were the parents of:

He died in Tarrytown on February 11, 1854. He was buried in the Paulding family vault at the Old Dutch Burying Ground in Sleepy Hollow, New York. Paulding Avenue in the Morris Park section of The Bronx is named after him.

Morton was born in New York City on July 8, 1761. He studied law at The College of New Jersey, the predecessor of Princeton University; however, Morton never practiced law.

Morton was the marshal for the First inauguration of George Washington. When it was found that no bible was available, Morton retrieved the Lodge Bible from St. John's Lodge where he was the Worshipful Master.

Morton was an active Freemason, and was the Grand Master of Grand Lodge of New York from 180104. The Grand Lodge of New York established an award named for Morton, known as the "Jacob Morton Award", given to Masons or Masonic Organizations that have demonstrated exceptional voluntary service to their community. In 1796, Jacob Morton was listed as the presiding officer of Ancient Encampment, Knights Templar (New York City), in its first published list of officers. He remained in that office until 1810, when all traces of the encampment were lost. In 1815, the Grand Encampment of Knights Templar of New York was created. On August 16, 1823, the Grand Encampment issued a warrant to Morton Encampment No. 4 (now Morton Commandery No. 4), which was named in honor of General Morton.

Morton as promoted to brigadier-general in 1804. The Brigade he commanded was known as "Morton's Brigade of Artillery," which was the precursor for the Seventh Regiment of New York.

As Major-General, Morton led the New York Militia during the War of 1812.

Condition: Good
Item ordered may not be exact piece shown. All original and authentic.
Email this to a friend
Request Info
Previous Item (City of New-York at the Mechanics' Bank signed by Jacob A. Westervelt - Autographed Check)    (City of Philadelphia $100 Bond) Next Item