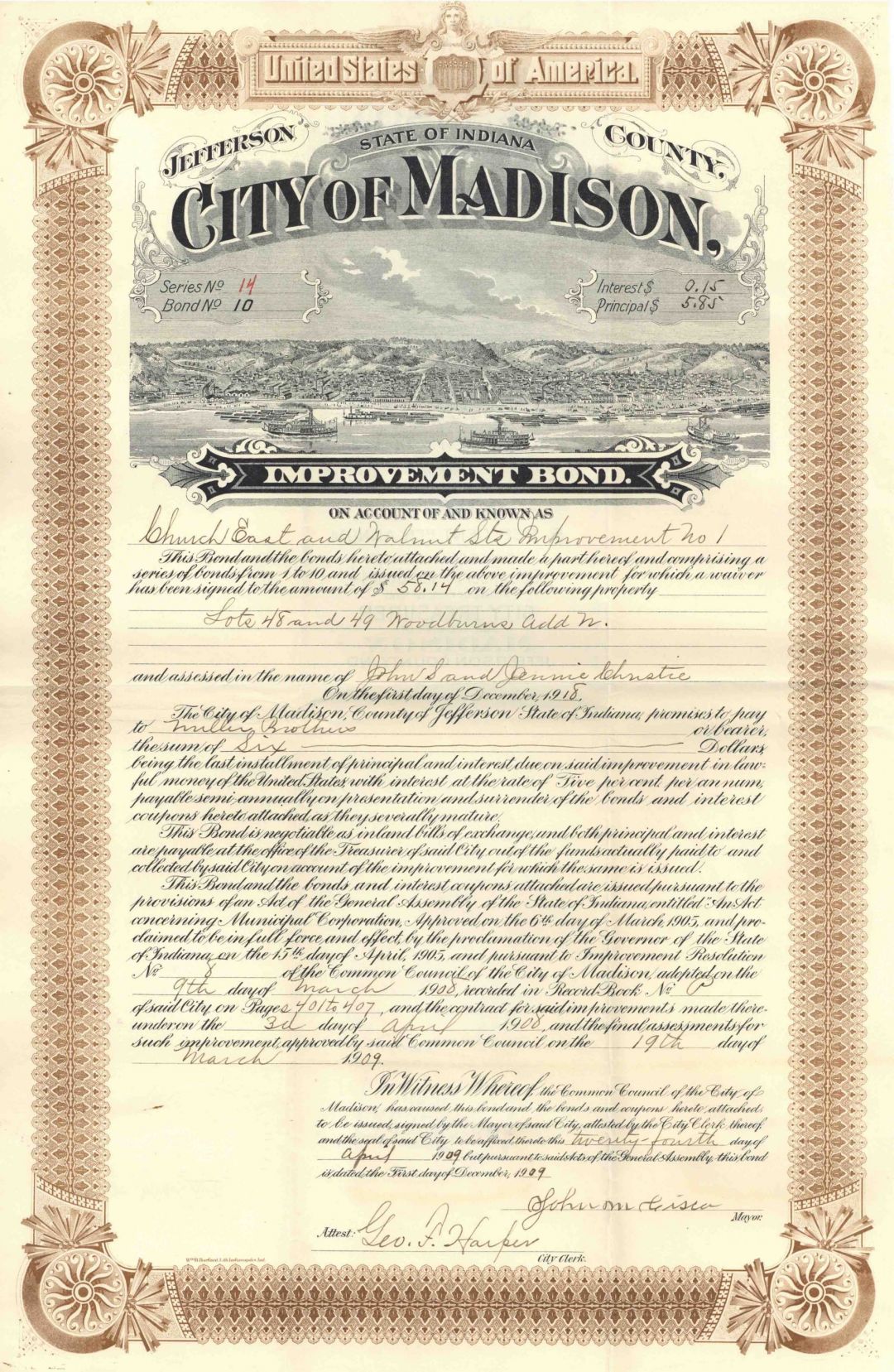 Madison is a city in and the county seat of Jefferson County, Indiana, United States, along the Ohio River. As of the 2010 United States Census its population was 11,967. Over 55,000 people live within 15 miles (24 km) of downtown Madison. Madison is the largest city along the Ohio River between Louisville and Cincinnati. Madison is one of the core cities of the Louisville-Elizabethtown-Madison metroplex, an area with a population of approximately 1.5 million. In 2006, the majority of Madison's downtown area was designated the largest contiguous National Historic Landmark in the United States133 blocks of the downtown area is known as the Madison Historic Landmark District.

Madison was laid out and platted in 1810, and the first lots were sold in 1811 by John Paul. It had busy early years due to heavy river traffic and its position as an entry point into the Indiana Territory along the historic Old Michigan Road. Madison's location across the Ohio River from Kentucky, a slave state, made it an important location on the Underground Railroad, which worked to free fugitive slaves. George DeBaptiste's barbershop in town became a nerve center of the local group. By 1850, Madison was the third-largest city in Indiana (after New Albany and Indianapolis), and among the 100 largest cities in the U.S.

Indiana's first railroad, the Madison & Indianapolis Railroad, was built there from 1836 to 1847. Chartered in 1832 by the Indiana State Legislature as the Madison Indianapolis & Lafayette Railroad, and construction begun September 16, 1836, the railroad was transferred to private ownership on January 31, 1843, as the Madison & Indianapolis Railroad. Successful for more than a decade, the railroad went into decline and was sold at foreclosure in 1862, renamed the Indianapolis & Madison Railroad, and after a series of corporate transfers, became part of the massive Pennsylvania Railroad system in 1921. In March 1924, the Madison Area Chamber of Commerce was founded to aid area business growth and development. Conrail much later bought Pennsylvania Railroad, but the deal left out a 26-mile (42 km) stretch of track from North Vernon to Madison. Madison Port Authority purchased this, forming Madison Railroad in 1975. Read more at https://en.wikipedia.org/wiki/Madison,_Indiana

Item ordered may not be exact piece shown. All original and authentic.
Email this to a friend
Request Info
Previous Item (Cofrode and Saylor, Incorporated - $1,000 Bond)    (City of New Brunswick) Next Item