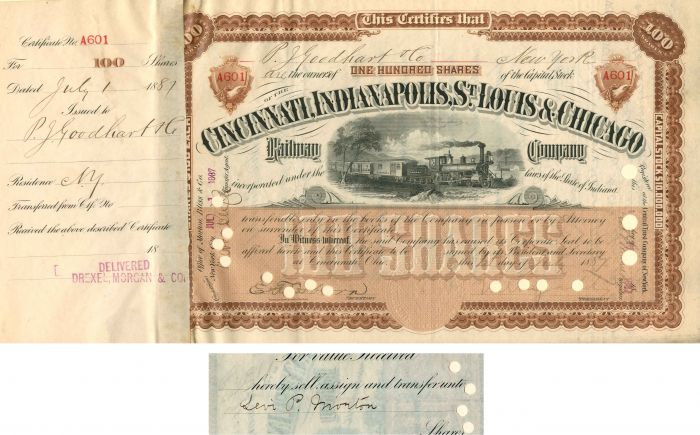 Stock transferred to Levi Morton. Levi Parsons Morton (May 16, 1824  May 16, 1920) was the 22nd vice president of the United States from 1889 to 1893. He also served as United States ambassador to France, as a US representative from New York, and as the 31st governor of New York. The son of a Congregational minister, Morton was born and educated in Vermont and Massachusetts, and trained for a business career by clerking in stores and working in mercantile establishments in Massachusetts and New Hampshire. After relocating to New York City, Morton became a successful merchant, cotton broker, and investment banker. Active in politics as a Republican, Morton was an ally of Roscoe Conkling. He was twice elected to the United States House of Representatives, and he served one full term, and one partial one (March 4, 1879  March 21, 1881). In 1880, Republican presidential nominee James A. Garfield offered Morton the vice presidential nomination in an effort to win over Conkling loyalists who were disappointed that their choice for president, Ulysses S. Grant, had lost to Garfield. Conkling advised Morton to decline, which he did. Garfield then offered the nomination to another Conkling ally, Chester A. Arthur, who accepted. After Garfield and Arthur were elected, Garfield nominated Morton to be Minister Plenipotentiary to France, and Morton served in Paris until 1885. In 1888, Morton was nominated for vice president on the Republican ticket with presidential nominee Benjamin Harrison; they were elected, and Morton served as vice president from 1889 to 1893. In 1894, Morton was the successful Republican nominee for governor of New York, and he served one term, 1895 to 1896. In retirement, Morton resided in New York City and Rhinebeck, New York. He died in 1920, and was buried at Rhinebeck Cemetery.