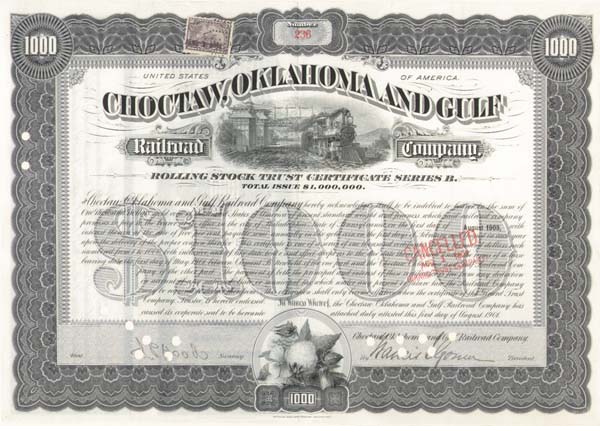 The Choctaw, Oklahoma and Gulf Railroad (CO&G), known informally as the "Choctaw Route," was an American railroad in the states of Arkansas and Oklahoma. The company, originally known as the Choctaw Coal and Railway Company, completed its main line between West Memphis, Arkansas and western Oklahoma by 1900. In 1901 the CO&G chartered a subsidiary company, the Choctaw, Oklahoma and Texas Railroad, to continue construction west into the Texas panhandle, and by 1902 the railroad had extended as far west as Amarillo.

The CO&G came under the control of the Chicago, Rock Island and Pacific Railroad (the "Rock Island") in 1902, and was formally merged into the Rock Island on January 1, 1948. The Memphis-Amarillo route remained an important main line for the Rock Island, hosting local and transcontinental freight traffic as well as passenger trains such as the Choctaw Rocket from 1940-1964.

Ownership of the Choctaw Route's railway components were split into numerous pieces as a result of the dissolution of the Rock Island Railroad in 1980. Some segments of the former CO&G were abandoned; others remain in use by the Union Pacific Railroad and various short lines. As of 2014, the former Choctaw Route can be described from east to west as:

The former Choctaw Route passenger depot in Little Rock, Arkansas, is now a component of the William J. Clinton Presidential Center and Park, though the adjoining historic freight depot was razed as part of the Clinton Center's development.