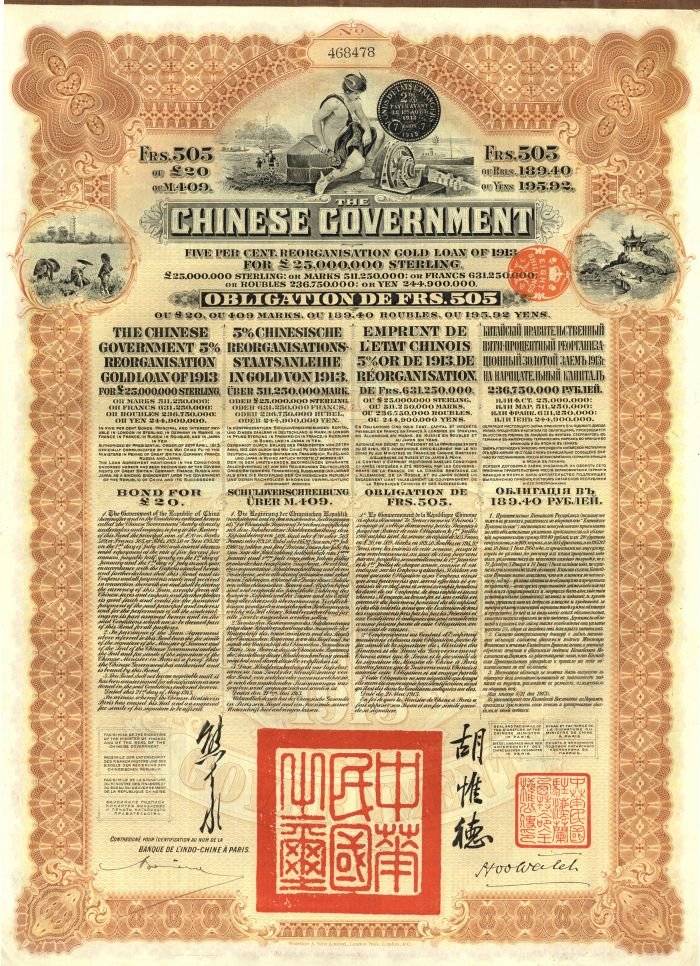 1913 - 5% Reorganisation Gold Loan The Reorganisation Gold Loan of 1913 was for the capital sum of £25,000,000. The Loan was, "...authorized by Presidential Order of 22nd April 1913 officially communicated by the Wai Chiao Pu to the Ministers in Peking of Great Britain, Germany, France, Russia and Japan." The newly appointed President of the Republic of China, Yuan Shih Kai, initially approached Britain, France, Germany and United States of America seeking a substantial loan to assist the fledgling government of the Republic of China. Later this group was expanded to include Japan and Russia, but eventually the United States of America withdrew from participation, leaving five countries which agreed to assist the Chinese Government with financial aid. The principal financial institutions which participated in the loan arrangements were the Hongkong & Shanghai Banking Corporation, Deutsch-Asiatiche Bank, Banque de I'Indo-Chine and Russian Asiatic Bank. The Yokohama Specie Bank participated on behalf of Japan, but did not issue separate bonds, countersigned by the bank. Arrangements were made as to convertibility into Japanese Yen of the bearer bonds issued by the other four issuing banks. The banks all received 6% commission allocated to each bank together with bonds issued are detailed in the data tables below: Hongkong & Shanghai Banking Corporation £7,416,680 Deutsch-Asiatiche Bank £6,000,000 Banque de I'Indo-Chine £7,416,660 Russian Asiatic Bank £2,777,780 Russian Asiatic Bank (Belgium) £1,388,880.

The purpose of the loan was to enable the new government of the Republic of China to meet financial liabilities inherited from the previous organization of government institutions and to meet the administrative costs. The loan was secured upon the entire revenues of the Salt Administration of China. In some ways this was a rather dubious security for such a large-scale loan as the entire Salt Gabelle (Salt Tax) had already been committed for other purposes with any surplus being pledged as a security against the Crisp Loan of 1912. However there was a further provision that foreigners would assist in the reorganisation of the collection of Salt Tax revenues and if the loan was at any time in default, the Salt Tax revenues were to be administered by the Maritime Customs Administration which was primarily under the control of foreigners. Coupons were payable on 1st January and 1st July each year. The loan has been in default since 1939. As an interesting footnote to this loan, Mr. M.E. Weatherall, who was a senior official of the Chinese Maritime customs Service in 1921 was quoted in the publication "Wayfoong" as making the following observation; "I believe that I am correct in saying that the greater part, if not all, of the reorganisation loan of 1913 was accounted for by statements and vouchers, but that in actual fact very little of it was ever applied to the purposes for which it was lent. It disappeared mysteriously and nobody knows where it has gone."

Song Jiaoren was assassinated in March 1913. Some people believe that Yuan Shikai was responsible, and although it has never been proven, he had already arranged the assassination of several pro-revolutionist generals. Animosity towards Yuan grew. In April he secured a Reorganization Loan of 25 million pounds sterling from Great Britain, France, Russia, Germany and Japan, without consulting the parliament first. The loan was used to finance Yuan's Beiyang Army.

On 20 May, Yuan concluded a deal with Russia that granted Russia special privileges in Outer Mongolia and restricted Chinese right to station troops there. Kuomintang members of the Parliament accused Yuan of abusing his rights and called for his removal. On the other hand, the Progressive Party (Chinese: 進步黨; pinyin: Jìnbùdǎng), which was composed of constitutional monarchists and supported Yuan, accused the Kuomintang of fomenting an insurrection. Yuan then decided to use military action against the Kuomintang.

In July 1913 seven southern provinces rebelled against Yuan, beginning the Second Revolution (Chinese: 二次革命; pinyin: Èrcì Gémìng). There were several underlying reasons for the Second Revolution besides Yuan's abuse of power. First was that most Revolutionary Armies from different provinces were disbanded after the establishment of the Republic of China, and many officers and soldiers felt that they were not compensated for toppling the Qing Dynasty. These factors gave rise to much discontent against the new government among the military. Secondly, many revolutionaries felt that Yuan Shikai and Li Yuanhong were undeserving of the posts of presidency and vice presidency, because they acquired the posts through political maneuvering rather than participation in the revolutionary movement. Lastly, Yuan's use of violence (such as Song's assassination) dashed the Kuomintang's hope of achieving reforms and political goals through electoral means.

However, the Second Revolution did not fare well for the Kuomintang. The leading Kuomintang military force of Jiangxi was defeated by Yuan's forces on 1 August and Nanchang was taken. On 1 September, Nanjing was taken. When the rebellion was suppressed, Sun and other instigators fled to Japan. In October 1913 an intimidated parliament formally elected Yuan Shikai President of the Republic of China, and the major powers extended recognition to his government. Duan Qirui and other trusted Beiyang generals were given prominent positions in the cabinet. To achieve international recognition, Yuan Shikai had to agree to autonomy for Outer Mongolia and Tibet. China was still to be suzerain, but it would have to allow Russia a free hand in Outer Mongolia and Tanna Tuva and Britain continuation of its influence in Tibet.