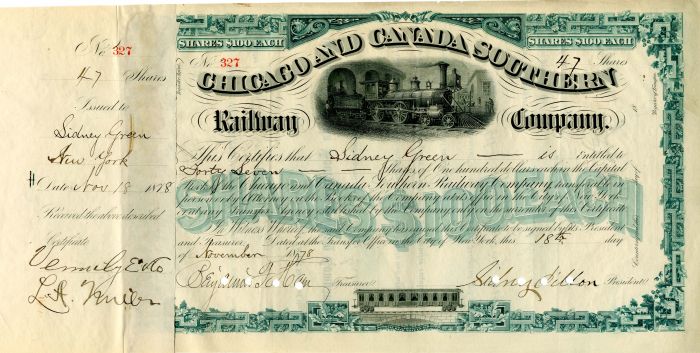 Sidney Dillon (1812-1892) Railroad executive , born in Northampton, New York. He left his impoverished family farm at age seven to work as a water boy on railroad construction sites, and progressed to overseer and foreman. One of America's premier railroad builders, Dillon began his career in the industry working as a water boy on the Mohawk and Hudson, one of America's earliest railroads. In 1840 his bid was accepted to build a small section of the Boston & Albany Railroad. This job launched his railroad career, which included becoming the major contractor for the Union Pacific Railroad. He was actively involved in the construction of numerous roads, his largest being the Union Pacific, with which he became actively involved in 1865 through a stock purchased in the Credit Mobilier. As one of the principal contractors for the Union Pacific, Dillon's vast experience in the construction of railroads proved invaluable. He took part in the laying of the last rail in 1869 and received one of the ceremonial silver spikes used to complete the project. He served as director of the Union Pacific (186492) and twice as its president (187484, 18902). He wrote Historic Moments: Driving the Last Spike of the Union Pacific, published posthumously in Scribner's magazine (Aug 1892). Following 1870, Dillon was primarily known as a financier, becoming involved with Jay Gould in numerous ventures as well as serving on the board of directors of the Western Union Telegraph Co.