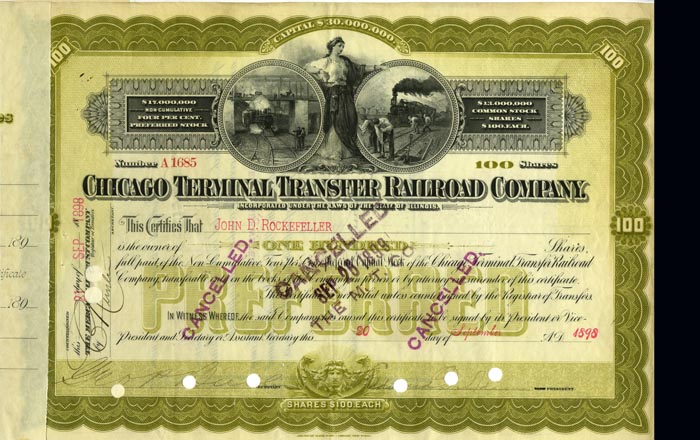 Years: 1898
Color: Olive
Issued to and signed by John D. Rockefeller. John Davison Rockefeller (1839-1937) Founder and one of the original partners of Standard Oil; Oil industry pioneer; Capitalist. At one time reputedly the world's richest man, Rockefeller began his career in Cleveland, Ohio as a successful merchant, prior to the Civil War. In 1863, he and his partners built a refinery which grew into a business that eventually absorbed many other Cleveland refineries and expanded into Pennsylvania oil fields to become the world's largest refining concern. During this time, he was able to expand his operations while others were failing due the talented people with whom he had surrounded himself, to the efficiency of his operations, and to a variety of what are now considered unscrupulous business practices for which he became famous. In 1870, Rockefeller organized the Standard Oil Company of Ohio in order to improve the efficiency with which his operations were being run. In 1882, in part to streamline operations, and in part to avoid state controls, Rockefeller took a step which had a profound significance for American business by creating the Standard Oil Trust. Under this arrangement, a board of trustees took the stock of both the Standard Oil Company of Ohio and of all of its subsidiaries, and ran the combination through the board's executive committee. By this time, public criticism of Rockefeller and his methods was running at near-fever pitch and, in 1892, the Trust was dissolved by the Ohio Supreme Court. The Trust was divided into some 18-later over 30-corporations before being folded into another holding company, Standard Oil of New Jersey (1899). In 1911, the U.S. Supreme Court ordered this latter company dissolved, declaring that it was "a monopoly in restraint of trade," and thus illegal under the Sherman Anti-Trust Act. By this time Rockefeller had almost completely removed himself from business concerns, and was concentrating solely on his philanthropic projects. While the extent of his philanthropies are too numerous to list, among the most prominent are his founding of the University of Chicago (1889), the Rockefeller Institute for Medical Research (1901), the General Education Board (1902) and the Rockefeller Foundation (1913). It is estimated that Rockefeller gave away some $550 million during his lifetime.