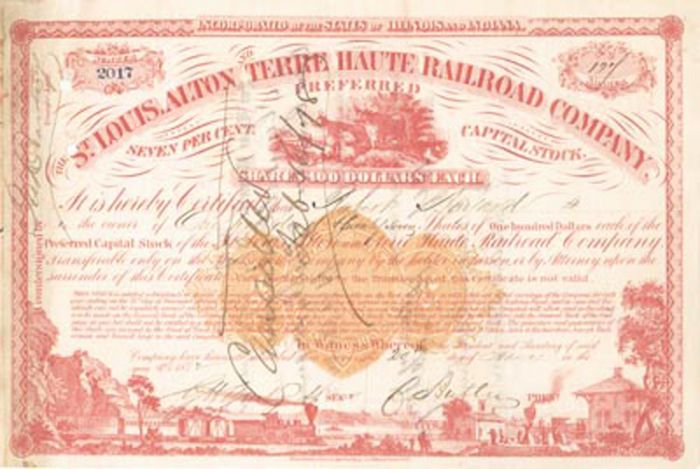 Years: 1870's
Cherry colored red with orange imprinted revenue Stock signed by Charles Butler. The color and extraordinary graphics of a sweeping vignette along the bottom of this stock are extremely exciting.

Charles Butler (1802-1897) was an American lawyer and philanthropist. He was born at Kinderhook Landing, Columbia Co., N.Y.; studied law in the office of Martin Van Buren at Albany, N. Y.; and was admitted to the bar in 1824. He became wealthy by accumulating land at the site of Chicago, Illinois and Toledo, Ohio.  He also bought interest in the Michigan Southern, the Rock Island, and the Chicago & Northwestern railroads. It was his accumulation of Illinois land and railway building that helped turn Chicago into a city.

In 1835, he was one of the founders of the Union Theological Seminary in the City of New York. In 1836, he was appointed to the council of NYU, (where he served as an instructor) and he was a long serving Council President.  He was a relative of (both by blood and as an in-law), as well as a business associate of William Butler Ogden, the first mayor of Chicago.

Item ordered may not be exact piece shown. All original and authentic.
Email this to a friend
Request Info
Previous Item (First National Bank of Cooperstown, NY - Check - Baseball Hall of Fame)    (Set of 3 Different Varieties of the Mccormick Harvesting Machine Co. - Group of Three Checks) Next Item