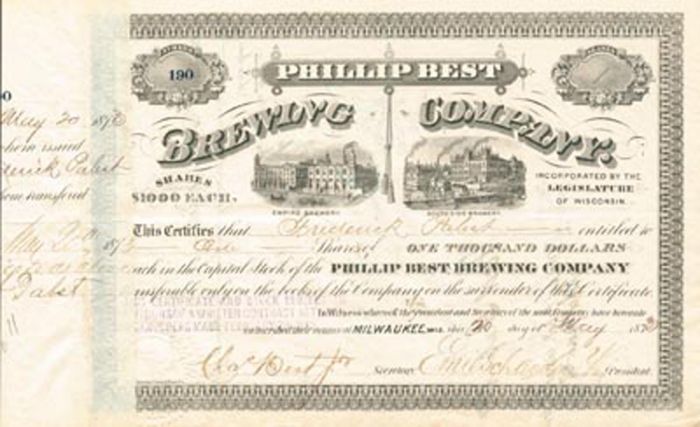 Frederick Pabst (1836-1904), and Charles Best Jr., Brewers. Both sign this 1873 Wisconsin stock. The Stock is issued to Frederick Pabst and is signed twice! Once at the stub and at the back. Nice double vignette of the Empire and Southside breweries, the companys two breweries in Milwaukee. This company is the forerunner of what eventually became Pabst Brewing Company. Jacob Best was among the first brewers to engage in the business in Milwaukee, Wisconsin, establishing a plant in 1844. His son Phillip rose to take control of the brewery by 1860, and ultimately retiring in 1864, leaving it to his son-in-laws, Emil Schandein, who signs as Vice President. With Fred at the helm of the company, Pabst rose to become the largest brewery in the world by the turn of the century. Stocks of significant breweries of this caliber signed by the early important brewers in the U. S. are extremely rare and this represents a nice opportunity to acquire an important certificate from this industry. Brewery stocks are very popular. Excellent Condition.