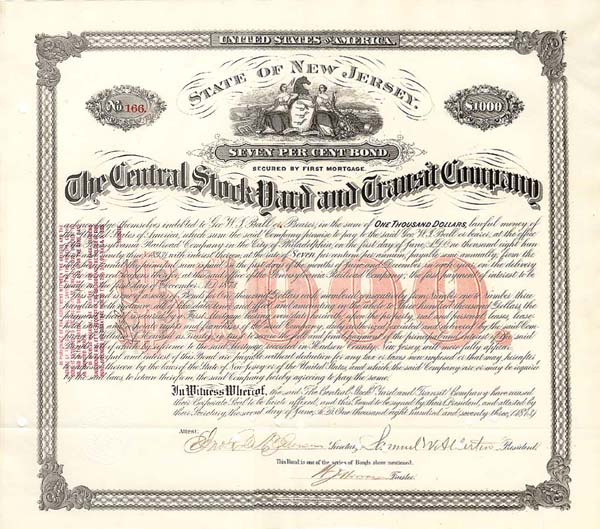 $1,000 Railroad Bond. This is a railroad stockyard for cattle, etc. and a railroad. State Crest of New Jersey. Includes locomotive at left. Great!!! Available in Very Fine Condition or Fine Condition with Tear Repairs at a lesser price. Please specify type.

In relation to Stockyards, cattle feeding on a large scale was first introduced in the early 60's, when a demand for higher quality beef in large quantities emerged. Farmers started becoming familiar with the finishing of beef, but also showed interest in various other aspects associated with the feedlot such as soil health, crop management, and how to manage labour costs. From the early 60's to the 90's feeding beef cattle in the feedlot style showed immense growth, and even today the feedlot industry is constantly being upgraded with new knowledge and science as well as technology. In the early 20th century, feeder operations were separate from all other related operations and feedlots were non-existent. They appeared in the 1950s and 1960s as a result of hybrid grains and irrigation techniques; the ensuing larger grain crops led to abundant grain harvests. It was suddenly possible to feed large numbers of cattle in one location and so, to cut transportation costs, grain farms and feedlot locations merged. Cattle were no longer sent from all across the southern states to places like California, where large slaughter houses were located. In the 1980s, meat packers followed the path of feedlots and are now located close by to them as well.

The Central Stockyard and Transit Co was located in Harsimus Cove, New Jersey.

Harsimus (also known as Harsimus Cove) is a neighborhood within Downtown Jersey City, Hudson County, New Jersey, United States. The neighborhood stretches from the Harsimus Stem Embankment (the Sixth Street Embankment) on the north to Christopher Columbus Drive on the south between Coles Street and Grove Street or more broadly, to Marin Boulevard. It borders the neighborhoods of Hamilton Park to the north, Van Vorst Park to the south, the Village to the west, and the Powerhouse Arts District to the east. Newark Avenue has traditionally been its main street. The name is from the Lenape, used by the Hackensack Indians who inhabited the region and could be translated as Crows Marsh. From many years, the neighborhood was part of the "Horseshoe", a political delineation created by its position between the converging rail lines and political gerrymandering.

In 1629, the Dutchman Michael Reyniersz Pauw obtained a patent for all the land in what would become Hudson County, naming it Pavonia. Unable to fulfill a patroon charter provision that he set up a plantation with fifty permanent settlers, the Dutch West India Company sold a part to his superintendent, who had built a homestead in 1634 and was the first of many Van Vorsts to play important roles in the development of the city. A family homestead built in 1647 was demolished in 1967. Conflict with Native Americans compromised the settlement 1643, which continued to grow after the 1645 treaty ending Kieft's War. Again in 1655, the area was attacked in a conflict called the Peach Tree War. In 1660, it came under the jurisdiction of Bergen, New Netherland the main village of which was located at Bergen Square.

Once the area was ceded to the British after the surrender of Fort Amsterdam, New York claimed ownership to the high waterline along the west bank of the Hudson River and that any pier built there was under its jurisdiction, thus stifling development which would compete with the burgeoning New York City. Paulus Hook was the first to urbanize, and The City of Jersey was incorporated in various forms in 1820, 1829, and again in 1838. John Coles, a merchant from New York, was among the first to expand into Harsimus. The Supreme Court settled the matter of jurisdiction in the 1830s, creating a border mid-river. Harsimus grew with shipping along shoreline and residences farther inland. The short-lived Van Vorst Township later merged with its neighbor. Much of the housing stock from the maritime era is still intact. Many of the streets in the gridiron laid at the time have been renamed over the years. Moving away from the river they were originally called Hudson, River, Kelso, and Barnum. Provost and others to the west have stayed the same.

Harsimus was transformed by the development of the railroad industry. By 1870 much of the estuary flood zone was land-filled for the development of railyards, extending a quarter mile from Henderson Street. Three elevated right of ways were built: one from the Bergen Arches to the Erie Railroad Pavonia Terminal, the Harsimus Stem Embankment at 6th Street for the Pennsylvania Railroad (PRR), and another for its Jersey City Branch along Railroad Avenue (now Columbus Drive) to Exchange Place. The embankments and elevated lines separated adjoining neighborhoods. A small slip was created and still is called Harsimus Cove. Huge stockyards dominated the waterfront between the train terminals.

Harsimus' isolation was codified with gerrymandering, forming a horseshoe and creating a new nickname. The community consisted of Catholic immigrants, many of them Irish, who worked on the railroad. Infuxes of Ellis Island immigrants swelled the population. A vestige of the Slavic character of the area remains at the Ukrainian National Home. To diminish the Democratic power base, Republican power brokers redrew the voting district to consist solely of the Horseshoe so that they may protect other seats from Democratic threat. In the 1910s the Horseshoe power base produced the infamous Mayor Frank Hague who dominated the Hudson County political machine and influenced city, county, state, and federal politics for most of the first half of the 20th century. In 1941 a large fire struck the Horsehoe waterfront.

In the late 1950s, container shipping in Port Newark supplanted railroad ports along waterfront, which by the 1970s were abandoned, leading to a decline in population and economic activity. Urban renewal projects brought slum clearance of tenements along Grove Street as well as the removal of the PRR elevated rail right of way. Middle, low income, and senior housing projects were developed. A section of Grove Street was renamed Manila Avenue in recognition of the city's resident Overseas Filipinos. Henderson Street became Marin Boulevard for the first governor of Puerto Rico Luis Muñoz Marín to reflect the influx of Puerto Rican and Filipino residents. Railroad Avenue is now Columbus Drive, acknowledging the still large Italian population.

The renewal did not affect the 19th century blocks which were not demolished. A historic preservation movement and real estate reinvestment led to Harsimus's designation as a Historic District in 1987. Convenience to mass transit and relatively affordable rents attracted an artistic community, some of whom converted buildings to live/work spaces. Zoning in the form of "WALDO" (or Work and Live District Overlay) were unsuccessful in preserving and stimulating the creation of an arts district within the area where large warehouses still remained, and have given way the Powerhouse Arts District and the construction of residential highrises.

East of the neighborhood, the LeFrak Organization obtained title to most of the disused Erie-Lackawanna land and began the development of Newport, centered around the Port Authority Trans Hudson (PATH) Newport Station in the 1980s. To the south, the PRR abattoir were also acquired. Development plans did not include extending the 19th century urban grid to the waterfront, but the construction of large parking decks at the former and strip mall at the latter. The first segment of the Hudson-Bergen Light Rail opened in 2002, including the Harsimus Cove Station nearby the landmark Hudson and Manhattan Railroad Powerhouse.

Item ordered may not be exact piece shown. All original and authentic.
Email this to a friend
Request Info
Previous Item (El Carmen Grazing Co.)    (California Cattle and Land Co. - $100) Next Item