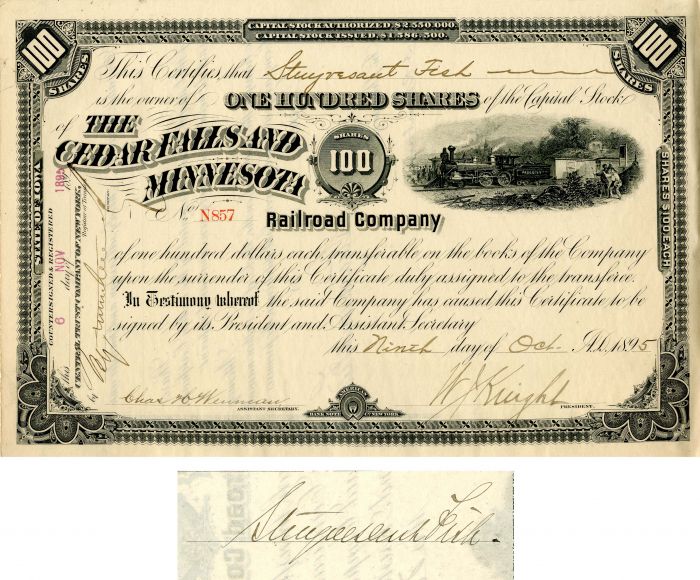 Stuyvesant Fish (1851-1923) was president of the Illinois Central Railroad.

Fish was born in New York City, the son of Hamilton Fish and his wife Julia Ursin Niemcewicz, née Kean. A graduate of Columbia College, he was later an executive of the Illinois Central Railroad, and as its president from 1887 to 1906 oversaw its period of greatest expansion. In 1906, he was removed from his position by E. H. Harriman, probably because of Fish's cooperation and participation with the state government in investigating the Mutual Life Insurance Company. Stuyvesant Fish also served on the board of directors of the National Park Bank.

He married Marion Graves Anthon on June 1, 1896. Marion, known as "Mamie", was a leader in New York and Newport society. She lived in a grand but plain Colonial Revival house, "Crossways", where her Harvest Festival Ball in August signaled the end of the Newport social season.

When Grand Duke Boris of Russia visited Newport, Mrs. Fish issued invitations for a dinner and ball in his honor; the night of the ball the Duke was detained by Mrs. Ogden Goelet, Mrs. Fish's rival as social leader, at whose home he was staying. About 200 guests had assembled in the hall at Crossways, and when the hour for dinner approached and there was no sign of the Duke, Mrs. Fish announced that the Duke was unable to come, but the Czar of Russia had agreed to be her guest. Suddenly the doors of the room were flung open and in walked His Imperial Majesty, dressed in his royal robes, wearing the Imperial Crown and carrying a scepter. The guests, including Senator Chauncey Depew, Pierpont Morgan, and Lord Charles Beresford, sank in a court curtsy, only to recover themselves with shrieks of laughter when they realized they were paying homage to Harry Lehr." (Rhode Island: a Guide to the Smallest State, 1937)

The house on Gramercy Park that was designed by Stanford White for Mrs. Stuyvesant Fish still stands. Stuyvesant Fish was a vestryman at Trinity Church, New York. They maintained his grandmother's Federal-style house at 21 Stuyvesant Street, but their New York house was a brick and limestone Italianate structure at 25 East 78th Street at Madison Avenue. The house is still standing; it too was designed by McKim, Mead, and White.