Stock signed by Wm. McKinley Jr. as president. Very Important! Rare! Twenty-fifth President of the United States, and the last veteran of the Civil War to be elected. By the 1880s, this Ohio native was a nationally known Republican leader; his signature issue was high tariffs on imports as a formula for prosperity, as typified by his McKinley Tariff of 1890. As the Republican candidate in the 1896 presidential election, he upheld the gold standard, promoted pluralism among ethnic groups, reshaped the issues of the day and inaugurated the Fourth Party System. His campaign, designed by Mark Hanna, introduced new advertising-style campaign techniques that revolutionized campaign practices and beat back the crusading of his arch-rival, William Jennings Bryan. The 1896 election was a realigning election that marked the beginning of the Progressive Era. McKinley presided over a return to prosperity after the Panic of 1893 and was reelected in 1900 after another intense campaign against Bryan, this one focused on foreign policy. As president, he fought the Spanish-American War. McKinley for months resisted the public demand for war, which was based on news of Spanish atrocities in Cuba, but was unable to get Spain to agree to implement reforms immediately. Later he annexed the Philippines, Puerto Rico, and Guam, as well as Hawaii, and set up a protectorate over Cuba. McKinley was shot twice by Leon Frank Czolgosz on Sept. 6, 1901, at the Pan-American Exposition. He had been standing outside the Temple of Music shaking hands with the public. Czolgosz waited in line with a pistol in his right hand concealed by a handkerchief. The first bullet grazed the presidents shoulder. The second, however, went through McKinley's stomach, colon, and kidney, and finally lodged in the muscles of his back. One bullet was easily found and extracted, but doctors were unable to locate the second bullet. The newly-developed X-ray machine was displayed at the fair, but doctors were reluctant to use it because they did not know what side effects it may have had on him. Also, ironically, the operating room at the exposition's emergency hospital did not have any electric lighting, even though the exteriors of many of the buildings at the extravagant exposition were covered with thousands of light bulbs. The surgeons were unable to operate by candlelight because of the ether used to keep the president unconscious. So the doctors were forced to use pans instead to reflect sunlight onto the operating table while they treated McKinley's wounds. McKinley's doctors believed he would recover, but McKinley eventually went into shock. Eight days after he was shot, he died from gangrene, which surrounded his wounds, on Sept. 14, 1901, in Buffalo. He was buried in Canton, Ohio. 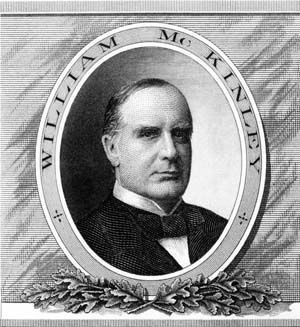