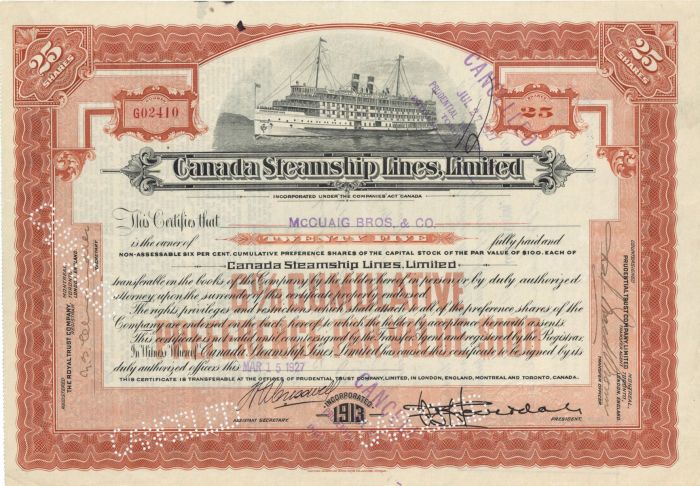 Canada Steamship Lines (CSL) is a shipping company with headquarters in Montreal, Quebec, Canada. The business has been operating for well over a century and a half.

CSL had humble beginnings in Canada East in 1845, operating river boats on the Saint Lawrence River in general commerce. The Richelieu Navigation Company was established by Jacques-Félix Sincennes and other Montreal businessmen. The company was amalgamated with Sir Hugh Allan's Canadian Navigation Company, to form the Richelieu and Ontario Navigation Company, in 1875. Subsequent growth over the years was tied to expansion of the canal system on the upper St. Lawrence River (the precursor to the Saint Lawrence Seaway), and to a new Welland Canal connecting to the upper Great Lakes.

The launching of the Northern Navigation Str. Noronic was set for June 2, 1913. A large number of Richelieu and Ontario Navigation Co.'s directors and guests went from Sarnia, Ontario on the Hamonic to witness the event. Shortly after the Hamonic entered Lake Superior, the managing director James Playfair was notified of the passing of his father John S. Playfair and he was transferred mid-lake to an R and O freighter, about 80 miles from Sault Ste. Marie and returned to Toronto by special train. The christening of the Noronic was performed by Mrs. E. Bristol, the wife of another director, instead of by Mrs. Playfair, as at first intended.

In the early part of December it was announced that Canada Transportation Lines would be renamed Canada Steamship Lines Limited.

CSL's growth through the industrial booms of both world wars was largely tied to the increasing importance of the steel industry in Ontario, where mills were built, or soon to be built, in Sault Ste. Marie, Hamilton, and Nanticoke. CSL also tapped into the last of the remaining coal traffic from Pennsylvania across the Great Lakes to railways in Canada. Following railway dieselization, subsequent coal traffic would be moved by CSL to large fossil-fuel burning electrical power plants.

In addition to its cargo shipping, the company expanded its overnight passenger shipping traffic as well. Most notably the popular Hamonic, Huronic and Noronic of the old Niagara Navigation Company 19021912 lineage (roughly 6,000 GRT and 350 foot a piece). Their last passenger ships, however, came out in 1928. They were the cruise ships St. Lawrence, Quebec and Tadoussac; all built at the Davie Shipbuilding and Repair Co. in Lauzon, P.Q. "St. Lawrence" was built in 1927, and Quebec and Tadoussac were identical sister ships of 1928. They ran together with Richelieu, the former Narraganset (1913) of Long Island Sound, which was purchased by CSL about the same time the other three were built by Davie. The three ships were all 350 feet in length, had a breadth of 70 feet, and were 8,000 tones GRT; Richelieu was slightly smaller. They sailed on the St Lawrence and Saguenay Rivers, departing from Montreal and stopping at Quebec City, Murray Bay and Tadoussac (where the company owned hotels) and up the Saguenay to Bagotville (La Baie). Richelieu was able to go on to Chicoutimi because of her shallower draft. Quebec burned at Tadoussac in 1950 with the loss of seven lives, and the other three ships continued on the route until 1965. After the opening of the St. Lawrence Seaway, Tadoussac's bow was modified to make her able to make a few trips into Lake Ontario, and even made occasional trips through the updated Welland Canal to Buffalo and Detroit in the early 1960s. With the Yarmouth Castle fire in 1965 near the Bahamas, stricter coast guard safety regulations in the form of the new international SOLAS program put an end to the three ship's long careers. The Richelieu, St. Lawrence, and Tadoussac were all sold to Joseph de Smedt of Belgium. Tadoussac was renamed Passenger No. 2 and Richelieu, Passenger No. 3. Passenger No. 2 and the old St. Lawrence were eventually scrapped after serving as accommodation ships in the early 1970s, while Passenger No. 3 was sold to Danish interests and was renamed St. Lawrence 2 and served as an accommodation ship for Eastern Bloc refugees before being sold to Arab interests in 1975 as workers' barracks in Sharjah, UAE, where she became half-buried in sand by 1981, and scrapped down by 1990. The earlier Hamonic had burned due to a dock side fire in 1945 at Point Edward and was later scrapped. Huronic had already been converted to carry only freight by 1944, was retired and scrapped in 1950.

CSL was found responsible for the disastrous September 1949 fire and destruction of its ship the SS Noronic in Toronto Harbour. The fire swept through the ship killing 118 to 139 passengers (many as they slept), but no members of the crew. Inadequate alarm, passenger evacuation plans, and neglected extinguishing systems are found at fault. The captain was suspended one year for abandoning the ship before ensuring crew and passengers were safe. She was demolished in 1950.

No new passenger ships were built by this line or most other shipping lines due to the declining passenger ferry trade. To date, and despite something of a resurgence in passenger traffic on the Great Lakes in recent years, CSL has no known plans for a cruise ship service on or off of the Great Lakes.

In 1951, Sir James Dunn, the owner of Algoma Steel, gained effective control over the company.

CSL saw operations increase exponentially in the late 1950s with the opening of the expanded Saint Lawrence Seaway and the timely discovery and exploitation of some of the world's largest iron ore deposits on the Labrador Peninsula in Labrador City, Schefferville, and Mont Wright. Ore was moved to Sept-Îles and Port-Cartier by the Quebec North Shore and Labrador Railway and Cartier Railway respectively, where it was then loaded into bulk carriers for transfer to Canadian and U.S. steel mills on the Great Lakes. CSL exploited this traffic by continually refining its self-unloading bulk carrier designs, coupled with improvements in stevedoring at various ports to arrive at a minimal number of human operators required.

Following his passing in 1956, Dunn's estate would eventually sell off the CSL shares. In 1963, a non-controlling share of CSL was purchased by Montreal-headquartered Power Corporation, a Quebec industrial conglomerate with interests in electricity generation, pulp and paper, and oil and gas. CSL continued operating and expanding its Great Lakes shipping line and the Collingwood and Lauzon shipyards through the 1960s, and witnessed several labour disputes.

At this time, CSL was given elevated status, where in the words of Power Corporation "...in order to increase its [Power Corporation's] own cash flow and take advantage of new federal tax regulations benefitting operating companies over holding companies, CSL took over most of Power's investment portfolio at book value."

CSL suffered losses in 1972 when forced to cover unexpected cost overruns in the construction of three 80,000-ton ocean-going tankers at Davie Shipbuilding. On November 22, 1973 Paul Martin was appointed President and CEO of the CSL Group. In 1974, CSL earnings were further hurt by an eight-week strike on the Great Lakes.

In 1976, Power Corporation reversed itself and took over the investment portfolio which had been sold to CSL five years earlier. CSL reverted to an operating division of Power Corporation at this time. On June 7, 1981, CSL President and CEO Paul Martin announced plans to expand outside of the Great Lakes and St. Lawrence River: "The Great Lakes are essentially a Canadian pond... Canadians have captured 95 percent of the business. Now we want our chance to try our wings on the oceans."

One month later, in July 1981, Power Corporation announced it was selling its subsidiary CSL Group for CA$195 million. CSL Group at this time included the shipping company, shipyards, engineering firms, and a bus service (Voyageur, previously known as Provincial Transport). The following month, in August 1981, Paul Martin and his friend Lawrence Pathy with the help of Gordon Black, secured financing and announced their intention to purchase CSL Group Incorporated for the price advertised by Power Corporation.

On August 9, 1983, citing federal government interference in the shipping industry, Martin stated: "then... they are going to come in with some grand and glorious package that will give the government control of the industry because they don't understand private enterprise."

By the mid-1980s, CSL's only remaining shipyard (Collingwood) was undergoing financial difficulties and was closed on September 12, 1986, with the loss of 800 jobs. At the same time, CSL Group Inc.'s expansion outside of Canada was well underway. In November 1988, President and CEO Paul Martin was elected as a Member of Parliament and stepped aside from directing the day-to-day operations of the company.

In March 1991, following changes to Canada's taxation laws regarding international earnings, CSL backed away from threats to move its headquarters outside of Canada, however in December the president who replaced Martin resigned in opposition to plans to move international operations outside the country.

In November 1993, the newly re-elected Paul Martin was appointed to the cabinet and named Minister of Finance. On February 1, 1994, Martin placed his shares in CSL Group Inc. under a "Supervisory Agreement" to be managed by lawyers and financial advisors, although he would be allowed to intervene in company decision-making should events warrant.

In June 2002, Martin quit the cabinet as Minister of Finance to pursue a bid for leadership of the Liberal Party of Canada. On March 11, 2003, Martin bowed to public and media pressure on his interest in CSL Group Inc. and announced that he would sell his interests in the company to his three sons, saying that his ownership would "provide an unnecessary distraction during the leadership race."

Throughout the 1990s, CSL Group Inc. oversaw the reflagging of several former Canadian-registered vessels which were placed under the shipping registries of nations commonly referred to as flags of convenience, where safety and labour laws were relaxed to be more business-friendly. Canadian crews were replaced with cheaper Ukrainian ones.

In the early 2010s, CSL introduced two new classes of vessels, both named the Trillium class. Baie St. Paul, commissioned in 2012, was the first lake freighter Trillium-class ship. The other ships in this fleet, Whitefish Bay, Thunder Bay and Baie Comeau, were commissioned in 2013.

The first of two Trillium-class bulk vessels, CSL Welland departed Yangfan Shipyard in early November 2014, and reached Montreal on January 2, 2015. The second one, CSL St-Laurent, passed through the Panama Canal in January 2015.

Item ordered may not be exact piece shown. All original and authentic.
OUT OF STOCK
Request re-stock notice?
Email this to a friend
Request Info
Previous Item (Detroit and Cleveland Navigation Co. - Specimen Stock)    (Cluett, Peabody and Co., Inc. - Specimen Stock) Next Item