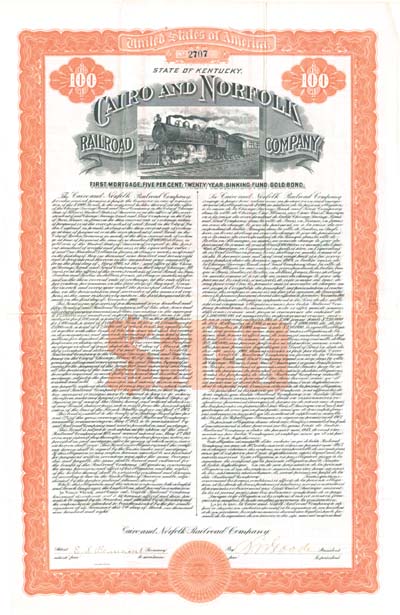 $100 5% Gold Uncanceled Bond. Written in both English and French. Collins Prss. 30 or so coupons.

Cairo & Norfolk.It is the Intention of this new company to build an independent trunk line from the Mississippi river at or near the mouth of the Ohio in Kentucky through Kentucky and Virginia to the Atlantic seaboard at Norfolk, Va., about 850 miles. Branch lines aggregating 700 or 800 miles are also planned as feeders. The plans for immediate work contemplate the construction of about 400 miles of main line from Wlckliffe and Fort Jefferson, Ky., about four miles south of Cairo, 111., to some point on the Kentucky-Virginia line, probably Bristol. Preliminary lines have been run over the territory and it is stated that a direct route is easily obtained with low grades and every advantage to heavy traffic. It is the intention to construct the line according to most approved standards with heavy rail, steel and concrete bridges and rock ballasted track. The route lies through a large number of thriving towns in Kentucky and traverses the rich tobacco growing sections of the state. L. W. Goode, president, 111 Broadway, New York.**** (Noted April 10, 1908.)

In relation to the Cairo and Norfolk Railroad Company, the Chicago Building or Chicago Savings Bank Building is an early skyscraper, built in 19041905. It is located at 7 W. Madison Street, Chicago, Illinois. It was designed by architectural firm Holabird & Roche, it is an early and highly visible example of the Chicago school of architecture. This bank was the registered holder of the monies and bonds for this railroad.

The building's features characterize this style through the use of large "Chicago windows", metal frame construction, distinctive bays, and terra cotta cladding. The combination of the north side projecting bay windows, and the east side rectangular "Chicago windows" with movable sashes is representative of the two typical Chicago school window types. The building is prominently located on the southwest corner of State Street and Madison Street, with visibility increased by an offset in the alignment of State Street.

The building is a critical component of a grouping of significant structures, including Carson Pirie Scott and the former Mandel Brothers Store, at what was once labeled the "World's Busiest Corner". The building was designated a Chicago landmark on March 26, 1996. In 1997, it was converted to a dormitory for the School of the Art Institute of Chicago. The corner of the 3rd floor of the Chicago Building contains the cornerstone of Chicago. It is the 0-0 degree point of the city, and is the location from which all addresses in Chicago begin.