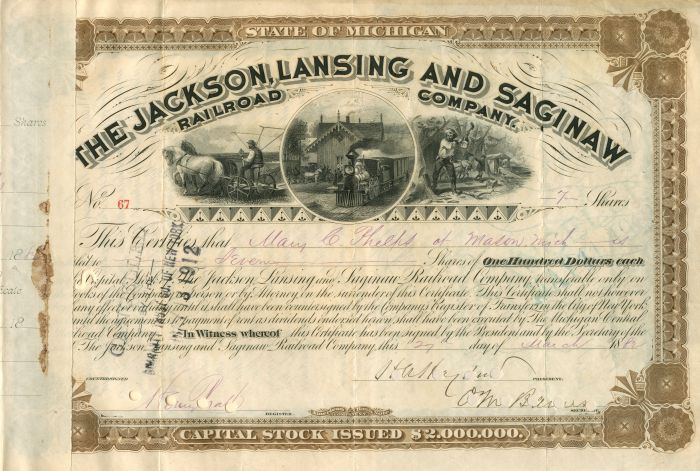 Stock signed at back by Cornelius Vanderbilt II.

Noted Financier and Head of the House of Vanderbilt in the third generation. He was the favorite grandson of Cornelius Vanderbilt, who left him $5 million, and the eldest son of William Henry Vanderbilt, who left him close to $70 million. In his turn he succeeded them as head of the New York Central and related railroad lines in 1885. He had a reputation as something of a workaholic, though a stroke in 1896 compelled him to reduce his active business involvement. Though retired from active control he took an advisory role in the many properties in which he, and the family, had made investments. Regarded as a capable and conservative railroad manager, and a splendid accountant; mastering the intricacies of the banking system during his association with the Shoe and Leather Bank of New York. Between 1885 and his untimely death in 1899 the stock of the leading railroads, with which the Vanderbilt name was then identified, had enhanced in value to the amount of $173,497,000. over their worth at the time he assumed control. Kindly, charitable, and democratic, he held the respect of employees at all levels of the Vanderbilt railroad interests. This Cornelius, deriving no pleasure in yachting, or the Turf, sought the satisfactions of philanthropy, fine music, good paintings and exquisite architecture. He married Alice Claypoole Gwynne (1852-1934). Their eldest son William Henry Vanderbilt II (1870-1892) died while a junior at Yale University, and Cornelius endowed a large dormitory there. He disinherited his second son Cornelius Vanderbilt III (1873-1942) for marrying without his approval. Third son Alfred Gwynne Vanderbilt (1877-1915) went down with the RMS Lusitania. His remaining son was Reginald Claypoole Vanderbilt. His daughters were Gertrude Vanderbilt Whitney and Countess Gladys Vanderbilt Széchenyi. The fabulous Fifth Avenue mansions he, his brothers, and his sons lived in have been demolished, but the Newport, Rhode Island vacation home he built, The Breakers, still stands as a memory of the lifestyle of Cornelius Vanderbilt II. On his death, family leadership passed to his brother, William Kissam Vanderbilt. His philanthropy had been such that he did not increase the wealth that had been left to him.