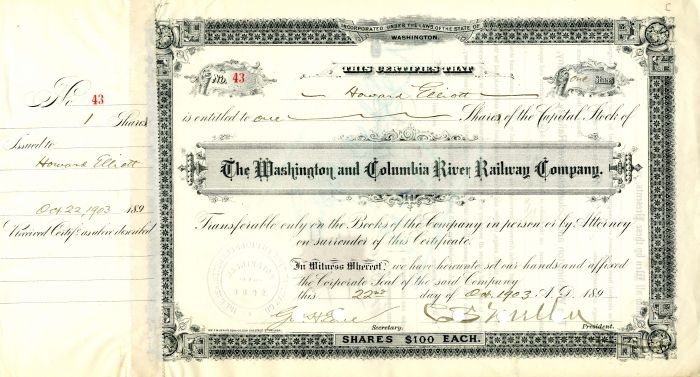 Stock signed by Geo. H. Earle as secretary and twice on the back and C.S. Mellen as president. Issued to and signed by Northern Pacific president Howard Elliott.

Charles Sanger Mellen (1852-1927) was an American railroad man whose career culminated in the presidencies of the Northern Pacific Railway 1897-1903 and the New York, New Haven and Hartford Railroad 1903-1913. Mellen was born in Lowell, Mass. His family soon moved to Concord, N.H. where he attended high school. Rather than attending college, he began his railroad career as a clerk at the Northern New Hampshire Railroad in Concord in 1870. After a short time at the Central Vermont Railroad and back to the Northern New Hampshire Railroad, he moved to the Boston and Lowell Railroad (B&L) where he was promoted to Superintendent. The Boston and Lowell enjoyed revenues from leasing use of its lines into Boston to the Boston and Maine Railroad. Its policies led the B&M to build its own line into Boston and to fight with the B&L to the New Hampshire courts. Mellen was the President of the B&L when it lost its court case, and ceased independent operations in 1887 when it was leased to the Boston and Maine Railroad. In 1892, he became general manager of the New York and New England Railroad, during a time when it was engaged in a bitter war with the New Haven. Charles P. Clark, the New Haven's president, hired him away from his competitor in November 1892. Mellen later testified that "[Clark] said I was too much of a nuisance on the New England." Mellen came to the attention of J. P. Morgan when he drove such a hard bargain with the New York Central that Chauncey Depew complained to Morgan, a director of both the New Haven and the New York Central. Morgan's bank had become receiver of the Northern Pacific in August 1893. Mellen had an active role in the reorganization and became president of the NP when it emerged from receivership in 1896. During his tenure there, NP's gross revenue increased by 156%, some of the increase at the expense of the Great Northern Railroad (GN), part of the same supposedly anti-competitive Northern Securities Company as the NP. Furthermore James J. Hill, founder of the GN and part of the Trust, called Mellen and his Morgan-appointed predecessor there "overrated underachievers". But by this time Mellen had become a staunch Morgan man. But yet he was not fully informed about the machinations of Morgan, Hill, and Harriman concerning stock in his company. On Monday, May 6, 1901 the Morgan interests were buying up NP stock. On Tuesday Mellen wired an NP vice president in New York "Cannot you give me some idea what is transpiring, to explain tremendous movement our stock?" By 1903 Morgan's priorities had changed. Upon assuming the New Haven presidency in Mellen undertook a program of "Morganization" of transportation in New England that extended from railroads to steamship lines and street railways. The New Haven even bought control of the chronicly unprofitable New York, Ontario and Western RR. His approach was marked by high prices for acquisitions, costly construction, and high debt levels. The failed Morganization of the New Haven was among the great embarrassments to the Morgan interests. The Mellen-Morgan policies led to the New Haven's future financial troubles, culminating in bankruptcy in 1935. Mellen's Morganization efforts in New England also put him in executive positions at the Maine Central RR, the New York, Ontario and Western RR, and the Boston and Maine RR. J. P. Morgan was aged and ill when the difficulties of the New Haven and other efforts led him to be summoned to give testimony before the Pujo Committee. Morgan died 1913-03-31. Mellen shouldered the burden of testifying and faced indictments. He provided colorful testimony concerning nearly $10,000,000 disbursed in connection with acquiring the franchise for the New York, Westchester and Boston Railway and resolving a franchise dispute with the New York and Portchester Railroad.