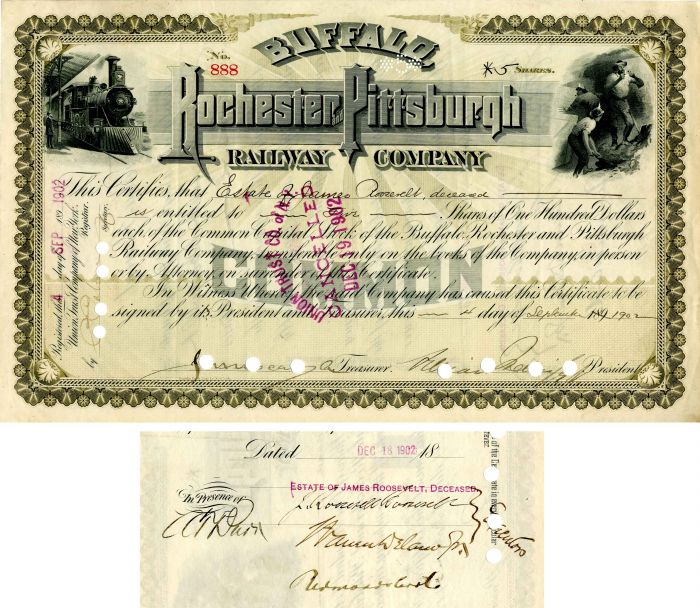 Stock issued to J. Roosevelt Roosevelt and signed at back.

James Roosevelt Roosevelt (1854-1927) James Roosevelt "Rosy" Roosevelt (April 27, 1854  May 7, 1927) was an American diplomat and the older half-brother of President Franklin Delano Roosevelt (FDR). He was the son of James Roosevelt I (18281900) and his first wife, Rebecca Brien Howland (18311876), who were second cousins. Rosey has been described as "an aimless if charming member of New York society's sporting set." He served as Secretary of the United States Legation in Vienna and as Secretary of the Embassy in London. When his father died in 1900, the estate was split between Rosy and FDR. On November 18, 1878, Rosy married Helen Schermerhorn Astor (November 27, 1855  November 12, 1893), the second daughter of businessman William Backhouse Astor, Jr. (18291892) and socialite Caroline Webster "Lina" Schermerhorn (18301908). Roosevelt and Helen had two children: James Roosevelt "Tadd" Roosevelt, Jr. (August 20, 1879  June 7, 1958) Helen Rebecca Roosevelt (September 26, 1881  July 8, 1962) After Helen's death, Roosevelt married Elizabeth Riley in 1914. She died in 1948. Since he and Franklin had never been particularly close, Franklin found himself surprisingly saddened by Rosy's death.