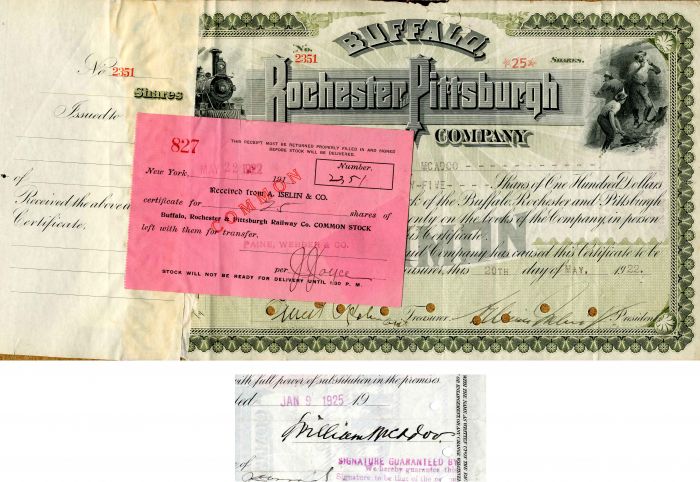 Stock issued to and signed by Wm. McAdoo. William Gibbs McAdoo, Jr. (October 31, 1863  February 1, 1941) was an American lawyer and political leader who served as a U.S. Senator, United States Secretary of the Treasury and director of the United States Railroad Administration (USRA). By virtue of his position as Secretary of the Treasury, in August 1914, he served as an "ex-officio member" on the first Federal Reserve Board in Washington, DC.

McAdoo was born near Marietta, Georgia, to author Mary Faith Floyd and attorney William Gibbs McAdoo. He graduated from the University of Tennessee and is an initiate of the Kappa Sigma Fraternity Lambda Chapter at the University of Tennessee. He was appointed deputy clerk of the United States District Court for the Eastern District of Tennessee in 1882. He married his first wife, Sarah Hazelhurst Fleming, on November 18, 1885. They had seven children.

He was admitted to the bar in Tennessee in 1885 and set up a practice in Chattanooga, Tennessee. In the early 1890s, he lost most of his money trying to electrify the Knoxville Street Railroad system. In 1892 he moved to New York City, where he met Francis R. Pemberton, son of the Confederate General John C. Pemberton. They formed a firm, Pemberton and McAdoo, to sell investment securities.

In 1895, McAdoo returned to Knoxville and regained control of part of his bankrupt streetcar company (which had been auctioned off). In subsequent months, he engaged in a continuous struggle with Ohio businessman C.C. Howell over control of the city's streetcar system, culminating in a bizarre incident known as the Battle of Depot Street. Litigation in the aftermath of this incident favored Howell, and McAdoo abandoned his streetcar endeavors in 1897 and returned to New York.

Around the start of the 20th century, McAdoo took on the leadership of a project to build a railway tunnel under the Hudson River to connect Manhattan with New Jersey. A tunnel had been partly constructed during the 1880s by Dewitt Clinton Haskin. With McAdoo as President of the Hudson and Manhattan Railroad Company, two passenger tubes were completed and opened in 1908. The popular McAdoo told the press that his motto was "Let the Public be Pleased." The tunnels are now operated as part of the Port Authority Trans-Hudson (PATH) system.

His first wife died in February 1912. That year, he served as vice chairman of the Democratic National Committee. In March 1919, McAdoo co-founded the law firm McAdoo, Cotton & Franklin, now known as white shoe firm Cahill Gordon & Reindel. He left the firm in 1922 and moved to California to continue his political career.

Woodrow Wilson lured McAdoo away from business after their meeting in 1910. He worked for the Wilson presidential campaign in 1912. Once he was President, Wilson appointed McAdoo Secretary of the Treasury, a post McAdoo held from 1913 to 1918.

He married Wilson's daughter Eleanor Randolph Wilson at the White House on May 7, 1914. They had two daughters. McAdoo offered to resign when he married the Presidents daughter but Wilson urged him to complete his work of turning the Federal Reserve System into an operational central bank. The legislation establishing the System had been passed by Congress in December 1913.

After the United States entered World War I in April 1917, the United States Railroad Administration was formed to run Americas transportation system during the war. McAdoo was appointed Director General of Railroads, a position he held until November 1918 when the armistice was declared, ending World War I.