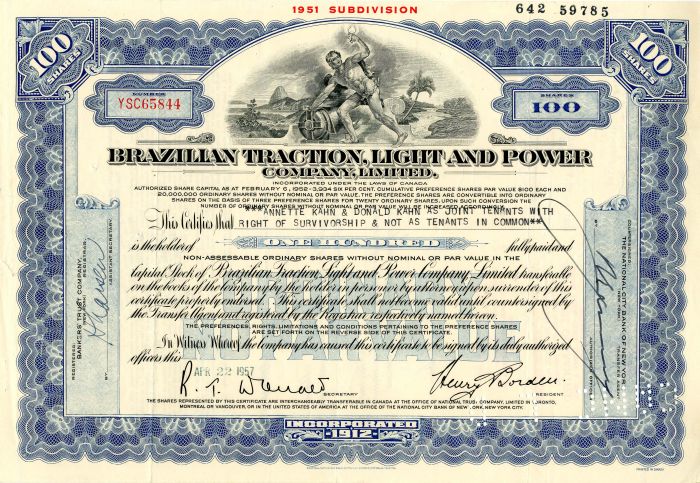 The company was founded in 1899, as the São Paulo Tramway, Light and Power Company by William Mackenzie and Frederick Stark Pearson. Operating as in construction and management of electricity and transport infrastructure in Brazil.

In 1904, the Rio de Janeiro Tramway, Light and Power Company was founded by Mackenzie's group.

In 1912, Brazilian Traction, Light and Power Company was incorporated in Toronto as a public company to develop hydro-electric power operations and other utility services in Brazil, becoming a holding company for São Paulo Tramway Co. and Rio de Janeiro Tramway Co.

In 1916, Great Lakes Power Company was incorporated to provide hydro-electric power in Sault Ste. Marie and the Algoma District in Ontario.

In 1979, the company's Brazilian assets were transferred to Brazilian ownership (Eletropaulo and Light S.A.), the company meanwhile having diversified to other areas. The company provided electricity and tram services in São Paulo and Rio de Janeiro, and the Brazilian side after a later restructuring still operates as Light S.A., short for Brazilian Traction, Light and Power Co. Ltd.

In 2005, after 37 years, Brascan Corp. was renamed to Brookfield Asset Management Inc.

In 2020, in response to the COVID-19 pandemic, Brookfield's CEO, Bruce Flatt, assessed that the economic fallout was "much more manageable" than previous meltdowns.

In October 2020, Mark Carney departing Governor of the Bank of England, became a vice-chair of Brookfield, leading the firm's environmental, social and governance (ESG) and impact fund investment strategy.

In November 2008, in a process supervised by the Alberta courts, PricewaterhouseCoopers (PwC) was appointed receiver of a separate public company, Birch Mountain Resources, after Birch Mountain had defaulted on its debts. Birch Mountain's assets of $50 million were transferred to Tricap Partners Ltd, which operates under the Hammerstone Corporation, a subsidiary of Brookfield Special Situations Group. In September 2010, a group called Birch Mountain Shareholders for Justice filed a lawsuit with the Superior Court of Justice in Ontario, Canada, against Brookfield Asset Management challenging this acquisition and transfer of assets. After five years of litigation the case was dismissed. In May 2015, the plaintiffs filed a notice of appeal which was also dismissed.

In 2009, Brookfield sued financial and insurance giant American International Group (AIG) in a Manhattan federal court, alleging that AIG's collapse caused default provisions in interest-rate swaps. The suit stemmed from AIG's acceptance of a $182.3-billion bailout package from the federal government. The lawsuit backfired and the litigation ended with Brookfield agreeing to pay $905 million to settle the lawsuit.

In 2013, a Brazilian prosecutor filed charges against the company's local division, alleging the company paid bribes to local officials, which is also a violation of U.S. federal criminal law. The bribes were allegedly used to pave the way for Brookfield to build a shopping center in São Paulo. The U.S. Securities and Exchange Commission also opened a formal investigation into the company about the bribery charges. The company denied the charges. The U.S. Department of Justice also opened a criminal investigation into the company regarding these allegations, and did not end up making any arrests. According to the Stanford Law School Foreign Corrupt Practices Act Clearinghouse, which studied the case, the investigation and filing of charges was initiated by a whistleblower and anonymous tip. The company disclosed the investigations on several 6-K forms between 2013 and 2015.

In August 2018, Brookfield signed a 99-year lease on Jared Kushner's financially troubled 666 Fifth Avenue skyscraper. The deal raised suspicions that the Qatar Investment Authority, a major investor in Brookfield, was attempting to influence the Trump administration.

In November 2020, it was revealed that Brookfield might be partnering with telecommunications giant Rogers Communications to introduce condominiums to the site of the Rogers Centre, halving the space available for sport. The original multi-purpose stadium and its land cost $570 million, significantly funded by taxpayers, yet was sold 15 years later to Rogers for just $25 million.

In February 2021 Mark Carney, Vice Chairman and Head of Impact Investing and ex Governor of the Bank of England, had to retract an earlier claim that the $600bn Brookfield Asset Management portfolio was carbon neutral. He based his claim on the fact that Brookfield has a large renewable energy portfolio and "all the avoided emissions that come with that. The claim was criticized as accounting tricks as avoided emissions do not counteract the emissions from investments in coal and other fossil fuels responsible for a carbon footprint of about 5,200 metric tons of carbon dioxide.