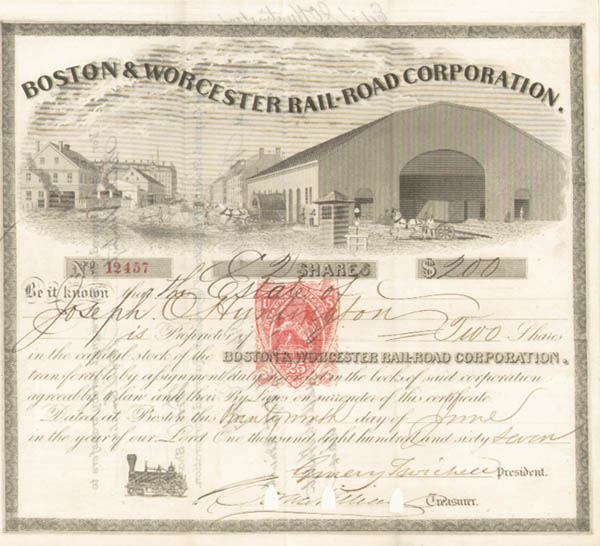 In Newton, the B&W was granted a franchise in exchange for constructing a 90-foot (27 m) wide boulevard, of which it ran down the median. The B&W also carried freight.

The Boston and Worcester Street Railway was chartered November 16, 1901. Service between Boston and Framingham Junction began on May 5, 1903. (The line operated over the Boston Elevated Railway in Brookline and Boston; these trackage rights had been granted in December 1900 after a brief controversy.) Service between Worcester and Chestnut Hill began on July 1, 1903; WorcesterBoston service began five days later. Running time between the terminal was two hours and fifteen minutes; this was slower than Boston and Albany Railroad trains, but the B&W cost 40 cents versus the railroad's one-dollar fare. Service operated every half-hour, with short turn cars providing fifteen-minute frequency east of Framingham.

Boston and Worcester Electric Companies was incorporated December 29, 1902 to serve as a holding company. The B&W arranged control of several connecting roads in 1899 and purchased them in 190304:

The B&W opened a short branch to Natick Center in 1909.

In 192526, the B&W attempted to replace its entire service with buses, but was rebuffed by Brookline. However, the FraminghamFramingham Centre and Framingham JunctionSaxonville routes were replaced by buses on June 13, 1925. On July 3, 1926, the B&W began operating a BostonWorcester bus line that followed the turnpike west of Shrewsbury, and the Post Road east of Northborough. The Hudson branch was replaced by buses in April 1928, followed by the Natick branch on October 15. Framingham JunctionFramingham service ended in September 1930. The line was cut back to Framingham on January 15, 1931, as paving of the turnpike progressed eastward, with buses replacing the western half. On June 11, 1932, the eastern half of the line was replaced with buses as well.

The main line ran along the old Boston and Worcester Turnpike (Route 9) except in the following places:

The section in Worcester was on trackage rights from the Worcester Consolidated Street Railway (on their "City Hall and Lake" line), and in Boston it used the tracks of the Boston Elevated Railway.

At Framingham Junction, the crossing with current Route 126 in Framingham, many cars from Boston turned south to end at downtown Framingham ("South Framingham"). This junction was at the crossing of the older Framingham Union Street Railway line to Saxonville.

The other lines were as follows:

Other local routes may have existed.

The following interchange points with other companies were provided: