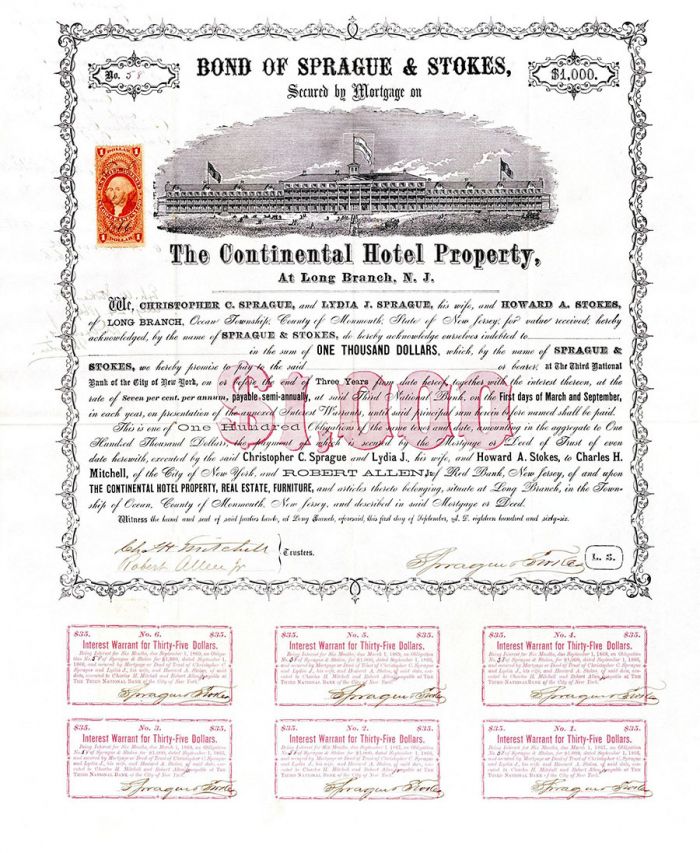 Long Branch was a beach resort town in the late 18th century, named for its location along a branch of the South Shrewsbury River. In the 19th century, theatrical performers of the day often gathered and performed there. It was visited by presidents Chester A. Arthur, James A. Garfield, Ulysses S. Grant, Benjamin Harrison, Rutherford B. Hayes, William McKinley and Woodrow Wilson. Seven Presidents Park, a park near the beach, is named in honor of their visits. The Church of the Presidents, where all seven worshiped, is the only structure left in Long Branch associated with them.

President Grant and his family summered at their beachfront cottage in Long Branch the first year of his presidency in 1869 and for most of the rest of Grant's life. During this time, Long Branch came to be called the "summer capital". President James A. Garfield was brought to Long Branch in the hope that the fresh air and quiet might aid his recovery after being shot on July 2, 1881, an incident that left the assassin's bullet lodged in his spine. He died here on September 19, 1881, exactly two months before his 50th birthday. The Garfield Tea House, constructed from railroad ties that had been laid to carry Garfield's train, is in Elberon.

The famous Long Branch Saloon of the American Old West, located in Dodge City, Kansas, was given its name by its first owner, William Harris, who had moved west from Long Branch, New Jersey, his hometown.

Originally a resort town with a few hotels and large estates and many farms in the early 20th century, Long Branch grew in population. Italian, Irish and Jewish immigrants settled in during this period. During the 1930s, the city used government policies to enforce racial segregation against Blacks at local beaches, assigning all black applicants for beach passes to a single, segregated beach.

By the 1950s, Long Branch like many other towns had developed new residential spots and housing to make room for the growing population. Many of the former farms of Long Branch were transformed into residential suburbs. Many of the estates and a few old historic resorts (with the addition of many new ones) still remain.

In the early 20th century, Long Branch lost much of its activity as a theater spot. In addition, the opening of the Garden State Parkway in the mid-1950s allowed shore visitors to access points further south, which added to Long Branch's decline. The civil unrest of the 1960s caused riots in neighboring Asbury Park, and many fled the shore cities for the suburban towns west of the beach. Decades later, the older, more dilapidated parts of the resort town were condemned and redeveloped, in part by using eminent domain legislation.

Long Branch still continues to be a popular resort area. Many people from New York City travel or settle into the area to escape the crowded city and enjoy Long Branch's beaches. The area also attracts some tourists from the Philadelphia area as well.

On October 29, 2012, Long Branch was one of many shore communities that were devastated by Hurricane Sandy. Although Sandy's winds were powerful, Long Branch's position between Long Beach Island and Sea Bright gave Long Branch a much larger wall of security because it could not be engulfed by surrounding waters. Despite this mainland advantage, there were still several instances of flooding in Long Branch during the storm. Many residents went without electricity for as long as two weeks. The boardwalk was destroyed; the city began rebuilding it in 2015, and it reopened in April 2016, making it the last boardwalk damaged by Sandy to be rebuilt.