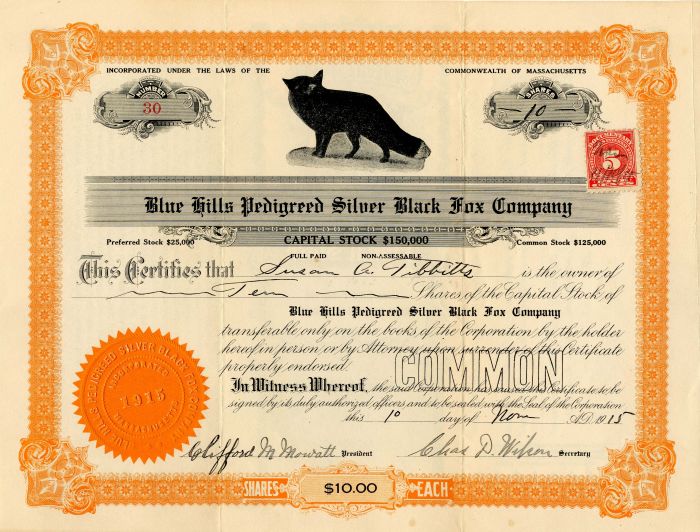 Stock printed by Goes. Included is letter to stockholders.

The silver fox is a melanistic form of the red fox (Vulpes vulpes). Silver foxes display a great deal of pelt variation. Some are completely glossy black except for a white colouration on the tip of the tail, giving them a somewhat silvery appearance. Some silver foxes are bluish-grey, and some may have a cinereous colour on the sides.

Historically, silver foxes were among the most valued fur-bearers, and their pelts were frequently worn by nobles in Russia, Western Europe, and China. Wild silver foxes do not naturally reproduce exclusively with members of the same coat morph and can be littermates with the common red variety, although captive populations bred for their fur and as pets are almost exclusively mated with members of the same colour.

The silver fox's long outer hair can extend as much as two inches (5.1 cm) beyond the shorter underfur on different parts of the fox's body, particularly under the throat, behind the shoulders, on the sides and the tail. The hair of the underfur is brown at the base, and silver-grey tipped with black further along the follicle. The hair is soft, glossy and was once reputed to be finer than that of the pine marten. The uniformly blackish brown or chocolate coloured underfur, which is unusually long and dense, measures in some places two inches and is exceedingly fine. It surrounds the whole body even to the tail, where it is a little coarser and woollier. The fur is shortest on the forehead and limbs, and is finer on the fox's underbelly. When viewed individually, the hairs composing the belly fur exhibit a wavy appearance. There are scarcely any long hairs on the ears, which are thickly clothed with fur. The soles of the feet are so thickly covered with woolly hair that no callous spots are visible. Silver foxes tend to be more cautious than red foxes.

When bred with another member of the same colour morph, silver foxes will produce silver-coated offspring, with little variation in this trend after the third generation. When mated to pure red foxes, the resulting cubs will be fiery red in overall coat colour, and will have blacker markings on the belly, neck and points than average red foxes. When one fiery red fox of such a pedigree is mated with a silver one, the litter is almost always 50% silver and 50% red, manifesting as a Mendelian incomplete dominant trait. Fiery red parents may occasionally produce a silver cub, the usual proportion being one in four. Occasionally, the colours of mixed foxes blend rather than segregate. The blended offspring of a silver and red fox is known as a cross fox.