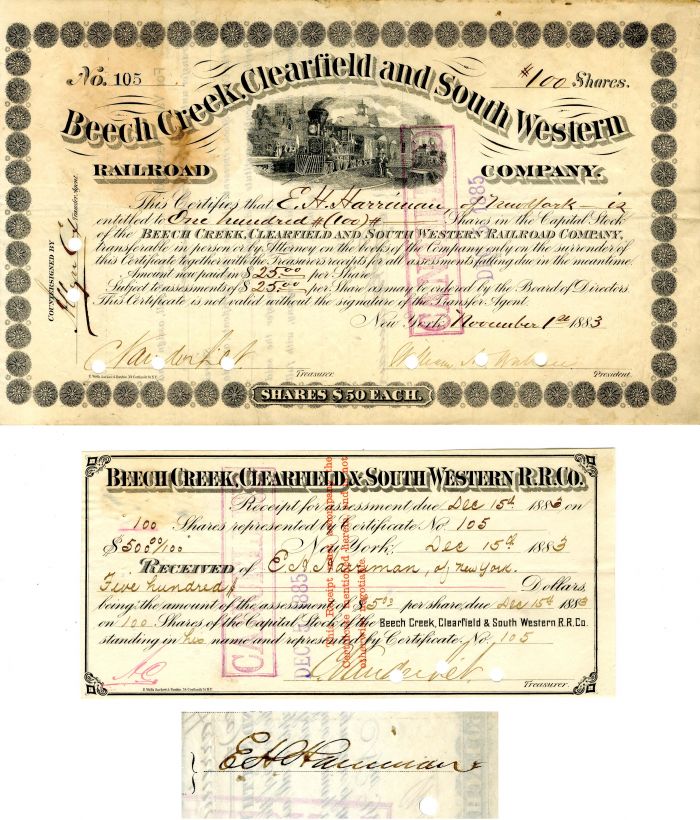 Cornelius Vanderbilt (1843-1899), Stock of the Beech Creek, Clearfield and South Western Railroad Co., NY. Signed by Cornelius Vanderbilt as Treasurer. He also signs a second matching "Receipt for assessment". Both dated early 1880's and have hole cancelled signatures but each is decent and clear. Includes nice portrait of Cornelius. Excellent Condition. Quite Rare!. From the Syracuse University Collection. The Pair.

Construction began at the end of 1882, starting at the town of Beech Creek and proceeding west along the creek to Mountaintop, in the vicinity of Snow Shoe. The company changed its name to the Beech Creek, Clearfield, and South Western Railroad on March 20, 1883. Around this time, it increased the stock issue to $5,000,000 and issued an additional $5,000,000 in fifty-year bonds. The Clearfield Bituminous Coal Company signed a contract to ship exclusively over the new railroad, and George Magee was appointed general contractor for construction. The new line was built to high standards in anticipation of heavy coal traffic. It eschewed severe grades, at the cost of extensive curvature and bridges as it followed Beech Creek, and the 347 feet (106 m) Hogback tunnel, which cut across a loop of the creek, about halfway up the climb out of the watershed at Hurxthal's Summit. Tracklaying began in September of 1883. In the meantime, construction began on the 1,277 feet (389.2 m) Peale tunnel 8 miles (10 km) west of the summit, on the descent approaching Moshannon Creek. Undertaken by the well-known railroad contractors P & T Collins, tunneling began on June 24, 1883 and the bore was holed through on October 30. It was ready for rail traffic by the middle of the next year. 2 miles (3 km) further west, the line crossed the creek on an iron viaduct 112 feet (34.1 m) high, opened for service on November 11, 1884.