Baumann Mines Co. Issued to and Signed by Jules Baumann 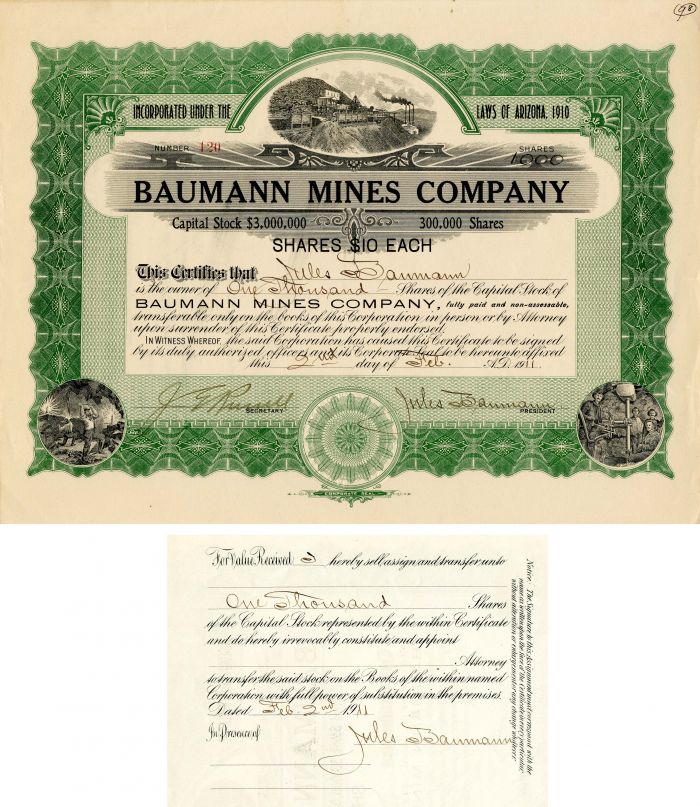 Years: 1911
Stock issued to and signed on front and back by Jules Baumann as president. He was born in Chur, Switzerland in 1855. At the age of 22 he sailed to New York. An older cousin, Daniel Hatz, had been a member of the Walker Party and was in the hotel and restaurant business in Prescott. He encouraged Jules Baumann to join him which he did arriving in 1879. In 1892, in partnership with George S. Porter, Jules started a candy factory. Accounts in the Journal Miner state that this is the first candy factory in Prescott. In May 1891 Mr. Baumann produced a panoramic view of Prescott in color. In addition to the streets, he included the more prominent buildings. While visiting the Grand Canyon in 1904 he painted some views of the canyon. One of these, titled The Grand Canyon of Arizona, became well known. Mr. Baumann spent as much time as possible prospecting for minerals. In order to raise the money needed for development of the mine he staked called "Swiss Girl" he formed a corporation called the Baumann Copper Company. Sometime in the Fall of 1909 the Baumann Copper Company was dissolved and a new company, Baumann Mines Company, was formed in March 1910. He continued to live and work at the mine until his death in November 1929 at the age of 74. Mr. Baumann was known as "A Man of Many Talents".
Condition: Excellent