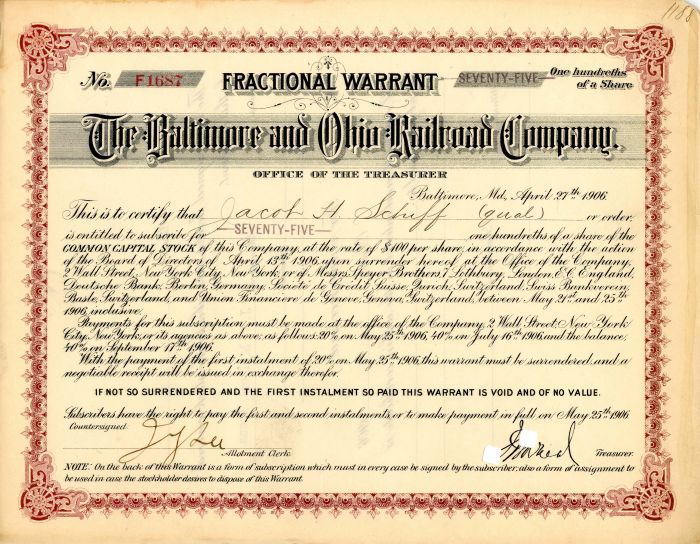 Stock issued to but not signed by Jacob H. Schiff.

Jacob Henry Schiff (born Jakob Heinrich Schiff; January 10, 1847  September 25, 1920) was a German-born American banker, businessman, and philanthropist. Among many other things, he helped finance the expansion of American railroads and the Japanese military efforts against Tsarist Russia in the Russo-Japanese War. Born in Frankfurt, Germany, Schiff migrated to the United States after the American Civil War and joined the firm Kuhn, Loeb & Co. From his base on Wall Street, he was the foremost Jewish leader from 1880 to 1920 in what later became known as the "Schiff era", grappling with all major Jewish issues and problems of the day, including the plight of Russian Jews under the Tsar, American and international anti-semitism, care of needy Jewish immigrants, and the rise of Zionism. He also became a director of many important corporations, including the National City Bank of New York, Equitable Life Assurance Society, Wells Fargo & Company, and the Union Pacific Railroad. In many of his interests he was associated with E. H. Harriman.  Schiff was educated in the schools of Frankfurt and was first employed in the banking and brokerage business as an apprentice in 1861. After the American Civil War had ended in April, 1865, Schiff came to the United States, arriving in New York City on August 6. He became a broker on November 21, 1866, and joined the firm of Budge, Schiff & Company in 1867. He became a naturalized citizen of the United States in September 1870. Upon the dissolution of Budge, Schiff & Company in 1872, Schiff decided to return to Germany. In 1873 he became manager of the Hamburg branch of the London & Hanseatic Bank. He returned to Frankfurt, however, upon the death of his father later that year. In 1874 Abraham Kuhn of the banking firm of Kuhn, Loeb & Company invited him to return to New York and enter the firm. Along with H. B. Claflin, Marcellus Hartley, Robert L. Cutting, and Joseph Seligman, he was a founder of the Continental Bank of New York in August 1870. Schiff accepted Kuhn's invitation in January 1875, bringing to Kuhn, Loeb & Company his connections with Sir Ernest Cassel of London, Robert Fleming of Dundee (later of London), and Edouard Noetzlin [fr] of the Banque de Paris et des Pays-Bas. On May 6, 1875, he married Therese Loeb, daughter of Solomon Loeb. The couple were the parents of a son, Mortimer L. Schiff and a daughter, Frieda. In 1885 Schiff became head of Kuhn, Loeb & Company. Besides financing such Eastern railroads as the Pennsylvania and the Louisville & Nashville, he took part in the reorganization of the Baltimore & Ohio Railroad in 189699, and at various times aided the American Smelting & Refining Company (ASARCO), the Westinghouse Electric Company, and the Western Union Telegraph Company. Less fortunate was his share in the reorganization in 1902 of the Metropolitan Street Railway of New York. He became associated with E. H. Harriman in notable contests with James J. Hill and J.P. Morgan & Company for control of several Western railroads. Schiff served as a director of the Equitable Life Assurance Society, National City Bank of New York, Central Trust Company, Western Union Telegraph Company, Union Pacific Railroad, Bond & Mortgage Guarantee Company, and Wells Fargo & Company. He was elected a director of Wells Fargo in September 1914 to succeed his brother-in-law, Paul Warburg, who had resigned to accept appointment to the original Federal Reserve Board. What was perhaps Schiff's most famous financial action was during the Russo-Japanese War, in 1904 and 1905. Schiff met Takahashi Korekiyo, deputy governor of the Bank of Japan, in Paris in April 1904. He subsequently extended loans to the Empire of Japan in the amount of $200 million (equivalent to $4.5 billion in 2018, through Kuhn, Loeb & Co. These loans were the first major flotation of Japanese bonds on Wall Street, and provided approximately half the funds needed for Japan's war effort. Schiff made this loan partly because he believed that gold was not as important as national effort and desire in winning a war, and due to the apparent underdog status of Japan at the time; no European nation had yet been defeated by a non-European nation in a modern, full-scale war. It is quite likely Schiff also saw this loan as a means of answering, on behalf of the Jewish people, the anti-Semitic actions of the Russian Empire, specifically the then-recent Kishinev pogrom of 1903. This loan attracted worldwide attention, and had major consequences. Japan won the war, thanks in large part to the purchase of munitions made possible by Schiff's loan.In 1905, Japan awarded Schiff the Order of the Sacred Treasure;[12] and in 1907, the Order of the Rising Sun, Gold and Silver Star, the second highest of the eight classes of that Order. Schiff was the first foreigner to receive the Order in person from Emperor Meiji in the Imperial Palace.[14] Schiff also had a private audience with King Edward VII of the United Kingdom in 1904. In addition to his famous loan to Japan, Schiff financed loans to many other nations, including those that would come to comprise the Central Powers. During World War I, Schiff urged U.S. President Woodrow Wilson and other Allied statesmen to end the war as quickly as possible, even without an Allied victory. He feared for the lives of his family, back in Germany, but also for the future of his adopted land. He arranged loans to France and other nations for humanitarian purposes, and spoke out against submarine warfare. Schiff made sure none of the funds from his loans ever went to the Russian Empire, which he felt oppressed Jewish people. When the Russian Empire fell in 1917, Schiff believed that the oppression of Jews would end. He formally repealed the impediments within his firm against lending to Russia.